'Chronic pain really challenges the medical model of health care': U of T experts talk about the opioid crisis 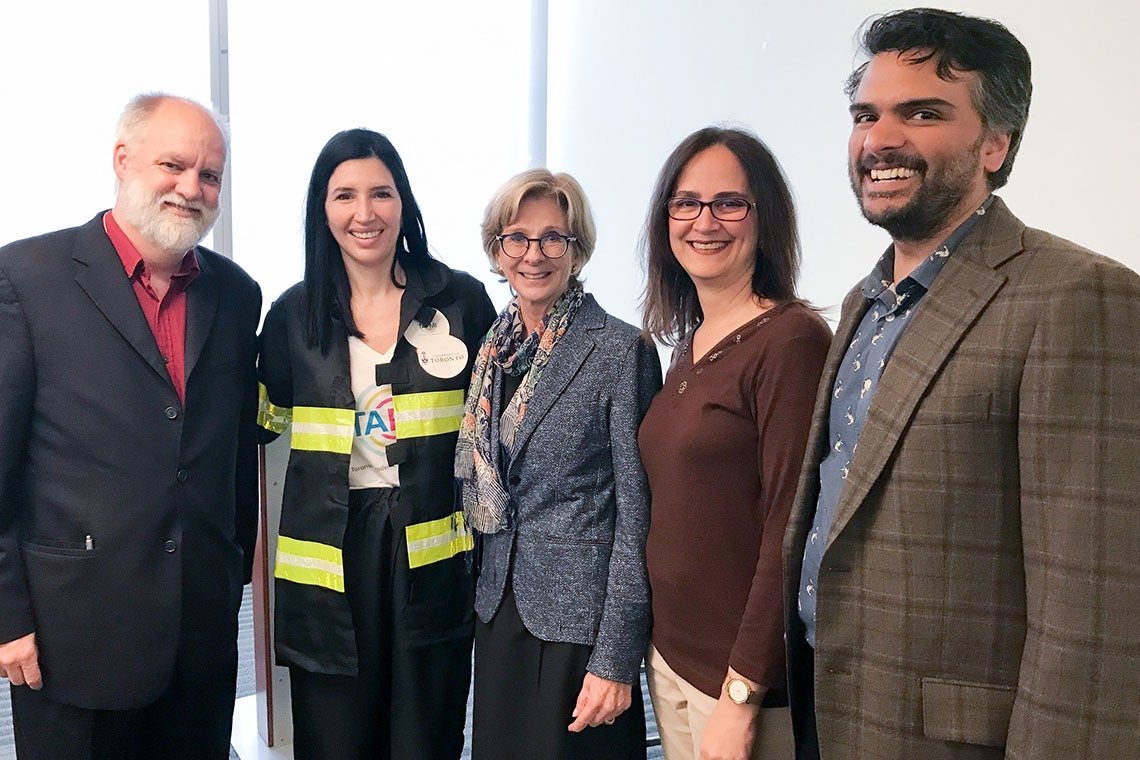 Tania Di Renna is dressed as a firefighter to drive home the analogy she is making about chronic pain.

“There’s no more fire, but her alarm bell is still ringing,” said the University of Toronto assistant professor of anesthesia in describing a breast cancer patient whose pain after a mastectomy has turned chronic. While the patient’s tissue seems to have healed after surgery, her “stove” is no longer on fire and her body’s nervous system is still sounding the alarm.

“Three months and five opioid prescriptions later, she still has pain,” said Di Renna. “She can’t hug her husband or kids, she is irritable, anxious and short. She’s not using her stove and everyone is going hungry.”

Di Renna was part of a recent Faculty of Medicine event called UofTMedTalks, moderated by Globe and Mail public health reporter André Picard, that explored what happens when pain is no longer a symptom but becomes the disease. With an estimated 20 per cent of Canadians suffering from chronic pain – and with more than 10,300 Canadians lost to opioid overdoses since 2016 – it’s a weighty question.

At the event, U of T pain experts from a number of specialties delved into the complexities of pain medicine, the opioid crisis and crucial advances in research, education and clinical care.

Di Renna described how the Toronto Academic Pain Medicine Institute (TAPMI), where she serves as medical director, is now the hub for chronic pain care in Toronto. “We try to get people to move again…to love their stove,” she said.

With the risk of acute pain during surgery developing into chronic pain, she stressed the key role of anesthesiologists in preventing its onset, through interventions before and during surgery.

Assistant Professor Judith Hunter of U of T's department of physical therapy spoke of changing the  curriculum to focus on cognitively targeted exercise as a way to retrain the brain and change pain. Family physician Abhimanyu Sud reflected on the importance of educating practitioners about safer opioid prescribing. Associate Professor Andrea Furlan of the department of medicine explained chronic pain as an invisible disability, and highlighted her work equipping health-care providers across Ontario to treat patients appropriately.

“What’s going on out there? Is it a war on drugs? An overdose crisis? A pain crisis? A war on pain patients?” asked Picard. “It’s one of the worst public health crises we’ve had in this country in modern times. It’s everywhere but it’s invisible at the same time.”

This invisibility struck Sud when reflecting on his time as a trainee on an emergency medicine rotation in 2008. He had been in the middle of an opioid crisis, but hadn’t realized it. It contrasted with the widespread awareness of the SARS outbreak. Now, as course director of the U of T Continuing Professional Development safer opioid prescribing program, Sud is helping increase education around opioids with medical practitioners.

“Chronic pain really challenges the medical model of health care. Chronic pain is subjective, and it’s not always obvious using the tools that we typically use in medical care, like MRIs and blood tests,” said Sud. “We’ve moved so far away from a holistic approach in medicine. My hope is that we can learn from the opioid crisis to reform and improve our care.”

This is the type of change Hunter has led in physical therapy education, informed by her PhD in pain neuroscience. “As physical therapists, we learned that pain reflects what’s going on in the tissues, and we use that to find the tissue at fault and fix it,” she said. “That works well in acute pain, but not in chronic pain.”

With physical activity recognized as the most effective treatment for a range of chronic pain conditions, the new curriculum teaches students to use physical exercises – not just to strengthen tissues, but to actually change processing in the nervous system. “And that’s not easy because it hurts for these people to move, and most fear that moving will cause further harm,” said Hunter.

Of course, this interdisciplinary care takes much more time and resources than prescribing a pill – in the short term at least. But not only have opioids led to addiction and our current health crisis, Furlan pointed out that they can also make the pain worse.

“If you give opioids when the alarm system is broken, you can make the alarm system even worse,” said Furlan, who is also a clinician and senior scientist at the University Health Network’s Toronto Rehabilitation Institute. As a physiatrist – a medical specialist focused on rehabilitation – she led the development of Canada’s opioid guidelines, and educates health providers across Ontario through Project ECHO, a virtual knowledge-sharing network.

She pointed out how hard it is to treat chronic pain effectively: “It takes five minutes to give an opioid prescription and the patient leaves happy. But it takes 30 minutes to say ‘no’ to a prescription. And then you have to find alternatives, including self-management, exercises, retraining the pain system.”

“It is in complex areas like this where research and education become so critically important, said Darina Landa, the Faculty of Medicine's executive director of Advancement. She described U of T’s strengths as Toronto’s only Faculty of Medicine within a leading network of affiliated hospitals and health care sites.

“We’re uniquely positioned at U of T to tackle some of health care’s most complex questions and challenges, such as pain medicine,” she said.