‘Chemo brain’ could be by-product of cancer: U of T research 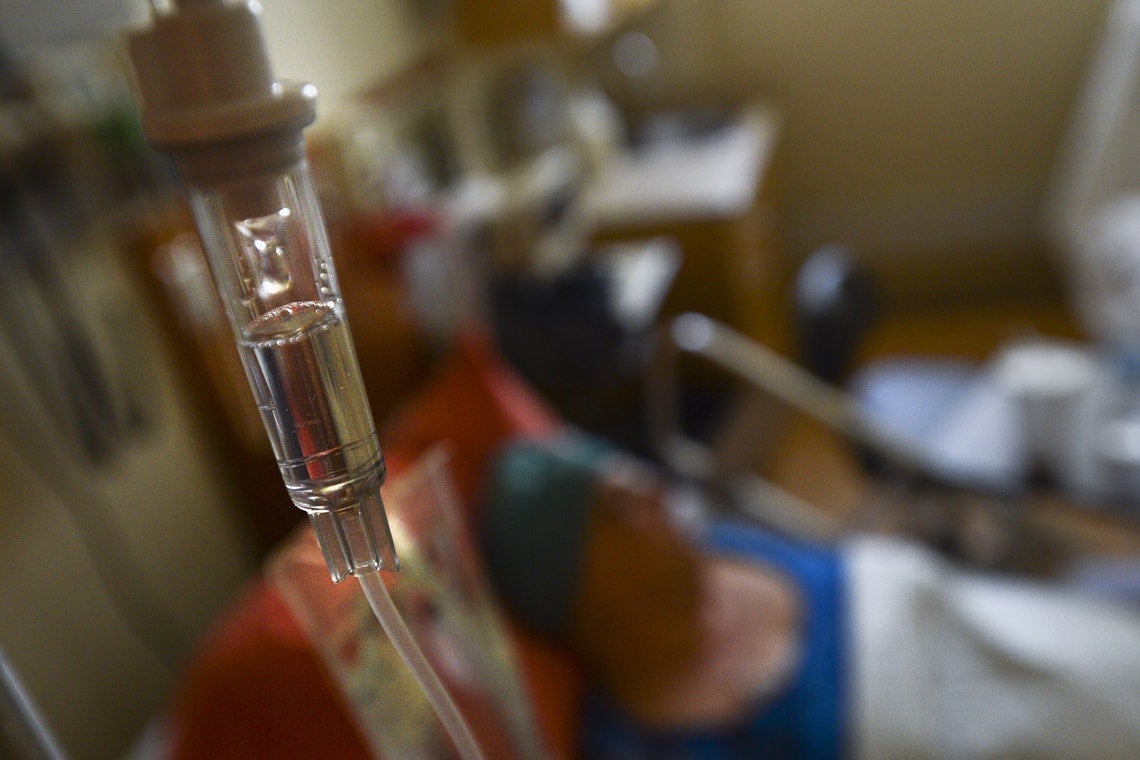 During chemotherapy, a cancer patient receives Paclitaxel. New research suggests “chemo brain” is not just a result of chemotherapy but may start with cancer (photo by Richard Lautens/Toronto Star via Getty Images)

The memory and cognitive challenges experienced by cancer survivors, known as “chemo brain” or “chemo fog,” are not just the result of chemotherapy, but could be a by-product of the cancer itself, according to University of Toronto research.

Researchers found that female mice with a form of breast cancer demonstrated impaired performance on learning and memory tests before chemotherapy drugs were administered. Their findings were recently published in the journal Neuroscience.

“Our work isolated that the cancer is responsible for some of the memory and thinking complaints experienced by cancer survivors, and that drug therapy adds to the problem,” says Gordon Winocur, a professor of psychiatry in U of T's Faculty of Medicine and senior scientist at Baycrest’s Rotman Research Institute. “Both factors independently affect brain function in different ways, which can lead to the development of other psychological disturbances, such as anxiety and depression.”

After chemotherapy, as many as 65 per cent of patients with breast cancer report memory lapses, difficulty concentrating, taking longer to complete tasks and difficulty multitasking, said Winocur, the study's author. Patients with other types of cancer have also reported similar problems.

Through the study, researchers were also able to pinpoint three different brain changes caused by the progression of cancer and the drugs used in treatment.

As the tumour develops, the body’s immune system responds by releasing cytokines to inhibit the cancer’s development. Researchers discovered that the body’s reaction causes inflammation in the brain’s nervous system, which impacts its function.

Chemotherapy, meanwhile, was found to limit the production of new brain cells in regions responsible for memory function, which leads to a loss of memory.

The combination of tumour growth and chemotherapy led to shrinkage in brain regions that are important for learning and memory.

“Our research found that the cancer and chemotherapy cause three separate, but related brain changes,” says Winocur. “Understanding the nature of the cognitive impairment and the underlying biological mechanisms are essential to the development of an effective treatment for chemo brain. Our work shows that a targeted approach addressing all three issues is necessary to successfully treat the condition.”

The study was conducted on female mice, half of them with cancer and the other half without. Scientists first administered a series of learning and memory tests to all the mice to investigate the impact of the tumour on brain function. After the initial data was collected, the mice either received the chemotherapy drugs, methotrexate and 5-fluouracil, or a saline solution. The mice were then retested on the same trials and some additional ones. Once testing was complete, brain images, tissue and blood samples were used to analyze changes to brain structure and cytokine activity, which is when proteins are released by the immune system to help fight off infections or diseases.

Researchers found that prior to treatment, mice with tumours performed worse on learning and memory tests compared to their normal counterparts. After chemotherapy, the performance of cancerous mice worsened and the non-cancerous mice also showed signs of cognitive impairment.

“People are living longer thanks to more effective chemotherapy and cancer treatments,” says Winocur. “Addressing chemo brain will help improve a patient’s quality of life since these side-effects can lead to emotional and mental health issues that affect a person’s ability to function in society.”

These findings lay the foundation for the development of targeted treatments. In previous work, Winocur demonstrated that drugs used to treat memory and thinking problems in Alzheimer’s disease and physical exercise can offset chemo brain’s impact. As next steps, he will investigate these effects in cancer survivors who complain of chemo brain following chemotherapy.

This study was done in collaboration with researchers at the Princess Margaret Cancer Centre and U of T, and supported by the Canadian Institutes of Health Research, the Canadian Cancer Society and the Canadian Breast Cancer Foundation.