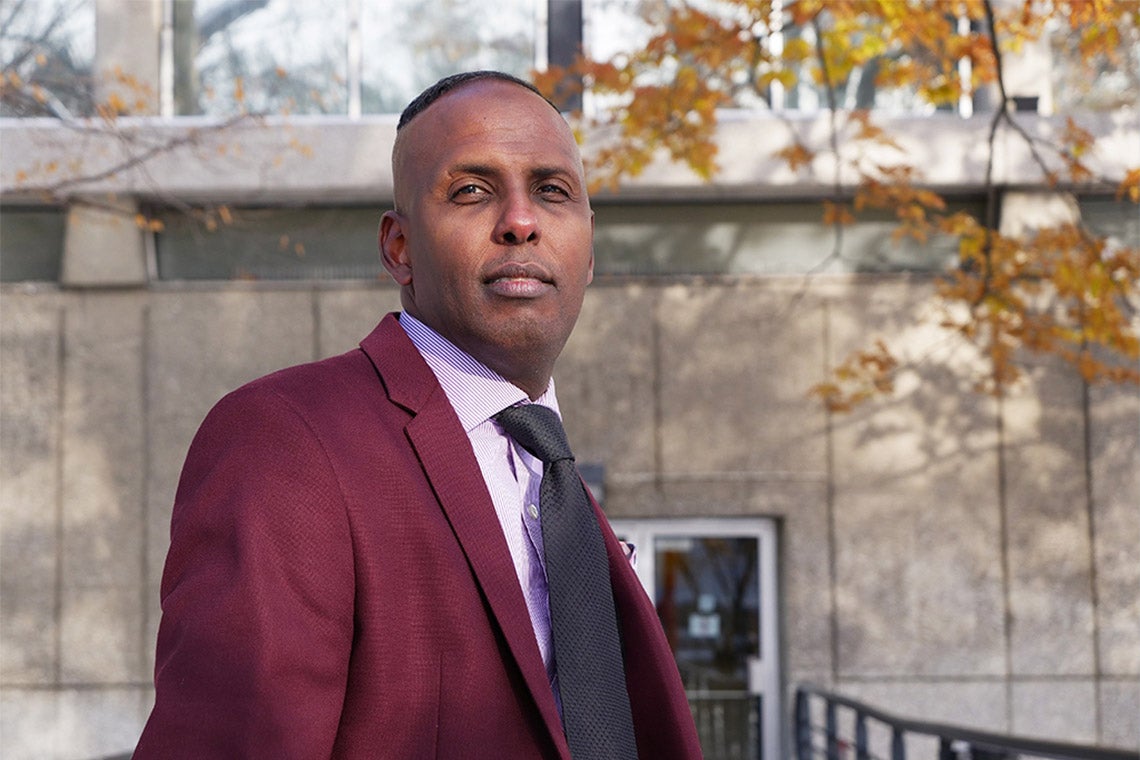 Ahmed Ali Ilmi is a member of the inaugural cohort of the Provost’s Postdoctoral Fellowship Program, which provides funding to increase opportunities for scholars from underrepresented groups (photo by Marianne Lau)

Reflecting on his post-secondary schooling, the experience that stands out most to Ahmed Ali Ilmi is always feeling like “the only Black male.”

“Where are all the Black men in higher education?” was a question the anti-racist educator and scholar found himself constantly asking. Over the next two years, Ilmi will tackle this question as the first Provost’s Postdoctoral Fellow at the University of Toronto’s Ontario Institute for Studies in Education (OISE).

The Provost’s Postdoctoral Fellowship Program is a recent U of T initiative that provides funding to increase opportunities for scholars from underrepresented groups – specifically Indigenous and Black researchers. Ilmi is in the first cohort of this three-year pilot program, which was introduced in 2018-19. The program, which will announce its second cohort in early 2020, helps resarchers like Ilmi grow their scholarly profiles, undertake academic work at U of T and strengthen the research environment at the university with diverse perspectives.

Ilmi, who earned his master’s and PhD degrees in social justice education at OISE, says he is thrilled to be one of seven researchers in the inaugural cohort.

“It’s unreal. It’s beyond my wildest academic dreams to get this much recognition and support from the University of Toronto,” he says.

His post-doctoral research explores how Black boys are being socialized in Canada’s K-12 classrooms by gathering and analyzing stories of their schooling experiences. Ilmi says that highlighting their voices is key to countering anti-Black racism and improving educational outcomes.

“In dominant Canadian society, there is a narrative that Black males are a ‘problem’ and this is reflected in the classroom. So, the question is: How do we shift this mindset to enable young Black Canadian males to realize their educational potential?” he says.

“We need to find the voices of Black males in education and account for the ways in which their early educational experiences are linked to their lack of opportunity. I hope to contribute to the changing of this narrative as a means of changing this trajectory.”

“We know a great deal about the challenges faced by Black youth, and the notion of articulating and illuminating some of the educational challenges they face in their junior years will make a huge contribution to scholarship – and, more importantly, to practice.”

This project builds on Ilmi’s graduate research which looked at social exclusion and identity formation among Canadian youth of Somali descent. The work, which drew heavily on his own experiences as a Somali Canadian, culminated into his 2013 book, The 'Say Walahi' Generation: Identity, Profiling and Survival in Canada.

Ilmi is working under the supervision of Professor Njoki Wane, who was also his graduate supervisor. Wane, who is chair of the department of social justice education, says Ilmi will contribute “tremendously” to Black studies at OISE.

“Ahmed is an inspiration in his research, teaching, and scholarly activism,” she says. “A creative and dynamic scholar who is well-grounded theoretically and practically, his commitment to strengthening Black identities in Canada despite national, ethnic or cultural background is to be commended.”