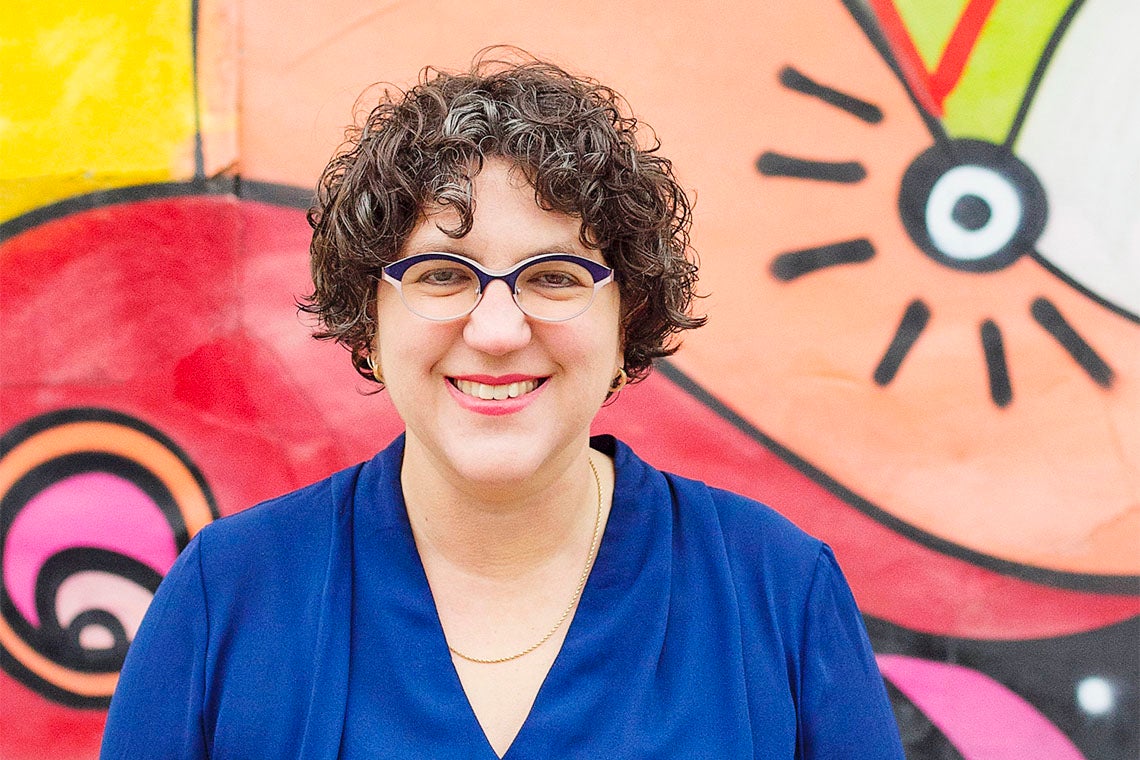 Kady Cowan, a U of T alumna, has overseen a number of sustainability initiatives in Canada and the U.S., and now leads the energy business partnerships team at Ontario's Independent Electricity System Operator (photo by Jennifer Blaauw Photography)

She was hiding them from the late Henry Kock, an avid eco-activist and naturalist who was best known for cultivating trees from seed in Canada. He lived a life practically free of waste and his home had no garbage cans – leading Cowan to become a trash smuggler.

“Meeting Henry was the best thing that ever happened to me,” says Cowan, who graduated from the University of Toronto with a bachelor of science (honours) degree in 2002. “He just lived his values. I stayed with him when I was 19 as part of a youth volunteer program. Meeting him made it obvious to me that I wanted to study the environment.”

Inspired by Kock’s devotion to sustainability, Cowan explored U of T’s programs and when she landed on geography, a light bulb went off.

“I thought, ‘This is exactly what I need to study – I need to study the earth!’ So, I double-majored in environmental science and physical geography and never looked back.”

Cowan, who was a member of New College, has since become an award-winning expert in energy conservation and sustainability –  a career that would have made Kock proud.

“I still rely on what I learned in my undergraduate degree,” she says. “Some of the concepts that I was introduced to around ecosystems, complexity, interactions and process are still things I use today in managing business and teams.”

After graduation, Cowan worked in the non-profit sector with a focus on pollution-prevention before setting her sights on “greening” the health-care sector.

Between 2007 and 2015, she co-ordinated the implementation of energy and environment programs at the University Health Network (UHN) and served as chair of the board of the Canadian Coalition for Green Health Care for six years. She’s helped Toronto-area hospitals significantly improve energy savings, reduce medical waste and eliminate use of mercury in temperature and pressure equipment.

Cowan then moved to the United States to work in sustainability leadership with Atrium Health, a large health-care system headquartered in North Carolina.

She led a project called Energy Connect, which used behaviour-based science to boost energy savings in six hospitals. It was so successful that the project model has since been applied to all 40 hospitals in the system and hundreds of medical office buildings across the state – the second-largest health system in the U.S. Cowan also received an Energy Innovator of the Year award in 2018 from the Association of Energy Engineers.

Cowan is now back in Toronto where she leads the energy business partnerships team at the Independent Electricity System Operator (IESO). Her job is to help large institutional and commercial customers like hospitals, universities, school boards, municipalities and big businesses across Ontario adopt and implement energy efficiency programs.

“I see myself as a change agent,” she says. “I bring the right people together, set up questions in the right way and leave a room with a plan forward. Being able to see how it might come together and then executing on that – that's the work.”

Regardless of the program or initiative, Cowan believes the key to creating changes that stick is not gathering “buy-in” but facilitating personal investment.

“We need people to come to their own conclusions – that this change will make things better, cheaper, faster, kinder, whatever makes them tick,” she says. “It's that process of inclusion and investment in the change that’s allowed me to get the most traction.”

For students thinking about their future careers, Cowan believes they should come to their own conclusions about their strengths and weaknesses.

“I don’t think we have enough encouragement to stop and look back on what we did well and what we could do better,” she says. “It's an improvement and learning mindset. If every student could get into this practice early in their career, we'd all be better off.”

She would also like to see students and professionals alike consider creating positive environmental change through empathy and kindness.

“I don't think that people believe in kindness as a solution as much as they should,” she says. “I think we're starting to see that where there is kindness and empathy, persistent, sticky and better solutions emerge.

“I'm a very hopeful person,” she adds. “I think to be an environmentalist you have to be optimistic. But hope is not a strategy. We need to give ourselves permission to learn and grow from our experiences.”