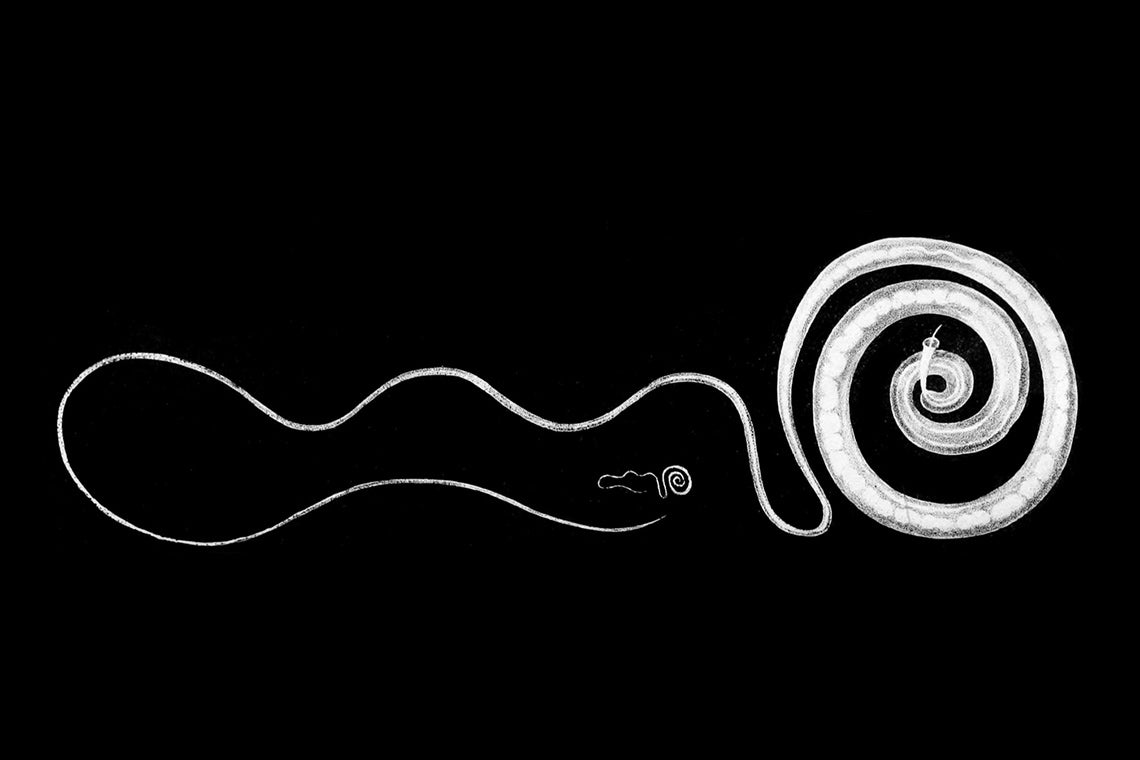 Andrew Fraser did not set out to study parasites, but when his team stumbled on an intriguing finding he could not look away.

Fraser’s team at the University of Toronto was testing a new method for unpicking how drugs affect the movement of a non-parasitic nematode, Caenorhabditis elegans (C. elegans), which is used as a stand-in for humans.

A chance finding prompted them to use this lab worm as a model for parasites instead. The resulting research could lead to the development of drugs that target intestinal nematode worms, which affect millions of people around the world.

“We serendipitously discovered a new way to kill these parasites without harming the human host,” says Fraser, a professor of molecular genetics at the Donnelly Centre for Cellular and Biomolecular Research.

“These parasites pose a major global health burden and, as their resistance to the available drugs continues to grow, so does the need to develop new therapies.”

Over one billion people, including 880 million children, are infected with intestinal nematode worms such as roundworms, hookworms and tapeworms, according to the World Health Organization. The potentially lethal infections – increasingly resistant to standard drug treatments – are especially common in the developing world due to a lack of clean water and sanitation.

The U of T research was led by three graduate students, Samantha Del Borrello, Margot Lautens and Kathleen Dolan in collaboration with Amy Caudy, who is an associate professor of molecular genetics in the Donnelly Centre.

Their findings are described in a study published online in eLife, an open-access journal.

The first drug the team tried was cyanide because its effects are well known and they wanted to make sure the new system works. Cyanide blocks respiration and, as expected, when added to the lab dish containing the worms, it quickly paralyzed them. But to the researchers’ surprise, the worms did not die. They resumed wriggling about as if nothing happened when the drug was washed out 24 hours later.

“Our worms were clearly doing something very different to everything we knew about respiration in other animals,” says Del Borrello.

It turned out that the cyanide made the worms switch to another, unusual form of metabolism that makes energy without oxygen. This type of anaerobic metabolism has been known to occur in parasitic worms, allowing them to survive for long periods in the airless confines of the gut. Instead of oxygen, these parasites rewire their metabolism to produce energy using a molecule called rhodoquinone, or RQ.

Crucially, humans do not make RQ. That makes it a perfect target for drug development because the drugs will selectively kill the parasites without touching their human host.

Having tricked the lab worm into making energy like a parasite, the team could now apply all the genetic and molecular tools that have been developed for C. elegans to begin to work out how RQ is made. This has remained an outstanding question in a field that has seen little progress since RQ was first discovered 50 years ago in parasitic worms.

But first, they needed oysters. Oysters, and other coastal mollusks, are among the few organisms beside the nematodes that produce RQ – probably as an adaptation to changing oxygen levels brought about by tides. Because RQ is not commercially available, Dolan had to extract it from oysters she bought at the store and use it to optimize the mass spectrometry instrument that was later used to detect RQ in worms.

Then began the hunt for the genes responsible. The team tested about 80 different mutant worm strains before finding one unable to make the molecule – and thus unable to survive in cyanide – indicating that the mutated gene is required for RQ biosynthesis. The gene, called kynu-1 (pronounced as ‘kai-noo 1’) turned out to code for an enzyme that carries out an early step in RQ synthesis. This finding upended widely accepted ideas about how RQ is made. Most importantly, it also showed the team a way to attempt to block RQ synthesis with drugs.

Del Borello is now testing thousands of compounds to find candidates that kill C.elegans when it’s using RQ, and which could be developed into new drugs against parasites.

“It’s great that we figured out the science behind it, but what I am most excited about is finding drugs that target the RQ-dependent metabolism,” she says.

“We haven’t reached the tipping point quite yet in terms of drug resistance, but we also don’t have anything in the pipeline to help out when we do.”

They already have several promising candidates, which will next be tested on animals before moving on to human trials.

Even if it were only possible to develop a drug for livestock, it would help save agricultural industry billions by eliminating nematode infections in farm animals.

From testing new equipment to solving parasite metabolism, the way the project turned out took everyone by surprise.

“This was not at all what we expected when we started out,” says Lautens, who credits a team effort for their success.

“That we’ve been able to contribute to a field that has not seen much progress in many years is a testament to how hard everyone’s been working on it with a lot of different perspectives.”

The research was supported by funding from the Canadian Institutes of Health Research.