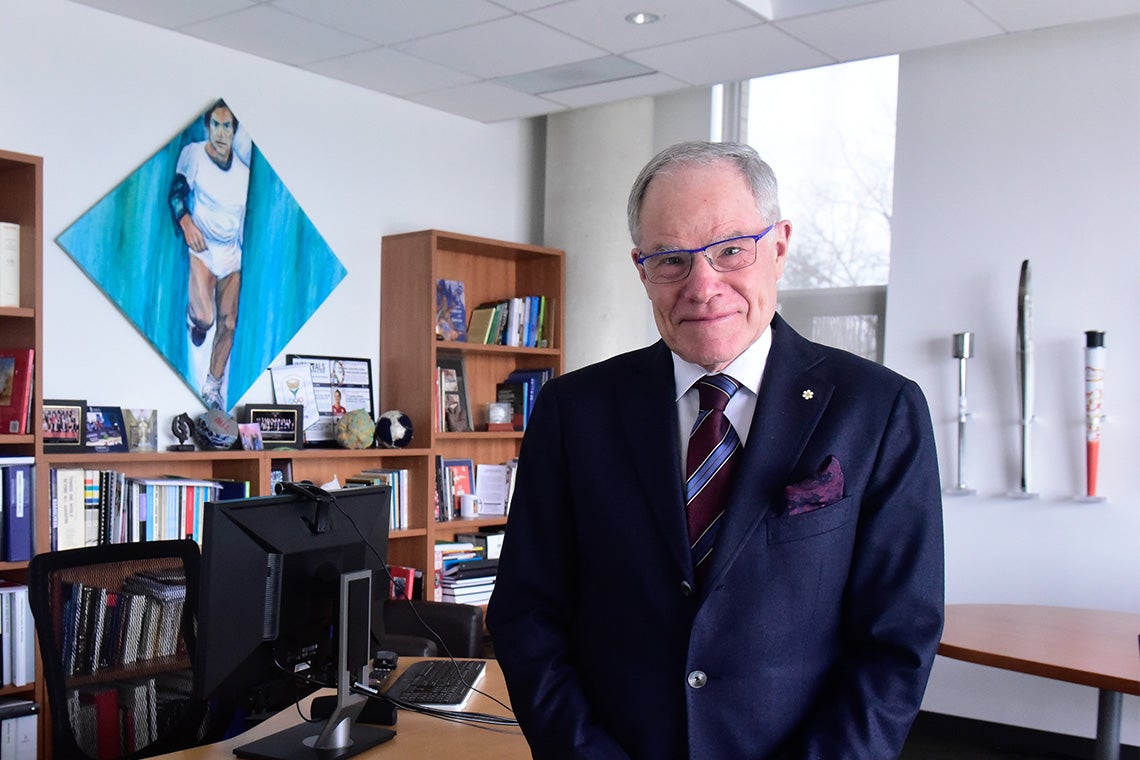 (Photo courtesy of U of T Scarborough)

Sport and public policy expert Bruce Kidd – a champion of fairness and equity ever since his days as an Olympic runner – has been named the University of Toronto’s next ombudsperson.

A professor in the Faculty of Kinesiology & Physical Education and former vice-president and principal of U of T Scarborough, Kidd was appointed to the position for a three-year term, beginning July 1.

He says it’s a job he has essentially been training for all his life.

“I learned through my early years in track and field to become an ally,” he said.

Operating independently of university administration and accountable to the Governing Council, U of T’s Office of the Ombudsperson was first established in 1975 and helps students, staff, faculty and alumni deal with university-related issues and complaints when other avenues have been exhausted. The office also alerts Governing Council and university leadership of broader systemic issues that need attention.

Matters brought to the ombudsperson are kept strictly confidential unless complainants agree otherwise.

U of T’s Governing Council approved Kidd’s appointment at its meeting on May 13.

Claire Kennedy, chair of the university’s Governing Council and chair of the Committee to Review the Office of the University Ombudsperson, noted that the committee had determined that Kidd, with his extensive knowledge of the university and his years of leadership experience, was exceptionally well-suited for the position.

“He embodies the values of the university and has a well-earned reputation for being principled and fair,” Kennedy said.

“In his many roles, Professor Kidd has continuously demonstrated a student-centric commitment for success built on fairness and empathy.”

Kidd will succeed Professor Emeritus Ellen Hodnett in the role. Hodnett, who has served as ombudsperson since 2015, taught in the Lawrence S. Bloomberg Faculty of Nursing for 39 years and became the first nursing research chair in Canada in 1996.

“Professor Hodnett has brought a wealth of knowledge, experience and insight to her role as University Ombudsperson,” Kennedy said. “Her legacy will have a lasting impact on the fabric of the institution.”

As for Kidd, he has devoted much of his career to sport, equity and leadership.

While still in high school, he ran with the East York Track Club under the guidance of Fred Foot, who was also a U of T track coach.

He said he soon learned, with the help of his fellow teammates, that sport was often not a level playing field. Whereas his male teammates changed in a locker room with showers, he said female runners were left to change in their cars or behind a tree.

Kidd added that his education continued as a member of Team Canada when Harry Jerome, an Olympic teammate at the 1964 Olympic Games in Tokyo and bronze medalist in the 100-metres showed him how racism existed even at sport’s highest levels.

“When I was rebellious and caused trouble or spoke out, people would say, ‘That’s just Bruce being Bruce,’” Kidd recalled. “But when Harry did that, they would call him a quitter, out-of-line and worse – all kinds of terrible things.”

Kidd retired from running after Tokyo but continued to use his status as a well-known Canadian athlete to condemn racism, sexism and homophobia in sport. He sought to persuade athletes and organizations not to engage with apartheid South Africa. In a 1968 television interview alongside Jerome, Kidd said segregation had no place in sport. He later became the Canadian director of the international campaign against apartheid in sport.

Kidd began teaching at the university in 1970 after earning degrees at U of T, the University of Chicago and York University. As the founding dean of the Faculty of Kinesiology & Physical Education from 1998 to 2010, he oversaw construction of the Varsity Centre, with a 5,000-seat stadium, a track and artificial playing field. He introduced staff training on homophobia in sport and prioritized gender equity.

He also served as warden of Hart House from 2011 to 2015 and became the 10th vice-president and principal of U of T Scarborough in 2014. In his four years as principal, he was known for his approachability, regularly inviting students and faculty on walks around campus.

“There was method to my madness,” he said. “I would take advantage of my walks to knock on doors and talk to people. I’m an old-fashioned communicator.”

Kidd serves on the board of the Toronto Pan Am Sports Centre, where diving and swimming events were staged during the 2015 Pan American Games and Parapan American Games. Now co-owned by the City of Toronto and U of T, the state-of-the-art complex includes a 35,000 square foot field house and 10-lane pool designed to international standards.

At a farewell reception for Kidd’s retirement, former student union leader Sitharsana Srithas was among those who praised Kidd’s advocacy.

“Your commitment to equity and inclusion has always been something that inspired me and several other student leaders,” she said.

Kidd has earned many awards and accolades over the years. That includes being appointed to the Order of Canada in 2004 in part for his work in “eradicating sexism and racism in sporting communities around the world” and being made a member of the Canadian Olympic Hall of Fame not once – but twice (as an athlete and as a builder). He’s written several books on the history and political economy of sports, with a memoir called A Runner’s Journey to be published this fall.

His plans for his first days in the office of ombudsperson include implementing the recommendations of the Report of the Review Committee, including reaching out to multiple stakeholders withing the university community including student government leaders and academic leaders.

“The to-do list is defined by who comes in the door,” he said.

Although he has gotten to know each of U of T’s three campuses intimately over a lifetime of involvement with the university, Kidd said he expects to encounter new challenges in his next role.

“I know there will always be things I have to learn and I’m looking forward to learning things on the job,” he said. “But I feel I'm well-prepared.”