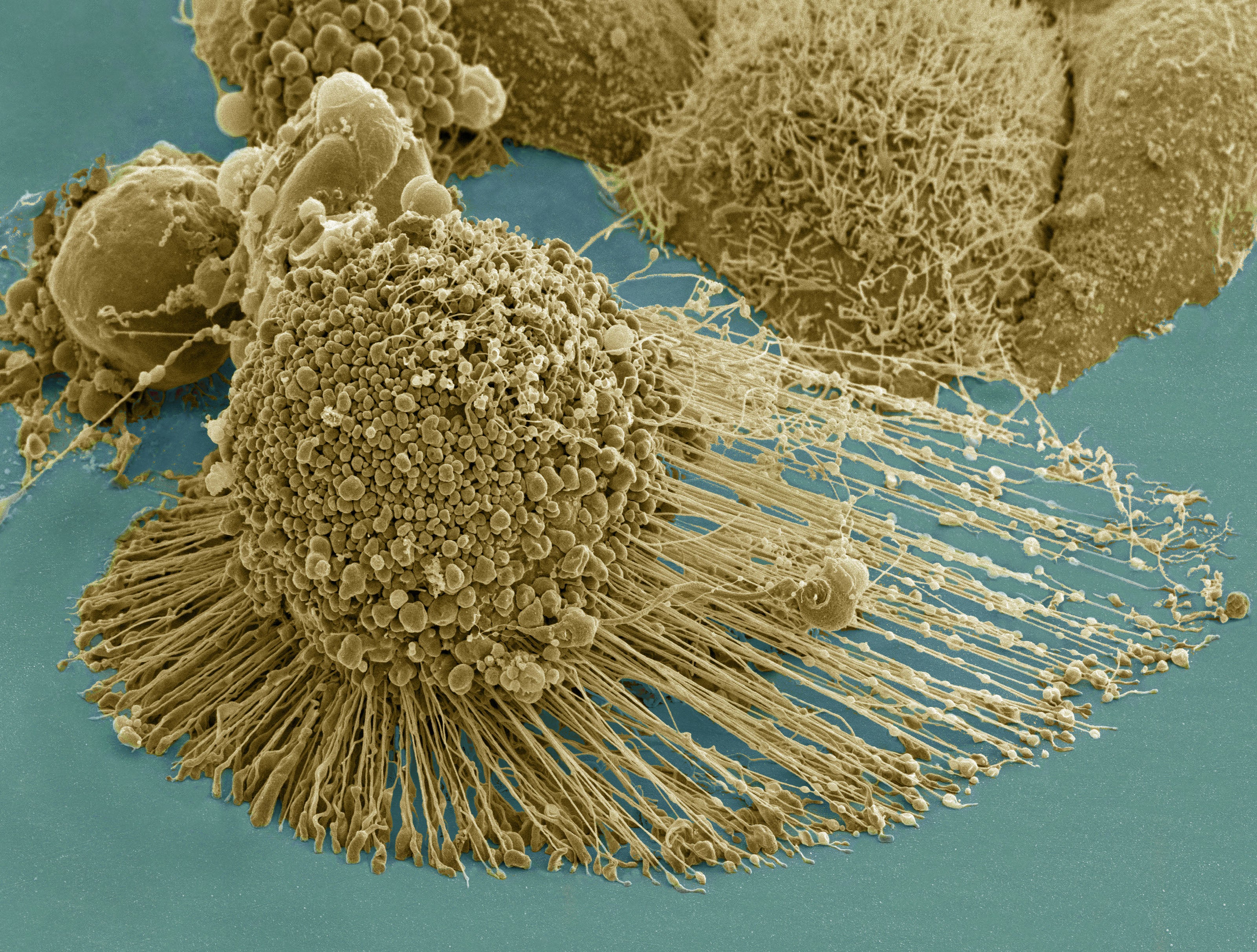 Scanning electron micrograph of an apoptotic HeLa cell using a Zeiss Merlin HR-SEM. The images were created at the National Center for Microscopy and Imaging Research (photo by Tom Deerinck/NIH)

Cancer can adapt its metabolism in a way that could overcome lipid-focused therapies being developed by drug companies, a University of Toronto study has found.

“Several clinical trials have failed because metabolism is such an adaptive process by which cancer cells gain drug resistance,” says Michael Aregger, a co-lead author and research associate who is working with Jason Moffat, a professor of molecular genetics in the Donnelly Centre for Cellular and Biomolecular Research.

“[But] if you know how cells are able to adapt to perturbations, maybe we can target them more specifically to avoid resistance from developing.”

In addition to Moffat, the research was also led by Brenda Andrews and Charles Boone, University Professor and professor of molecular genetics at the Donnelly Centre, respectively, and Chad Myers, a professor of computer science at the University of Minnesota Twin Cities.

The study, published recently in the journal Nature Metabolism, is the first to investigate changes in cancerous cells as they adapt to a shortfall of critical nutrients such as fat molecules, or lipids, which make up the cell’s outer envelope.

When cancer cells are unable to make their own lipids, they gobble them up from their environment to ensure a steady supply of these essential building blocks, the study found. Lipids also serve as fuel and chemical signals for communication between cells, among other roles.

The switch in metabolism could be bad news for drugmakers seeking to target cancer by reducing its lipid reserves. In particular, drugs that inhibit an enzyme called FASN, for fatty acid synthase, involved in an early step of lipid synthesis, are being explored in patient trials. Fatty acids are precursors of larger lipid molecules and their production is increased in many cancers thanks to elevated FASN levels, which are also associated with poor patient prognosis.

The U of T study suggests that the effectiveness of FASN inhibitors could be short-lived owing to cancer’s ability to find another way to procure lipids.

“Because FASN is upregulated in many cancers, fatty acid synthesis is one of the most promising metabolic pathways to target,” says Keith Lawson, a co-lead author and PhD student in Moffat’s lab who is enrolled in the Surgeon-Scientist Program at the Faculty of Medicine. “Given that we know there is a lot of plasticity in metabolic processes, we wanted to identify and predict ways in which cancer cells can potentially overcome the inhibition of lipid synthesis.”

To block fatty acid synthesis, the researchers employed a human cell line from which the FASN coding gene was removed. Using the genome editing tool CRISPR, they deleted from these cells all 18,000 or so human genes, one by one, to find those that can compensate for the halt in lipid production. Such functional relationships are also referred to as “genetic interactions.”

Data analysis, performed by Maximilian Billmann, a co-lead author and a postdoctoral fellow in Myers’ lab at Minnesota-Twin Cities, revealed hundreds of genes that become essential when cells are starved of fat. Their protein products clustered into well-known metabolic pathways through which cells vacuum up dietary cholesterol and other lipids from their surroundings.

Cells’ intake of cholesterol has become textbook knowledge since it was discovered half a century ago, winning a Nobel Prize and inspiring the blockbuster class of drugs, statins, as well as many others. But the new study found that one component of this process remained overlooked all this time. The gene encoding was known as C12orf49, named after its location on chromosome 12. But the researchers re-named the gene LUR1, for lipid uptake regulator 1, and showed that it helps switch on a set of genes directly involved in lipid import.

“This was a big surprise to us that we were able to identify a new component of the process we thought we knew everything about,” says Aregger. “It really highlights the power of our global genetic interaction approach that allowed us to identify a new player in lipid uptake in a completely unbiased way.”

By coincidence, two groups working independently in New York and Amsterdam also linked C12orf49 to lipid metabolism, lending further support to the U of T researchers’ findings. The New York team published their findings in the same journal issue as Moffat and colleagues.

Inhibiting LUR1, or other components of lipid import, along with FASN could lead to more effective cancer treatments. Such combination therapies are thought to be less susceptible to emerging drug resistance because the cells would have to simultaneously overcome two obstacles – blocked lipid production and import – which has a lower probability of occurring.

“Therapeutic context that comes out of our work is that you should be targeting lipid uptake in addition to targeting lipid synthesis, and our work highlights some specific genes that could be candidates,” says Lawson.