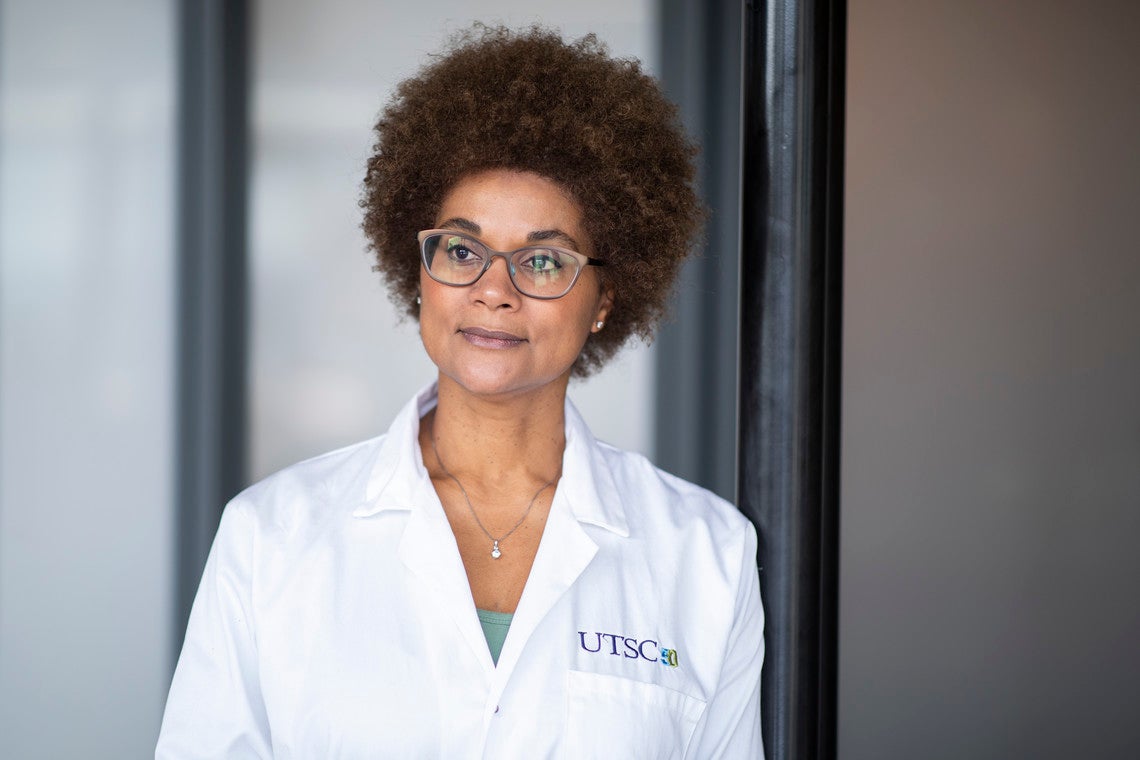 Professor Maydianne Andrade is the vice-dean faculty affairs, equity and success, at U of T Scarborough and the host of The New Normal podcast (photo by Nick Iwanyshyn)

A string of violent police acts against unarmed Black men and women, with the Aug. 23 shooting of Jacob Blake among the most recent high-profile incidents, has prompted a racial reckoning in the United States and around the world.

Coming just three months after the killing of George Floyd, the Blake incident led to a fresh wave of protests and boycotts. It also prompted renewed conversations around anti-Black racism in the U.S. and beyond.

Among those leading these conversations at the University of Toronto is Professor Maydianne Andrade, vice-dean faculty affairs, equity and success, at U of T Scarborough and a Canada Research Chair in Integrative Behavioural Ecology.

In April, Andrade launched a new podcast, The New Normal, with the aim of exploring how the COVID-19 pandemic was affecting our lives. But in the wake of Floyd’s death, the podcast shifted to tackle anti-Black racism, equity and social justice in a special two-part episode, drawing on scholarly perspectives and personal experiences from Andrade and other U of T scholars.

U of T News recently caught up with Andrade to get her thoughts on the latest developments south of the border, systemic racism in Canada and her reflections on addressing anti-Black racism in The New Normal.

Your New Normal podcast took on a different note with your two-part series about anti-Black racism in the wake of the George Floyd killing. Why did you feel it was important to have that discussion?

Throughout the pandemic, it has been clear that people were being made aware of inequities that were not previously visible to them. For some of us, this was not news – we have always noticed that people in lower-paying, often precarious work are not a random subset of the population in Canada. We have always known, and been deeply affected by, the realities behind well-known statistics about differential surveillance and violent encounters between police and Black and Indigenous Canadians in particular. We have experienced fear and sadness and anger about these issues for quite a long time. And we have sought ways to inform others about these realities – often with very little traction except among the communities that are at a disadvantage.

I felt we had to address this in my podcast for two reasons. The first reason was very personal. I could not think about anything else. That is still the case. I am still struggling to maintain some measure of “new normal” while the ongoing violence, racism and divisiveness continues. Many of my Black colleagues feel the same way. It would have been an unsustainable fiction to have episodes about anything else. Lisa Lightbourn, who produces the podcast, reinforced my feelings on this – that people who were not Black were also struggling.

The second reason was that I felt an obligation to those who have started to listen to The New Normal. I knew many of them would be struggling to understand, and would value the space to think about these extremely challenging issues. I saw from the protests that, unlike in the past, people were engaged across racial and socio-economic lines for the first time that I can remember. It was for these listeners that I felt I needed to share not just the facts, but the personal experiences that would allow people to connect with the lived reality of being a Black person in Canada. I am grateful that my guests were willing to share their experiences as well.

As someone who has been involved in equity work for many years, did the conversations about racism and racial injustice in The New Normal result in any new insights for you personally?

As a scientist, I tend to focus on broad explanatory hypotheses and data. The facts. But years in equity work, and the reaction to Enough [the first instalment of the two-part The New Normal episode on anti-Black racism] in particular, made it clear to me that statistics are too sterile in and of themselves to motivate change. It is the personal connections that reach people in a way they cannot ignore. Many colleagues have told me that they wept at the stories they heard: having to explain to a tall 12-year old that the police may hurt them; being stopped and casually humiliated while cycling to work. This is what really reached people.

There have been so many incidents of violent anti-Black racism that it sometimes feels like they blur together.  What’s your take on the Jacob Blake incident in particular?

What we need to do is allow ourselves to feel the intensity of each episode, but then ensure we keep in mind that this is just one in a litany. What is needed is a broad change, not a detailed understanding of each case. We will not always know the specific circumstances of each, and it is far too easy to begin to make excuses about the “specifics” of each case. For example, things I have heard, not necessarily about Jacob Blake, but about others:

The Jacob Blake shooting led to a new wave of protests and boycotts of major sporting events, as well as statements in support of the Black Lives Matter from brands and organizations. What do you make of these gestures and their potential impact?

I am encouraged by widespread action – particularly from those who have never previously shown support. That support may have been there previously, but silent. Silence does not produce a political will for change.

But we need the support to be more than performative. We are literally dying. And in fear. And at risk. We need to see it affect how people vote. We need to see people support initiatives at work, in schools and in their communities that lead to more equitable lives. I will hold my judgement on what this all means until then.

I remember when I first became a vice-dean and was discussing the U of T’s TRC [Truth and Reconciliation Commission] response initiatives with a student who was an Indigenous activist. She told me that when she described to her mother how the current context was full of potential and change, her mother said, “Well, I hope this time it is different.” One cannot help but temper optimism with realism. “I hope” is a constant companion. In my podcast, I am trying to edit “I hope” out of my language and replace it with something more intentional and deliberate. We must work together to go past hope to action. This is why after Enough we did A Crossroad, which really continues our collective story. Which path will we choose?

As my colleague Onye Nnorom pointed out in Enough, there is no shortage of white papers, reports and proposals on solutions. What is in short supply is the political will and resourcing necessary to actually put them into effect. So, creating solutions is not necessarily where I see the role of the academy. Instead, I look to our role in educating those who will determine whether there is a political will for change.

Just this morning, I read an article on the U.S. institutions that are starting to gaze inwards at their own programs for educating police. What are they teaching? What are they not teaching? How are their students able to move into a structure in which there is systematic devaluing of human lives that are clothed in a particular skin? How have they failed those students, and society if this is the case?

Again, I think of the TRC and the U of T’s response, in which there is an acknowledgement of the culpability of universities in educating those who created the residential school system, and who wrote the racist, twisted laws for stealing land and rights from Indigenous peoples. It is about more than being architects of solutions. It is most transparently this: We must acknowledge that we are culpable if our graduates do not understand that all human lives should be valued and protected, that all should have the opportunity, freedom and resources to thrive, and that we currently live in a society in which this is not the case.

Is there anything else you would like to add about where we currently stand in this conversation?

This is a Canadian problem, too. It is tempting for us to look south and shudder while reaching for comfort in the thought that “things are different here.” But during all of this, we need to remember some facts: We already know in Canada that carding, or surveillance, of Black and Indigenous Canadians occurs at a much higher rate than white Canadians or other Canadians of colour, and this is true across the country. A new report on race and policing in Ontario was released by the Ontario Human Rights Commission just last month. U of T’s Scot Wortley and colleagues have documented the disproportionate rate of injury and death suffered by Black Canadians in Ontario. They have shown that this pattern has been consistent over years. And, in a particularly chilling causal arc, they also show that many of these devastating encounters start with proactive policing of people with no previous criminal record, and for whom there is no specific suspicion of wrongdoing. This is not just an American problem.

The New Normal is created in collaboration with a University of Toronto Communications team led by Lightbourn. You can listen to the podcast on Spotify or listen on SoundCloud. You can also find it on Apple or listen on Google.