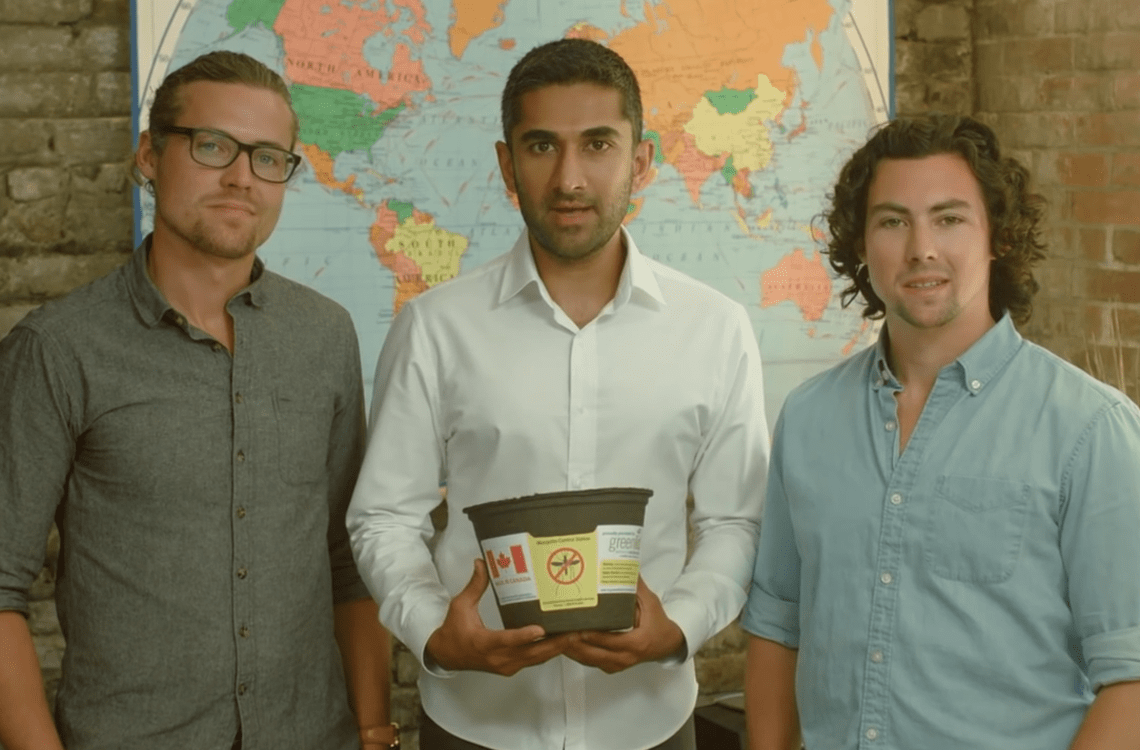 Left to right: Greenlid founders Morgan Wyatt, Adil Qawi and Jackson Wyatt with one of the biotraps they'll be donating to the Canadian Olympic Foundation (Image screengrab from YouTube)

With the 2016 Summer Olympics in Rio de Janeiro only weeks away, many athletes – including Canadian tennis star Milos Raonic – have pulled out of the Games, citing fears of contracting the mosquito-borne Zika virus.

But U of T graduates Morgan and Jackson Wyatt, two brothers from Brockville, Ontario, are doing their best to protect the Canadian athletes, coaches and officials who do fly down to Rio. The Wyatts are founders of Greenlid Envirosciences, a Toronto-based company that is enjoying great success with its fully compostable Greenlid compost bin. The Wyatts have developed the Biotrap – a biodegradable mosquito trap based on the Greenlid – and are donating hundreds of the traps to the Canadian Olympic Foundation for use in Rio. U of T News spoke to Morgan Wyatt about the mosquito trap.

Your Biotrap is generating a lot of publicity, with stories in the Globe and Mail and Metro News, among other media outlets. But it’s based on your existing product, the Greenlid. How did the Greenlid come about?

The idea first came when my brother Jackson and I were having to deal with compost and food waste in the kitchen. It was always a mess and the compostable bags always seemed to leak, and so we just thought there could be a better way. I had a PhD in chemical biology (from McMaster University). So I started to look at different ways we could maybe make a fully compostable container that didn’t leak.

We’ve been concerned about the environment for a long time – even in high school – and we just thought we had something that could actually make it easier for people to make those eco-friendly choices.

You introduced the Greenlid a few years ago. Has it been a success?

It’s been very successful. We have a tremendous customer base across Canada. We’re in about 2500 stores across the country. We found a local manufacturer in Ontario that was able to produce the bin. Ontario has a great recycling program so we actually use a lot of end-of-life recycled cardboard that’s collected around Ontario and we repurpose that into the Greenlids.

What’s your U of T connection?

We both have our undergraduate degrees from U of T – I have a  BSc in pharmaceutical chemistry while Jackson has a BSc in physiology. We also took the Greenlid through the Rotman School of Management’s Creative Destruction Lab last year, so we were back at U of T quite a bit for that program.

What inspired the mosquito biotraps?

It was developed from the same technology that makes our compost bins leak-proof. We were looking for different applications that we could use this with, and one came up when the Queensland Health Authority in Australia contacted me looking for a biodegradable container to use for their mosquito traps that they set out to combat dengue fever. I worked with them for about 18 months to modify our current formulation so that we could get something that would last in tropical conditions and the conditions that are around a lot of mosquitos.

How do they work?

The biotraps mimic the breeding ground of mosquitos and are coated with insecticide so they target only the female mosquito. You just add water and they’re effective for four to six weeks. We can see a pretty significant reduction in the mosquito population as a whole when you put out enough of these traps in an area. Mosquitos only travel a few hundred metres in their lifetime, so if you put out enough traps you’ll actually decimate the mosquito population in your area. So they’re good for around your cottage or your home.

How effective are they?

Over 1,000 Biotraps were deployed in Queensland and shown to last for six weeks in both wet and dry conditions on a variety of surfaces (concrete, mulch, and dirt). During this time, the kill rate was established as greater than 95 percent within 5 minutes of making contact with Biotraps.

You’re donating Biotraps to the Canadian Olympic Foundation for the Rio Olympics. Did you approach them or did they come to you?

The Zika crisis began about two or three weeks after we began to ship the biotraps to Australia to help them combat dengue fever. One of the big questions was what are the athletes going to do down in Brazil, so we contacted the Canadian Olympic officials. My brother and I, along with our business partner Adil Qawi, will fly to Rio de Janeiro with several hundred traps. Some will be put around the actual Olympic facilities in Rio and some will be put out in trials in Brazil in smaller communities, because the government and the health authorities there are interested in purchasing them.

Obviously, you’ll be cheering for the Canadian team. But what if other teams approach you asking for Biotraps?

We’re focussing mostly on the Canadian team right now, but if other countries are interested in having them around, we can actually facilitate that, since we are bringing extras traps down with us!

Right now we’re probably going to be optimizing the Biotrap and working on a larger family format for our compost bin.

We hope to donate and deploy at least 100,000 Biotraps in 2016. And for every Biotrap someone buys, we will donate one trap to communities that are affected by mosquito-borne illnesses. You can learn more at our crowdfunding campaign at https://www.igg.me/at/biotraps.

Interested in startups?  Visit U of T's Banting & Best Centre for Innovation & Entrepreneurship