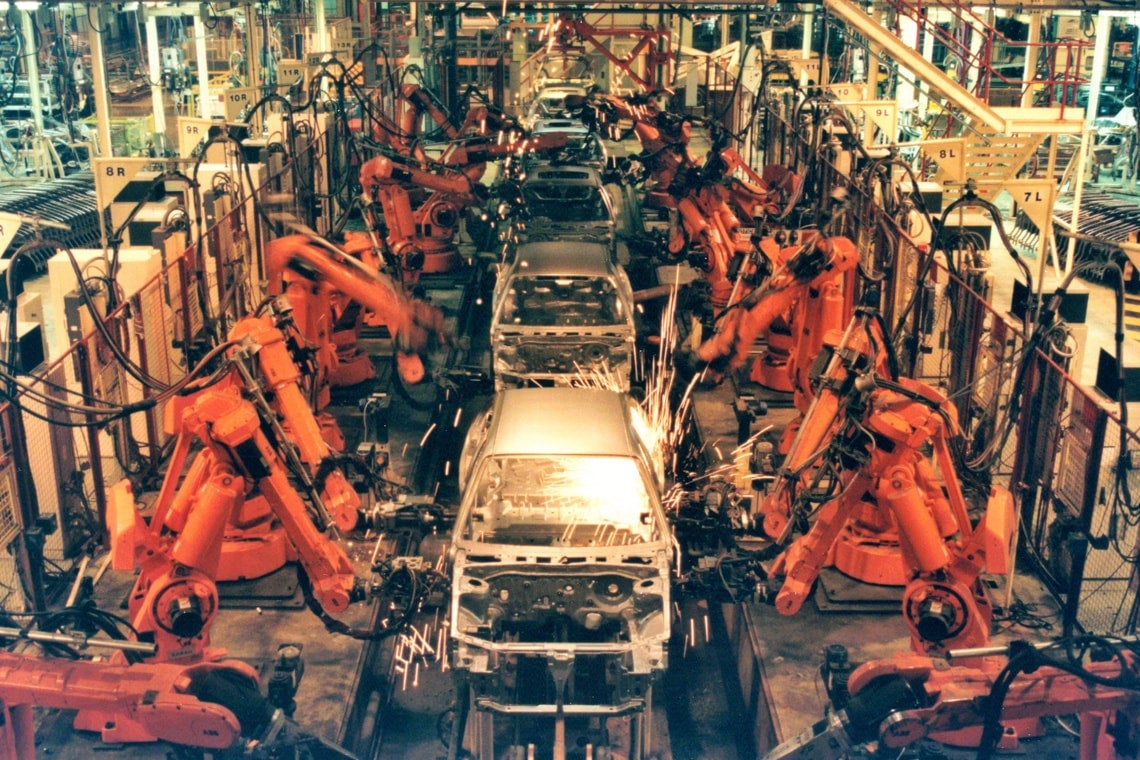 Robots building cars in a car factory. Being proactive can help Canadians prepare and adapt as the advent of artificial intelligence, information technology and robotics eliminate jobs, says David Ticoll (photo by spencer cooper via Flickr)

“If we do things right we will adapt faster than anyone”

The economic impact of an automated workforce will be much bigger than many observers expect, says Dave Ticoll, of the Innovation Policy Lab at the University of Toronto’s Munk School of Global Affairs.

But Canada is uniquely placed to manage structural change, says Ticoll, who recently wrote an article detailing his views on labour obsolescence for Policy Options.

“If we do things right we will adapt faster than anyone.”

With the advent of artificial intelligence, information technology and robotics, we’re experiencing a significant shift in today’s economy, says the entrepreneur. And although experts have talked about labour substitution, where machines take over human work, little is said about labour obsolescence, Ticoll says. This is when technology change produces a new business model that no longer needs or supports some jobs. The work associated with these jobs doesn’t get automated – it simply becomes unnecessary.

The changing car industry is a good example, he says. Ticoll expects many people to forego car ownership in favour of on-demand, automated transportation services. Reduced car sales mean less need for car dealers and insurance brokers. Their jobs won’t get automated, Ticoll says – they will simply go away.

The shift is occurring in many industries, he says. As more consumers bypass malls in favour of online buying, for instance, retail clerks are replaced by technology. However, the demand decreases for shopping mall employees like maintenance personnel and facility planners.

“Traditional jobs automation research focuses on one question: can a computer do this work?” Ticoll says. “But to forecast labour obsolescence we must assess both technology and business innovation as they play out in a specific sector.”

For the auto industry, Ticoll predicts, connected and automated vehicles will be the norm by the 2030s. According to his analysis, this change will affect jobs that currently employ 1.1 million Canadians. Of these, up to half (like truck drivers) will face direct competition from automation, while the remainder are at risk of functional obsolescence.

Many other industries will be affected by such technology and business model shifts.

“We need to change the way we operate for the 21st century economy,” he says. “For example, more people need STEM skills – science, technology, engineering, mathematics.”

Increasingly, he says, governments at all levels are taking action on this front.

Ticoll cautions that fostering STEM skills won’t be enough. Income inequality and precarious jobs are on the rise and Canada must ensure that those affected aren’t left behind. Possible solutions range from the adoption of a universal basic income, which the Ontario government is slated to pilot, to a proposal from Bill Gates to tax robots.

Despite labour challenges, Ticoll believes that Canada is uniquely placed to succeed in navigating structural change.

“Canada is a relatively small country compared with the United States, China or Europe. Our labour force is only about 18 million people. So we could potentially achieve a higher density of people with technological skills. It’s easier to train and keep occupied 18 million people than 10 or 20 times that number. If we do things right we will adapt faster than anyone.”