Canada’s pandemic ‘slow burn’ is best possible scenario under the circumstances: U of T health experts 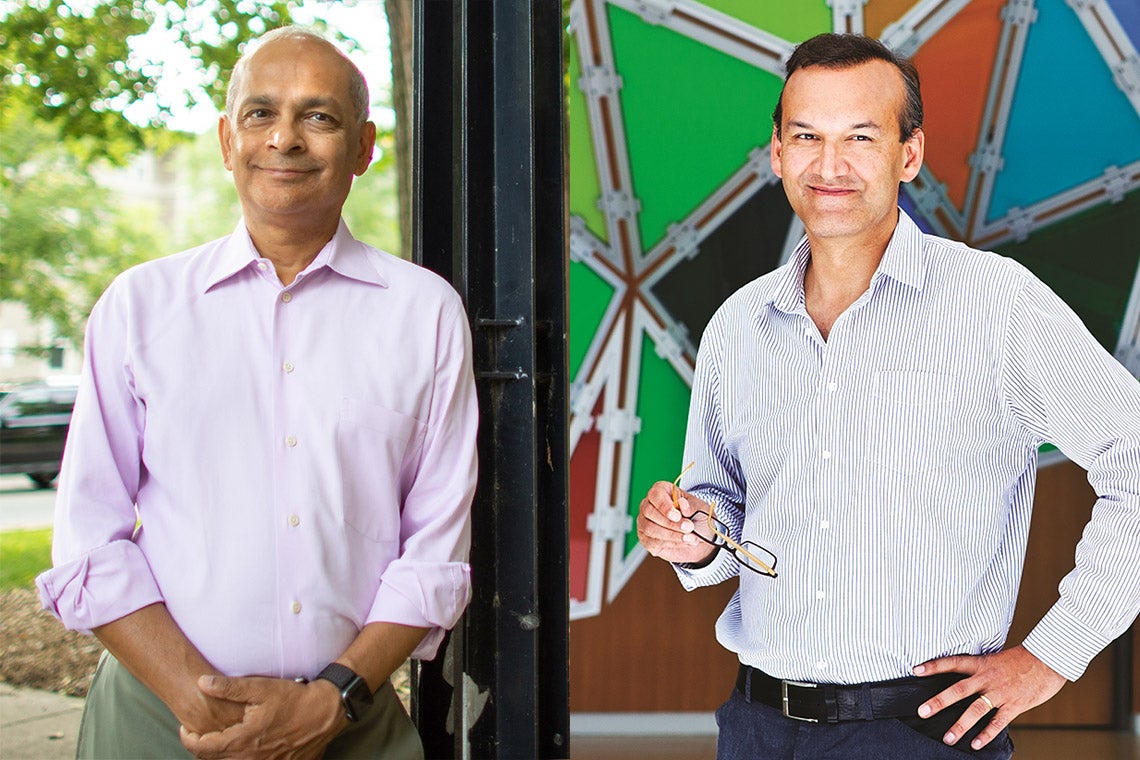 Both professors at the Dalla Lana School of Public Health, Vivek Goel is chair of U of T’s response and adaptation committee while Prabhat Jha is director of the Centre for Global Health Research (photos by Nick Iwanyshyn and Margaret Mulligan)

Canada is currently in a “slow burn” phase of the pandemic – a scenario University of Toronto public health experts say is probably the best we can hope for under the current circumstances.

“What we’re seeing are sporadic cases and occasional outbreaks, but we’re not getting to the point where our health-care system is overwhelmed,” says Vivek Goel, professor in the Dalla Lana School of Public Health and chair of the university’s response and adaptation committee.

Goel, who is also acting as a special adviser to U of T’s president and provost, says there are three possible scenarios public health officials are planning for in the near future.

The most likely scenario – and the one that Canada seems to be experiencing – is referred to as a “slow burn,” where the number of new cases resembles a steady wave over time.

The other scenarios include an early peak, which already happened in March and April, followed by a second major peak that coincides with the upcoming fall flu season. Goel says the concern with this scenario is that it could pose another threat to our health-care system. Another consists of a series of peaks and valleys, where the number of new cases dip and then spike to levels high enough where it starts to threaten the health-care system. He says there’s evidence this is happening now in many areas of the U.S.

“What we see with this current pattern of new cases is that they are sporadic – not clusters that are multiplying,” says Prabhat Jha, a professor at U of T’s Dalla Lana School of Public Health and director of the Centre for Global Health Research.

He adds that when community transmission rates are low it means the risk of getting infected while riding the TTC, for example, is also quite low because so few people in the community are actively infected.

“When we talk about further re-opening the economy and schools, this is an important condition,” Jha says. “That being said, we want to prevent clusters of infection. During this slow burn phase sporadic cases will happen, some community transmission will happen, but how we manage these small outbreaks will be key.”

When compared to countries around the world, Canada is faring well in terms of managing COVID-19 transmission. Goel points to data from the European Centre for Disease Prevention and Control that tracks new cases over a two-week period. It shows Canada is among the countries with the lowest rates of transmission.

The Harvard Global Health Institute has also developed a simple framework for thinking about COVID transmission risk. It includes four levels that are colour coded (green, yellow, orange and red) and range from least to greatest risk. Many parts of Canada are green, the lowest category of risk with fewer than one case per 100,000 population. By comparison, many areas of the United States are red, or greater than 25 cases per 100,000.

“It's very clear from the data that the distribution of COVID-19 cases have diverged greatly between our two countries,” says Goel, a renowned public health expert.

“Our response to the pandemic has been very different, and when we see these images of outbreaks in the U.S., it’s in a context of a much higher community transmission rate there.”

Goel says transmission rates in the U.S. have been dogged by a series of challenges, including the botched roll out of tests early on, states not implementing lockdowns early enough, states opening too soon and insufficient planning after re-opening occurs.

Jha, meanwhile, says Canadians may have a distorted view of COVID-19 because of our proximity to the U.S. and the way the pandemic has sometimes been covered by the media. He urges a “common sense” approach that involves accessing reliable information, being critical of sensationalized stories and following the advice of public health experts.

Yet, just because Canada is currently experiencing a low community transmission risk, both Goel and Jha agree that we can’t afford to be complacent since eliminating the virus likely won’t be possible until a global vaccine campaign is completed.

“We still need to maintain vigilance and continue taking precautions,” Goel says. “This means staying at home if we have symptoms, practising hand hygiene, adequate respiratory protection and wearing a mask when required.

“We also need to continue to monitor for new cases and outbreaks and manage them quickly.”