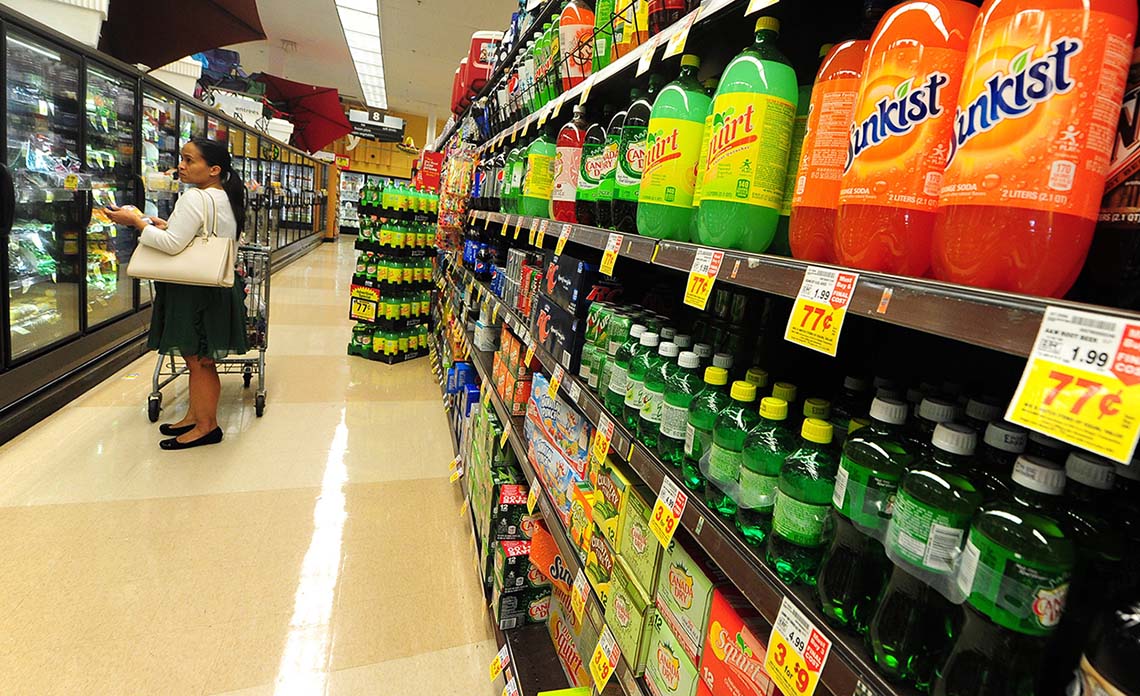 “Most of the evidence indicates that sugary drinks are the biggest contributors to sugar consumption and play an important role in weight gain,” says Banting postdoctoral fellow Lana Vanderlee (photo by Frederic J. Brown/AFP/Getty Images)
University of Toronto nutritional scientists are leading a study with national experts calling on the Canadian government to outlaw junk food marketing to children, impose stricter limits on unhealthy nutrients added to foods, and impose a “sugary drink tax.”
Professor Mary L’Abbé, chair of the department of nutritional sciences in the Faculty of Medicine, and Banting postdoctoral fellow Lana Vanderlee made the recommendations in a newly released report, called the Food-EPI Study, funded by the Canadian Institutes of Health Research. In it, they examined Canada’s progress on obesity-curbing measures compared with other countries.

They found that Canada performed well on some important measures, such as political leadership to support healthy eating, and transparency in developing food policies, which if secretive can lead to undue influence by the food industry.

Health Canada has recently announced new policies for some important areas where Canada trails its peers. But in many areas, the authors say Canada still has work to do – for example, setting policies in retail stores and restaurants to help provide and market healthier foods, where there are almost no policies or programs at any level of government.

Despite the good news, there were notable disparities between provinces, with Quebec having the most progressive food policies, including a restriction of junk-food marketing to children, and some other provinces failing to do as much to protect residents. Even the foods and drinks that can be sold in schools varied across provinces and territories. Overall, Ontario fared roughly in the middle of the pack. “Even if we’re meeting best practices in some areas, we shouldn’t get complacent,” says Vanderlee (left). “Canada doesn’t have taxes on unhealthy foods, such as sugary drinks, even though the evidence from other countries suggests these work. If we don’t move on this front, we’re going to fall behind.”

Mexico, which has some of the world’s highest child obesity rates, is seeing success with a soda tax, and other countries are following suit, she says. The U.K. is on the verge of implementing such a tax, and South Africa just announced one.

“Most of the evidence indicates that sugary drinks are the biggest contributors to sugar consumption and play an important role in weight gain,” she says. “You don’t get as full when you’re drinking your calories and it’s easy to consume a lot of sugar in a short time.”

The federal government imposes no restrictions on marketing junk food to children, L’Abbé says, although they have announced impending regulations as part of the Healthy Eating Strategy.

“We know that marketing to kids changes what they want to eat and what they’re asking their parents to buy. And we know that it is the unhealthy foods that are the most heavily marketed to children,” she says.

Asking for voluntary industry co-operation to make foods healthier, with less sodium, hasn’t worked well in the past for all foods, she says. The Canadian government hasn’t made any voluntary or mandatory restrictions on the amount of sugar or saturated fat in foods either, nor have officials set any targets for levels in restaurant foods.

“The evidence is mounting that these kinds of government interventions work,” says Vanderlee. “But we know no individual policy is a silver bullet. That’s why Canada needs a comprehensive and co-ordinated strategy if we want to move the dial on obesity and diet-related diseases like diabetes, heart disease and cancer and keep up with international leaders.”