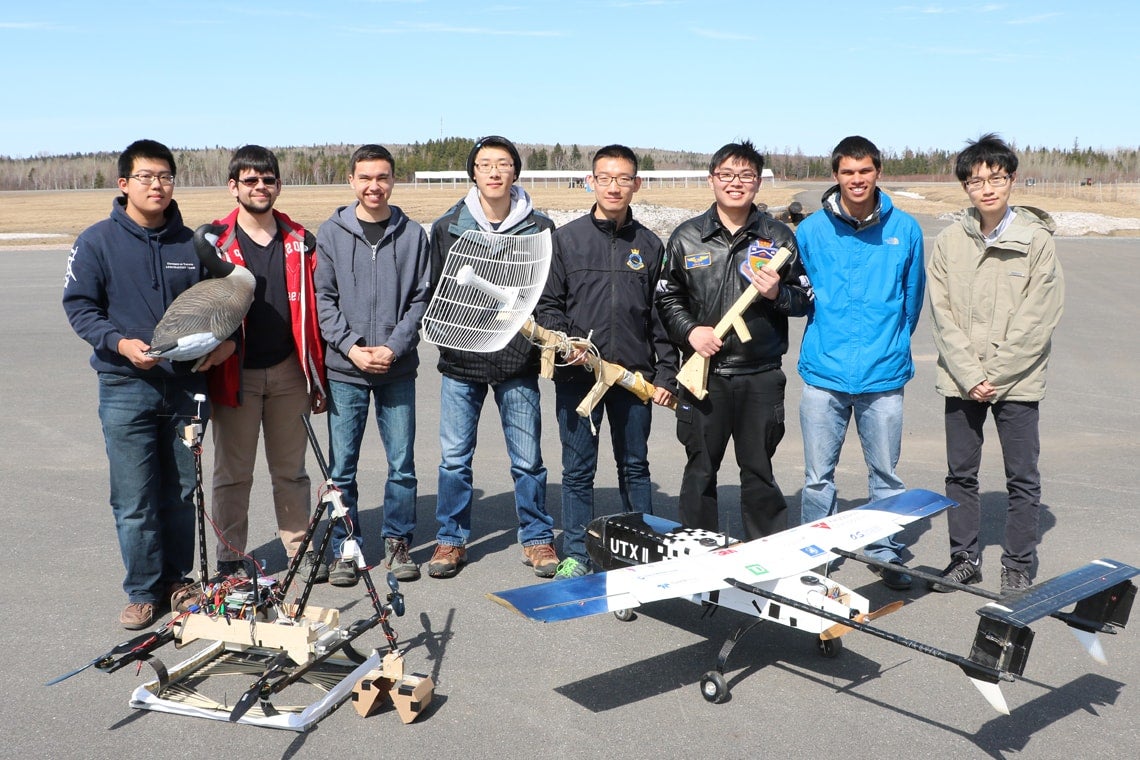 Building drones to locate the nests of four different types of geese in the Canadian wilderness – that's what a U of T engineering team had to do to take first place at the Unmanned Aerial System (UAS) Student Competition, organized by Unmanned Systems Canada.

The University of Toronto Aerospace Team’s (UTAT) UAV Division designed a two-drone system capable of meeting this year’s challenge: to survey and locate the nests of geese in remote areas. The competition took place between April 28 to 30 in Alma, Que.

The teams were also asked to retrieve an egg from one of the nests to be tested for environmental contaminants.

“I was totally impressed with the incredible enthusiasm and wonderful talent of these young university students,” said David Bird, an ornithologist and professor emeritus at McGill University. Bird often uses drones in his own research and devised the challenge for this year’s competition.

“It was a pleasure to be among them for the three days in Alma, and I was thrilled that they were being challenged by my goose census and egg sample retrieval,” Bird said.

“Retrieving the egg was particularly difficult,” says Rikky Duivenvoorden, an engineering student who acted as the safety pilot and technical advisor for UTAT’s UAV Division. “We’ve had to drop things before, but picking something up added a completely new dimension.”

The team created two separate vehicles: a fixed-wing UAV called UT-X2B to conduct the census and a quadcopter called UTX-D to retrieve the egg. Both vehicles can fly to a specified location autonomously, using GPS to navigate and visual cameras to capture images of their targets. The robotic arm used to capture the egg, however, is operated manually.

While no team managed to capture the egg during the initial run, the organizers invited all of the teams to demonstrate their retrieval mechanism on the competition’s second day. Teams were also judged on how well their aerial surveys matched the known distribution of simulated geese on the ground.

“It’s always tense because while you can see how well the other teams are flying, you can’t see any of the problems that they are having behind the scenes in terms of processing the images,” says Duivenvoorden. “We were really surprised and happy when we won.”

A second team from UTAT’s Aerial Robotics Division also did well at the competition – the team's vehicle, UT Skyhawk, combines both fixed-wing and quad-copter components. It placed fourth overall, and the team won the judges’ award for professionalism. Earlier this year, UTAT’s Aerial Robotics Division won the design phase of the competition, with the UAV Division coming in second.

This is Duivenvoorden’s fifth and final turn at the competition. After finishing his master’s degree under the supervision of the Faculty of Applied Science & Engineering's Assistant Professor Angela Schoellig last fall, he’s now launching a startup company, Keystone Composites. The company will manufacture carbon-fibre components with a better strength-to-weight ratio than those currently available and was directly inspired by the challenges the team faced in finding suitable materials for the drones. Keystone Composites is receiving support from Start@UTIAS, one of U of T Engineering’s two startup accelerators.

“From a technological standpoint, we’re basically there. From a regulatory standpoint, we have to share the airspace with manned aircraft so it’s very important to make sure that we ensure safety for everyone,” he says. “As autonomous systems like ours continue to improve, that will become easier to do.”