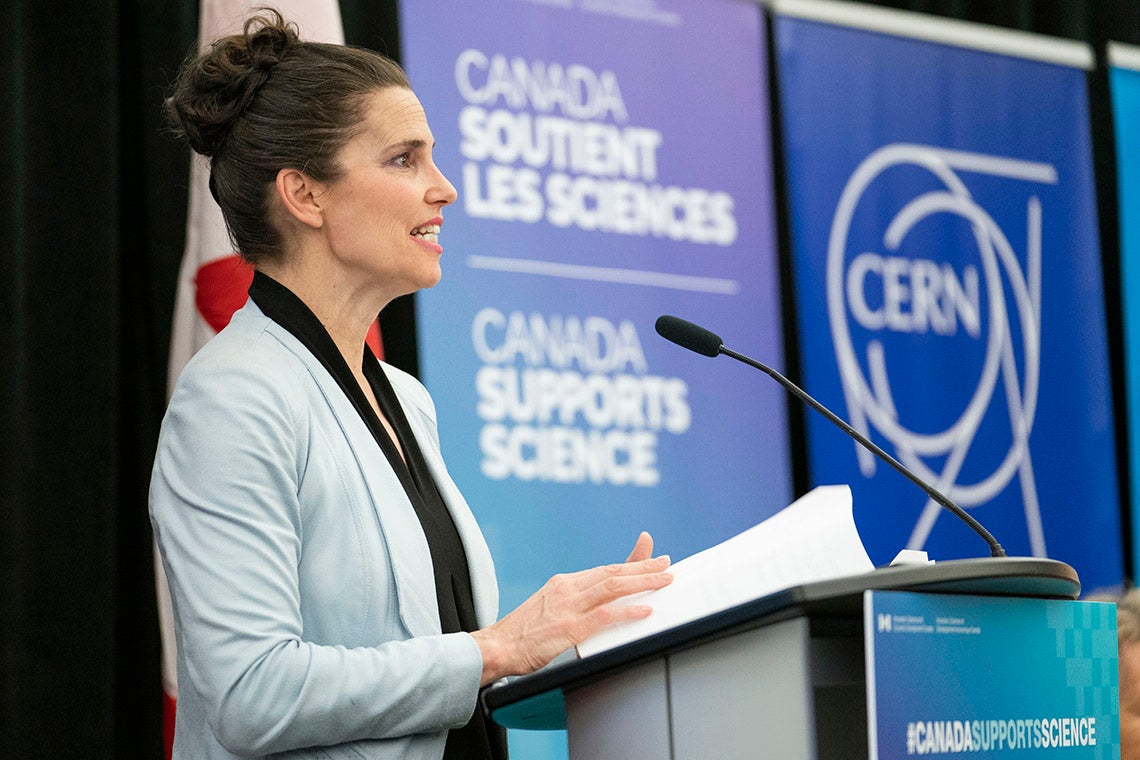 Science Minister Kirsty Duncan announced in Vancouver today that the federal government will give $10 million to the Large Hadron Collider, with TRIUMF giving another $2 million in kind (photo courtesy of Innovation, Science and Economic Development)

For more than a decade, a small team of high-energy physicists and graduate students from the University of Toronto have helped push the boundaries of scientific knowledge at the world’s most powerful particle accelerator.

Today, the Canadian government and TRIUMF, Canada’s particle accelerator centre, announced a $12-million investment to give a major performance boost to the Large Hadron Collider, known as the most massive and complex scientific experiment in human history.

The funding will go towards mission critical components in support of the new High-Luminosity Large Hadron Collider (HL-LHC or HiLumi), with Vancouver-based TRIUMF leading production of the Canadian components. HiLumi, which had a groundbreaking ceremony earlier this month, is expected to be operational by 2026.

“I am pleased to announce support for Canada’s outstanding researchers, engineers and technicians, whose combined efforts will further our reputation as a global leader in particle physics,” said federal Science Minister Kirsty Duncan in a news release.

The Large Hadron Collider, a high-energy particle accelerator operated by the European Organization for Nuclear Research (CERN), runs in a 27-kilometre circular tunnel buried 100 metres below the surface of the earth underneath France and Switzerland.

Since opening in 2008, it has enabled scientists to recreate the conditions that existed a billionth of a second after the Big Bang — and to study them in a controlled way. In 2012, researchers announced the discovery of the Higgs boson, the so-called “God particle” that gives other particles mass and makes life possible.

“Researchers at the University of Toronto welcome this important support by the Canadian government to help make one of the world’s most important scientific projects possible,” said Vivek Goel, U of T’s vice-president of research and innovation.

“For more than a decade, U of T researchers have worked side-by-side with colleagues from universities across Canada, at TRIUMF, and around the world to push our knowledge of the fundamental structure of the universe. We look forward to being a part of even more critical breakthroughs as we continue to play a role with the HiLumi project for decades to come.”

One of the areas in which U of T has been involved is the ATLAS detector, one of the main experiments at the Large Hadron Collider.

Right now, the U of T team on ATLAS comprises six faculty, four postdoctoral researchers and 20 graduate students. In the past decade, approximately 50 U of T students have worked at CERN, said U of T physics Professor Robert Orr.

In 2012, the U of T Atlas team (which included Orr and colleagues David Bailey, Peter Krieger, Pierre Savard, Pekka Sinervo, Richard Teuscher and William Trischuk) and their 2,500 ATLAS colleagues from 35 countries played a key role in the hunt for the Higgs boson.

The ATLAS detector, key components of which were built at U of T, was designed to search for new particles in the highest mass collisions of high-energy proton collisions in the Large Hadron Collider.

U of T faculty and graduate students sifted through the massive amounts of data from ATLAS using SciNet super computing resources at U of T to identify collisions containing Higgs boson candidates.

These sophisticated, ultra low temperature boxes will house crab cavities that “rotate bunches of subatomic particles before they smash together, significantly increasing the number of collisions, or luminosity, of the Large Hadron Collider.”

The souped-up particle accelerator “is very good news — something we’ve been waiting for for quite some time,” said Sinervo. “It will ensure Canada has the official status at CERN that it so appropriately deserves given all the contributions Canadians have made to the experiments and the accelerator.” The assembly of the crab cavity housing, a cryostat that will serve as a high-performance coldbox, keeping the cavities at their operating temperature (photo by Maximilien Brice/CERN)

The discovery of the Higgs boson was huge, confirming the existence of all the particles making up the Standard Model of particle physics, as well as the existence of the mechanism that gives mass to all the fundamental particles, Orr explained.

Nevertheless, much remains to be discovered and puzzles resolved, such as: Why the pattern of masses? What is dark matter?

“In the context of the Large Hadron Collider, the most important puzzle is the surprisingly small mass of the Higgs,” Orr said.

“Our theoretical understanding leads us to believe this small mass of the Higgs implies there should be a whole zoo of ‘supersymmetric’ particles observable at the LHC. They have not been,” he said.

On the other hand, Orr said the non-observation of this supersymmetry may also be telling because it “would finally demonstrate that we have to think of some other mechanism that keeps the mass of the Higgs small.

“This could lead to a complete sea change in our understanding of the basic structure of matter.”

With files from Jenny Hall