Can green infrastructure keep microplastics out of the environment? 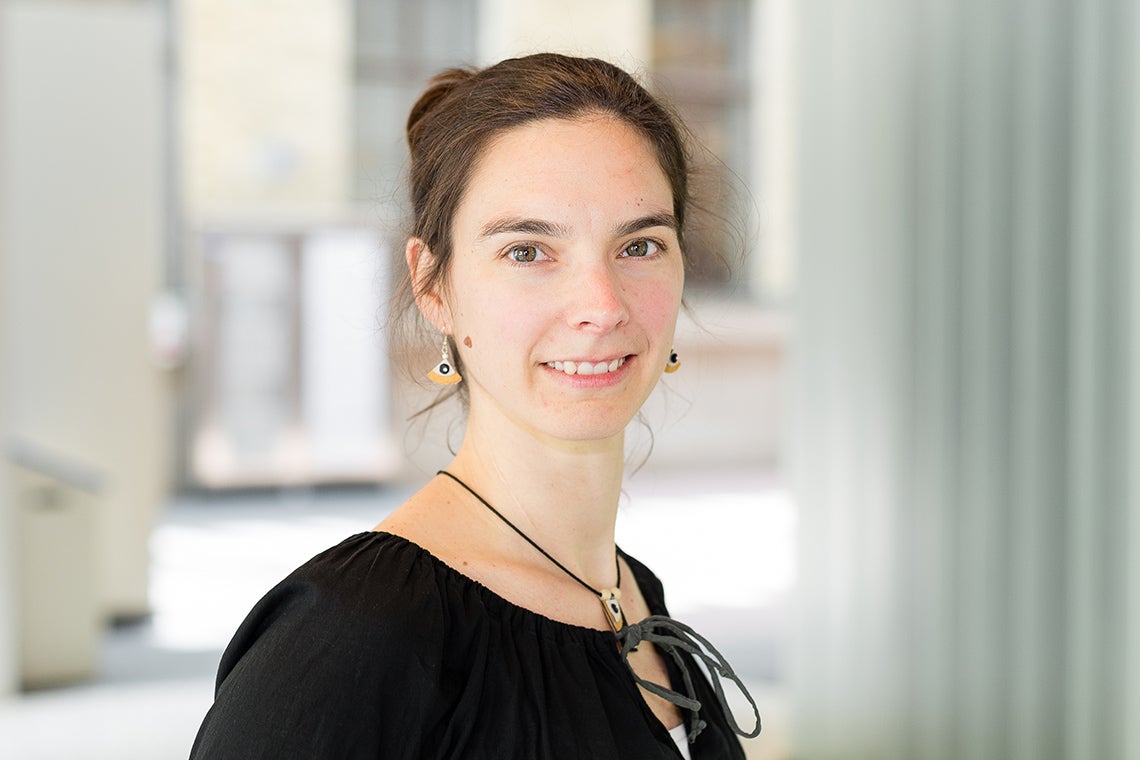 You may have heard of the Great Pacific garbage patch, a large collection of ocean debris, but the majority of plastic waste in the environment is subtler: tiny particles ranging from the size of a pea to the thickness of a human hair – or smaller.

A team of researchers in the civil and mineral engineering department in the Faculty of Applied Science & Engineering – including Associate Professor Elodie Passeport, Associate Professor Jennifer Drake and PhD Student Kelsey Smyth – are studying what happens to these microplastics as they make their way into ditches, streams, rivers and lakes, especially during heavy rainstorms.

In a paper published earlier this year, they showed that human-engineered structures known as bioretention cells are a useful strategy for controlling microplastics in the environment.

Writer Tyler Irving sat down with Passeport to talk about some of her team's recent research.

Can you briefly describe the challenge you’re dealing with?

Any time it rains in an urban area, the water doesn’t infiltrate into the soil the way it would in nature, because there are roads and parking lots and buildings in the way. The water flows over them and carries anything accumulated on these surfaces along with it.

Microplastics are one of the many forms of contamination in this water. They often take the form of microfibres that come from our clothing – polyester fabrics, for example – which are not only shed by people walking around the city, but also arrive from further away via atmospheric deposition, that is, through the air. There are also a lot of plastic pieces from litter, such as polystyrene food containers or polyethylene plastic bags, and bits of rubber, mostly from car tires.

The question is: Can we filter them out?

What is a bioretention cell?

There are lots of different designs, but what they all have in common is that they aim to control stormwater volumes and peak flows by providing a more natural flow of water. They consist of a depression in the ground from which the natural soil has been removed, and then filled with some kind of engineered media that allows water to flow through. They are often planted with vegetation as well.

Over the past 20 years or so, we’ve started to see more bioretention cells in our urban environments: There are some on the Toronto waterfront. One of the ones we’ve studied in detail is at the Kortright Centre for Conservation in Vaughan, Ont., which is managed by the Toronto and Region Conservation Authority.

Slowing down the flow of water helps control stormwater surges, but it can also help remove solids that are suspended in the water by physically trapping them.

Microplastics are not easily degradable by bacteria, but they are a form of suspended solids, so we wanted to know whether the bioretention cell would be able to trap them.

Yes. If you take just a “black box” approach where you only look at what comes in and what goes out, you find that there are 84 per cent fewer particles at the end than at the beginning. But there are some caveats to that. 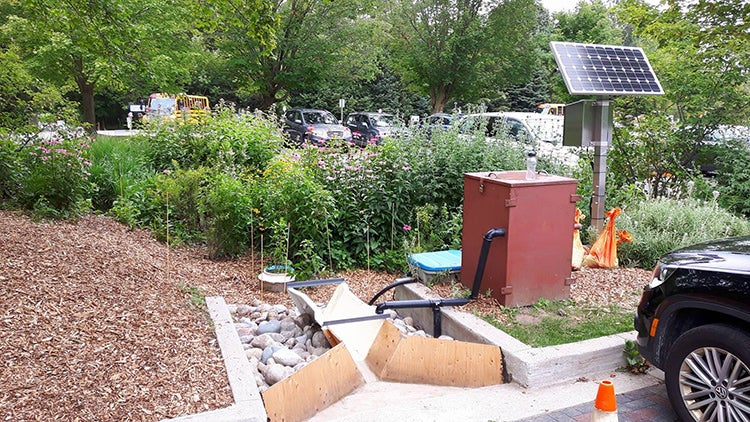 Studies carried out at this bioretention cell, at the Kortright Centre for Conservation in Vaughan, Ont., suggest that engineered urban green infrastructure can help prevent some types of microplastics from getting into the environment (photo by Leanda Rhodes-Dicker)

The first is that we only looked at microplastics whose size ranges from five millimetres down to 100 micrometres, or about the width of a human hair. We don’t know what’s going on at the size fractions smaller than that.

The second is that we didn’t look at what happens to the particles that were filtered out. We know they are not going to biodegrade, at least not on a time scale that is relevant to the life of the bioretention cell.

It is unlikely that the microplastics alone could be the cause of clogging in bioretention cells. But together with other suspended solids, they can increase the time needed for water to infiltrate, and the media would have to be taken out and replaced.

How do you actually measure microplastics in soil or water samples?

It’s actually very time-consuming. The first thing to do is a simple organic digestion, to get rid of dissolved organic carbon and the bits of grass or insect parts that you don’t want to count as plastic. Then you can do a separation by density to get rid of minerals or inorganic material that isn’t plastic either.

But then what you have left has to be visually identified by hand using a microscope, to make sure that it really is plastic, and to figure out what kind of plastic it is. We are so lucky to have received the tremendous help of 11 undergraduate students to date on this important manual sorting and counting task, which can take 20 to 40 hours per sample.

We also use chemical analytical methods such as spectroscopy to identify what types of plastics we’re seeing: for example, polyester versus polystyrene. One of the interesting things we find by doing this is that a lot of it is actually cellulosic material. This often comes from cotton clothing, such as blue jeans. That material is not plastic and it is biodegradable, but it doesn’t degrade very quickly, even in engineered environments like bioretention cells.

The ultimate goal would be to help people optimize the new bioretention cells they are building. For example, this filtration that we know is happening: Is it happening at the surface of the bioretention cell, or is it happening all the way through the medium? If it’s the former, maybe you only need to replace the top five or 10 centimetres every few years to keep the cell working at maximum efficiency.

I also want to know a lot more about the smaller size fractions, the ones we haven’t examined. At a certain point, microplastics turn into nanoplastics, and there’s a lot to learn about those.

We’ve recently joined a new multidisciplinary microplastics research project led by Jill Crossman at the University of Windsor. Professor Miriam Diamond, of the department of Earth sciences in the Faculty of Arts & Science and department of chemical engineering and applied chemistry, and Maria Dittrich, a professor of environmental science at U of T Scarborough, are also involved. Together, we’re going to be developing even more tools to track and characterize microplastics from a variety of samples.

We’re also improving our analytical methods. With Shuyao Tan, a PhD student co-supervised by myself and Associate Professor Josh Taylor in the department of electrical and computer engineering, we have developed a simple and fast prediction method of microplastic counts from measurement of a sample mass, which will significantly reduce sample process time.