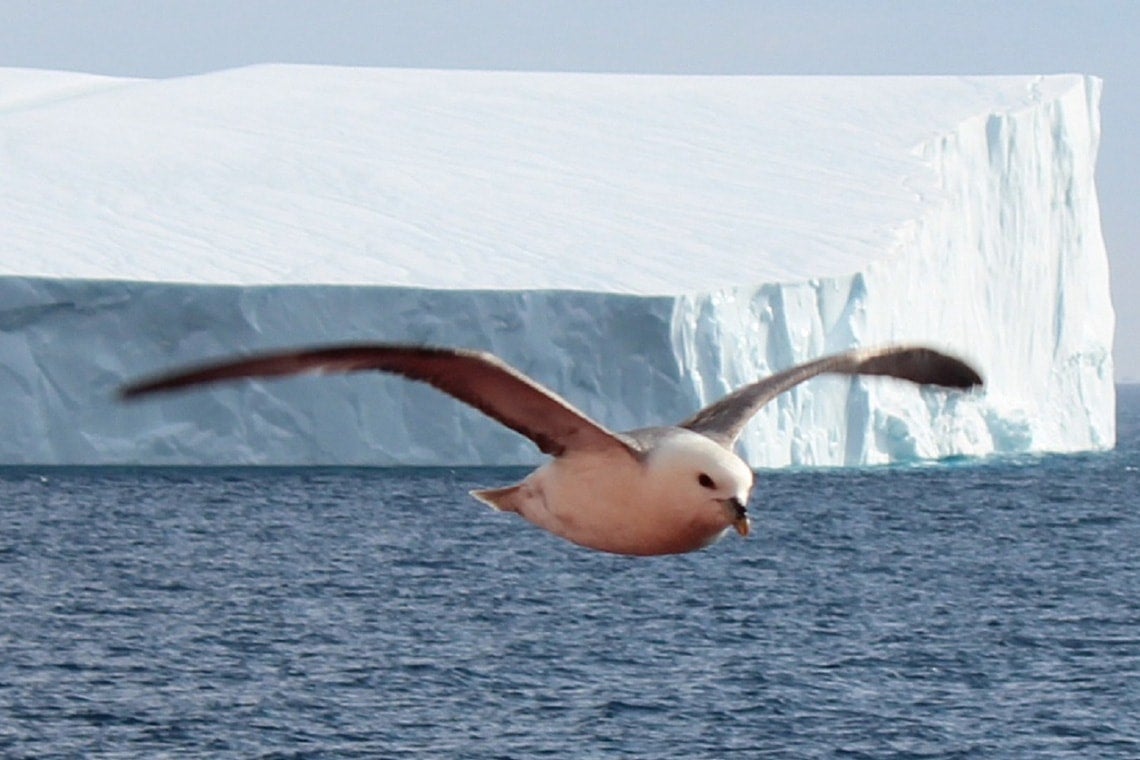 The arctic seabird in flight (photo by Jennifer Murphy)

Seabird colonies play a key role in cooling the summertime Arctic by helping create cloud cover from the sun, says a new study led by U of T researchers.

How do the birds create that cloud cover? They do it through their poop, the researchers found.

Their study reveals an incredible example of the delicate balances found in nature – and it's making headlines around the world.

Millions of seabirds migrate to the Arctic each summer to feed in its nutrient-rich waters. The researchers found that the ammonia from the guano or excrement they produce helps bring airborne particles together to form clouds that reflect the sunlight. The study is published today in Nature Communications.

It is part of a complex interaction of ecology, chemistry and physics that acts as a kind of natural thermostat for nature, but the scale of the seabird impact startled the researchers. Ammonia is normally associated with agricultural activity, which is virtually non-existent in the Arctic.

“The three big surprises were finding out there was ammonia in the summertime Arctic, and that the seabird colonies were the major source, and that the ammonia had a notable role in producing a cooling effect on the climate,” says Greg Wentworth, an atmospheric scientist with Alberta Environment and Parks who took part in the research while he was a PhD student at U of T.

“It certainly brings home the fact that everything is connected.”

Researchers were playing a hunch when they travelled to the Arctic in the summer of 2014 to look for signs of ammonia, adds Wentworth’s former academic supervisor and study co-author Jennifer Murphy, a chemistry professor in U of T's Faculty of Arts & Science.

Previous studies had measured high levels of ammonia in the atmosphere downwind from penguin colonies in Antarctica. Murphy and Wentworth wanted to see if the same conditions existed in the Arctic, where millions of birds are known to migrate each year.

“It’s something that may have existed for a long time, but nobody had ever made these measurements in the Arctic before,” says Murphy, who travelled with Wentworth on the Canadian Coast Guard icebreaker Amundsen to conduct the atmospheric readings.

The real excitement came when they got home and plugged their findings into existing computer climate models, which had previously not accounted for the seabird colonies’ ammonia emissions, largely concentrated between Ellesmere Island and Greenland.

“We believed our measurements, but we didn’t know the impact until all of a sudden the models started generating these new (cloud-forming) particles.”

The new study comes amid growing scientific alarm about the rapidly warming Arctic, where sea ice is melting due to climate change created by airborne pollution.

Summer provided the perfect conditions to study the Arctic atmosphere because the prevailing winds at that time of year keep away pollution from other parts of the world, temporarily creating one of the most pristine ecosystems on Earth.

Stunning vistas of sea ice, mountains and open water in the land of the midnight Sun made a lasting impression, says Wentworth.

“It really focuses the idea of what is going to happen to these seabirds in a warming Arctic susceptible to industrialization, and how their populations may change, which will affect emissions that in turn will affect the climate.”

The study was part of a wider climate project led by U of T chemistry professor Jon Abbatt called NETCARE, a national network of government scientists, professors and students collaborating on research funded by the Natural Sciences and Engineering Research Council of Canada.

Murphy and Wentworth used climate models provided by study co-author Betty Croft of Dalhousie University to calculate the impact of their findings.

“Never in my wildest dreams before we went up to the Arctic three years ago would I have thought seabirds would make this kind of contribution to the climate,” says Wentworth.