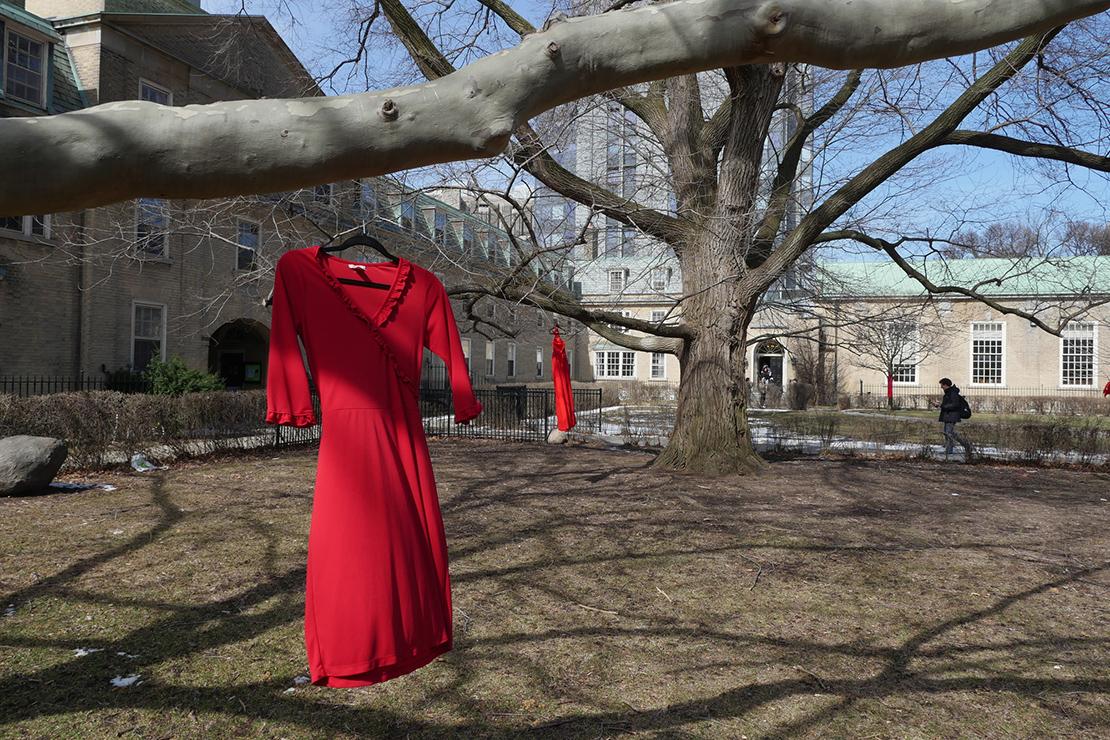 Red dresses can be seen hanging from the trees on the U of T St. George campus in 2017 as part of the Red Dress Project, symbolizing the missing and murdered Indigenous women and girls (photo by Hannah James)

The Indigenous Centre at the University of Toronto Mississauga is hosting a series of sessions on the 231 calls for justice by the National Inquiry into Missing and Murdered Indigenous Women and Girls, which issued its final report in 2019.

It was aimed at expanding understanding and awareness of the calls for justice that were directed at governments, institutions, social service providers, industries and Canadians in general.

“We want people to think about how we are honouring and supporting these families still looking for missing loved ones,” says Tee Duke, assistant director of the Indigenous Initiatives Equity, Diversity and Inclusion Office at U of T Mississauga. “To let them know they still matter.

“We really encourage all folks to attend, to take this opportunity to learn more about the MMIWG inquiry and the movement. We hope it will be a time of self-reflection to think about ways the community can work to meet these calls.”

The Jan. 20 session was led by Indigenous community educator and advocate Lorena Garvey.

“She provides community education on topics from urban Indigenous issues to supporting Two-Spirit people, so she is very well-versed in a lot of different topics and skills,” Duke says.

The inquiry was prompted in part by a 2011 Statistics Canada report, which estimated that between 1997 and 2000 the rate of homicides for Indigenous women and girls was almost seven times higher than that for other females.

Under the guiding principle that “Our Women and Girls are Sacred,” the National Inquiry examined the security of First Nations, Métis and Inuit women, girls, and 2SLGBTQQIA (Two-Spirit, lesbian, gay, bisexual, transgender, queer, questioning, intersex and asexual) people through factors including sexual and family violence, negligence, accidents, suicide, institutional racism in health care, child welfare, policing and the justice system.

Duke advised participants to look over the Inquiry’s executive summary to get the most out of the session.

“Know the why, the background, what the movement is trying to do,” she says. “The final report is so connected to the personal narrative and experience of the families and communities impacted.”

The National Inquiry ran from 2016 to 2019 and spoke to 2,380 family members, survivors of violence, experts and Knowledge Keepers (those taught traditional values by a community Elder) at hearings across Canada.

Funded by a Campus Safety Grant from the Ontario government, the Jan. 20 lunch-and-learn session functioned as an introduction to a larger two-day session to be held on Feb. 9 and 11 that will delve deeper into the MMIWG inquiry’s calls for justice. The event will feature Qajaq Robinson and Karine Duhamel, who were commissioner and director research, respectively, for the national inquiry.

“This series of events aims to raise awareness about the disproportionate violence and ongoing legacy of colonization still facing Indigenous women, girls, and two-spirit people”, says Nythalah Baker, U of T Mississauga’s director equity, diversity and inclusion. “Sessions will also provide the opportunity for bystanders to learn about actions to take individually and systemically to decolonize spaces and increase cultural and community safety.”