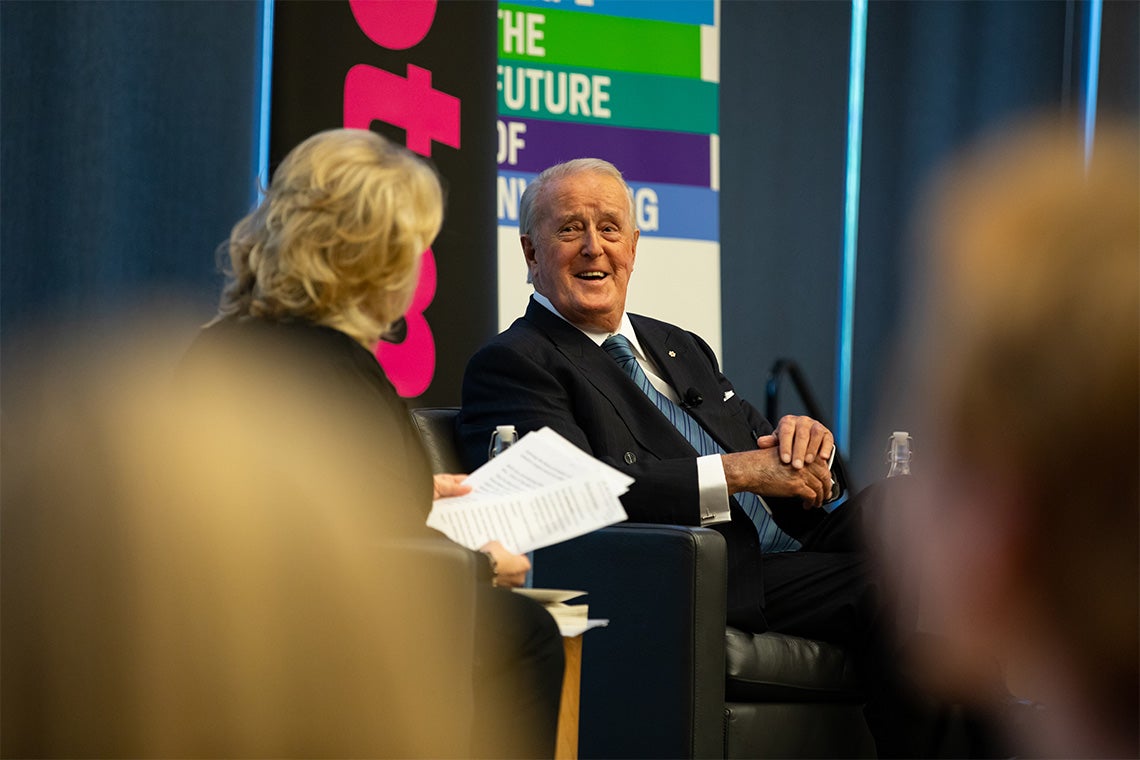 Speaking at an event at the Rotman School of Management, former Prime Minister Brian Mulroney said Michael Wilson, U of T's 33rd chancellor, was Canada's most impactful finance minister (photo by Johnny Guatto)

A principled human being, a proud Canadian and the country’s most impactful finance minister – that’s how history will remember the late Michael Wilson, says former Prime Minister Brian Mulroney.

Mulroney made the remarks at an event this week – hosted by the University of Toronto’s Rotman School of Management and co-presented by CFA Societies Canada – that focused on the legacy and impact of Wilson, who served as finance minister from 1984 to 1993 and as U of T’s 33rd chancellor from 2012 to 2018.

“The big-ticket items for which Michael was responsible are the things that live on in history because they are the policies which shaped the nation,” Mulroney said during a conversation with Sen. Pamela Wallin.

“[Canada is] 155 years old – and 155 years from today, there will be people – historians – who will be writing that if we have this kind of prosperity and foundational strength today, there was a guy way back when – his name was Michael Wilson – and he was responsible for this.”

Mulroney also discussed several anecdotes that Wilson shared in Something within Me, a memoir that was published posthumously by University of Toronto Press earlier this year – and which features a foreword by Mulroney.

A Trinity College alumnus, Wilson graduated from U of T with a degree in commerce before embarking on a successful career in finance. He was first elected to Parliament in the late 1970s and served as finance minister for seven years beginning in 1984, during which he was involved in negotiations of the Canada-U.S. Free Trade Agreement and the implementation of tax reforms and the GST. 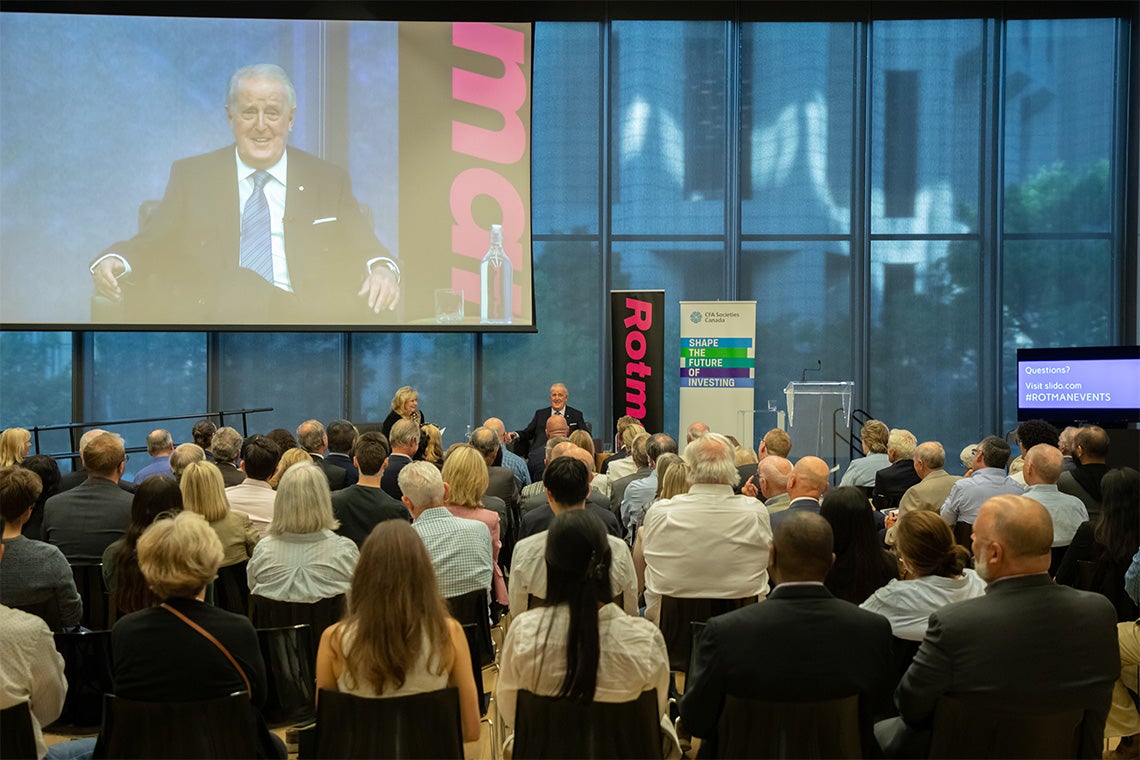 Former Prime Minister Brian Mulroney shared anecdotes about the late Michael Wilson’s time in cabinet during a conversation with Sen. Pamela Wallin at the Rotman School of Management (photo by Johnny Guatto)

“Michael left a lasting impression on the university through his tireless service as an ambassador to the alumni community and beyond,” said Janet Ecker, chair of U of T’s Governing Council, in her opening remarks at the event.

“He had a richly deserved reputation for genuine warmth and humanity and for regularly engaging students and faculty in meaningful ways.”

Ecker noted Wilson was also a prominent advocate of awareness of and support for mental health issues following the tragic loss of his son, Cameron.

Sen. Wallin then began the conversation with Mulroney, who set the tone early by labeling Wilson the greatest finance minister in Canada’s history.

Mulroney shared several recollections of Wilson’s involvement in negotiations over the Canada-U.S. Free Trade Agreement – particularly the tension around Canada’s insistence on an independent dispute-settlement mechanism, which caused the American negotiators to balk.

He recalled phoning Wilson in Washington, D.C., as the deadline for negotiations loomed, and asking for his thoughts on how to handle the situation.

A few minutes later, U.S. negotiators agreed to the key mechanism – an example, Mulroney said, that highlights the close relationship between the two countries at the time.

“To give you an idea of the relationship we had of complete trust and confidence: at that moment, with 15 minutes to go before the end of the ball game, Michael and I spoke and he said to me, ‘Hang in there,’” Mulroney said. “And that’s what I did. And that’s why we got the deal.” 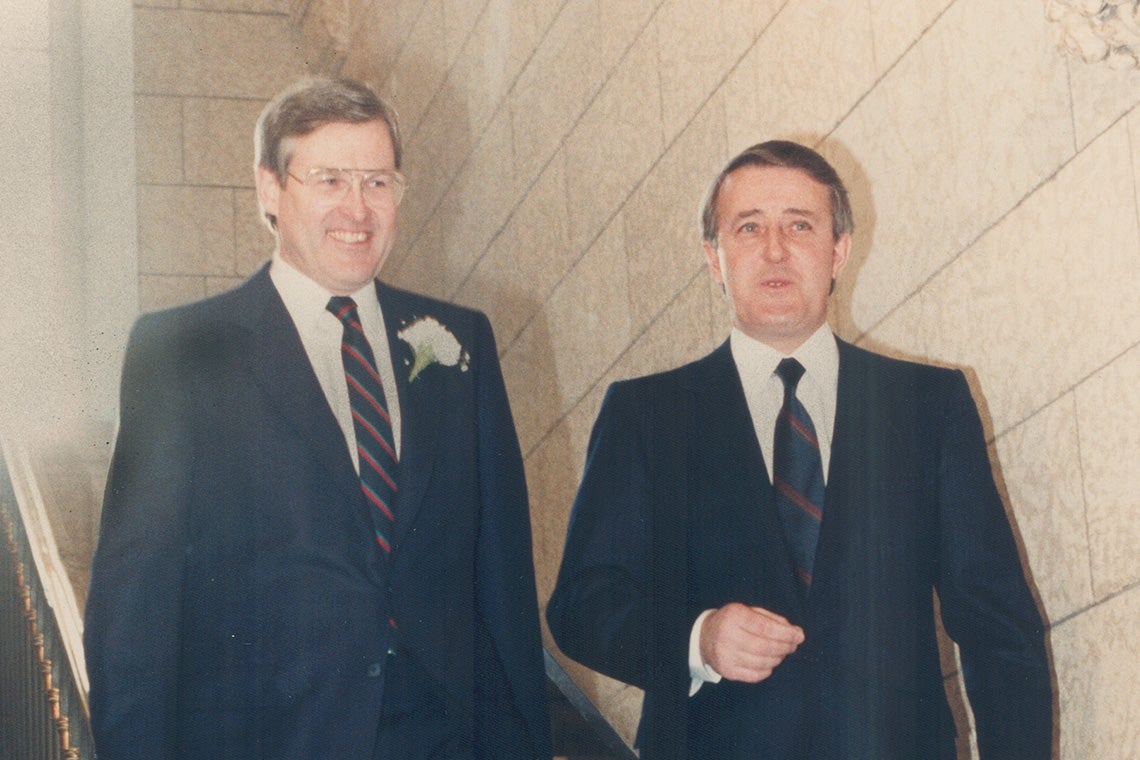 Mulroney said he and Wilson prioritized Canada interests above political considerations, which is why they decided to forge ahead with the implementation of GST in 1991 despite it being a politically unpopular move.

Mulroney also used the event to pay tribute to Her Majesty Queen Elizabeth II, with whom he said he had “a very good relationship.”

The first of their many meetings, he recalled, took place in New Brunswick just five days after Mulroney was first elected prime minister in 1984. “I found her to be resolute, charming and knowledgeable – very knowledgeable,” Mulroney said.

Sen. Wallin noted Wilson’s memoir included recollections about engagements with the Queen and with Prince Philip – one of which served as an example of Wilson’s dry sense of humour. “Prince Philip once came over to [Wilson] and said, ‘And what do you do?’” Sen. Wallin said. “And Michael’s response was: ‘I work for your wife.’”

Mulroney added: “We all did.”