Bob Rae on the Rohingya crisis: 'We need to be a more significant player' 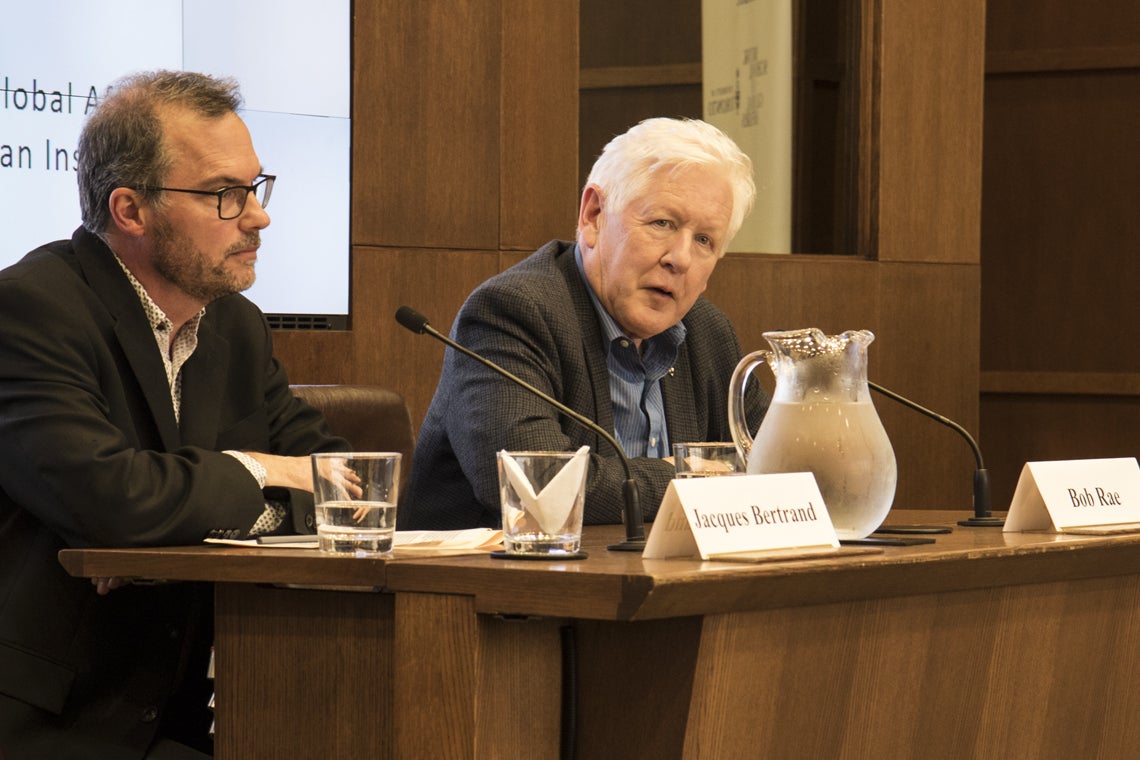 It’s been more than a month since the release of his final report on the Rohingya crisis in Myanmar, and Bob Rae says he’s still waiting to hear a response from the federal government.

Speaking at an event at the University of Toronto's Munk School of Global Affairs on Thursday, the former Ontario premier and former interim leader of the federal Liberal party, repeated his call for Canada to take a lead in dealing with the humanitarian crisis that has led to more than 700,000 Rohingya Muslims fleeing violence in Myanmar for crowded refugee camps in neighbouring Bangladesh.

“We are living in a world without adult supervision,” he said. “We can’t assume anymore that some other country is going to take the lead and ride this thing through and get it done. That isn’t happening on its own.”

Rae, a U of T alumnus who also teaches a policy analysis class in the Faculty of Arts & Science, was appointed as special envoy to Myanmar last fall by Prime Minister Justin Trudeau. While Trudeau has thanked Rae for his insights and said the government would outline measures in coming weeks, Rae said he has yet to hear back from Minister of Foreign Affairs Chrystia Freeland on any proposed measures.

His final report, released April 3, made 17 recommendations, including calling on Canada to step up humanitarian aid and development efforts. On Thursday, Rae talked about the humanitarian crisis looming with monsoon season expected to begin in June.

“This is a genuine humanitarian catastrophe, and it’s going to be even worse if we don’t address it,” he said.

“I keep coming back to our own government and saying, ‘We need to take the lead on this,’” he told the audience of academics and students. “I’m still hoping very much the government is going to respond in a creative and positive way. That’s one of the battles that I’m fighting right now.”

Rae spoke at the event with Jacques Bertrand, a political science professor who specializes in Southeast Asia and is leading a collaborative project on ethnic minorities and decentralization in Myanmar. Leading up to his report, Rae travelled to the region on several occasions, including visiting refugee camps in Bangladesh.

Read more about his work on Myanmar

His report has also called for Canada to pursue a policy of active engagement with the government of Myanmar, continuing to provide development assistance and working with allies to begin an investigation into crimes against humanity and genocide.

“We have to stay engaged,” he said. “Our aid programs have to be based on what we can do on governance, what we can do to deal with basic traditions. We need to be a more significant player in the group of countries that are engaged in Myanmar.”

His report has also addressed the thorny issue of refugee resettlement. He has called on Canada and its allies to talk about resettlement, including the possibility of bringing Rohingya refugees to Canada. But he cautioned that unlike other refugees, he’s not sure the Rohingya want to be resettled elsewhere.

“I don’t think a refugee community of that size with a clear determination and attachment to their land are going to want to move off that objective….We should not abandon the objective and say, ‘Well you either settle in Bangladesh or you try to settle in a third country.’ That would be condoning the kind of forced departure that we’ve seen.

“I think my report is infused with a lot of pragmatic ideas, but we have to recognize, certainly from my discussions with the Rohingya people and leaders that I’ve talked to, the focus is still on what are the conditions and terms under which to go back. And right now, there’s a huge gap between the conditions that are being insisted upon by the government of Myanmar and the conditions that they would be willing to accept.”