Blue Sky Solar Racing at the University of Toronto 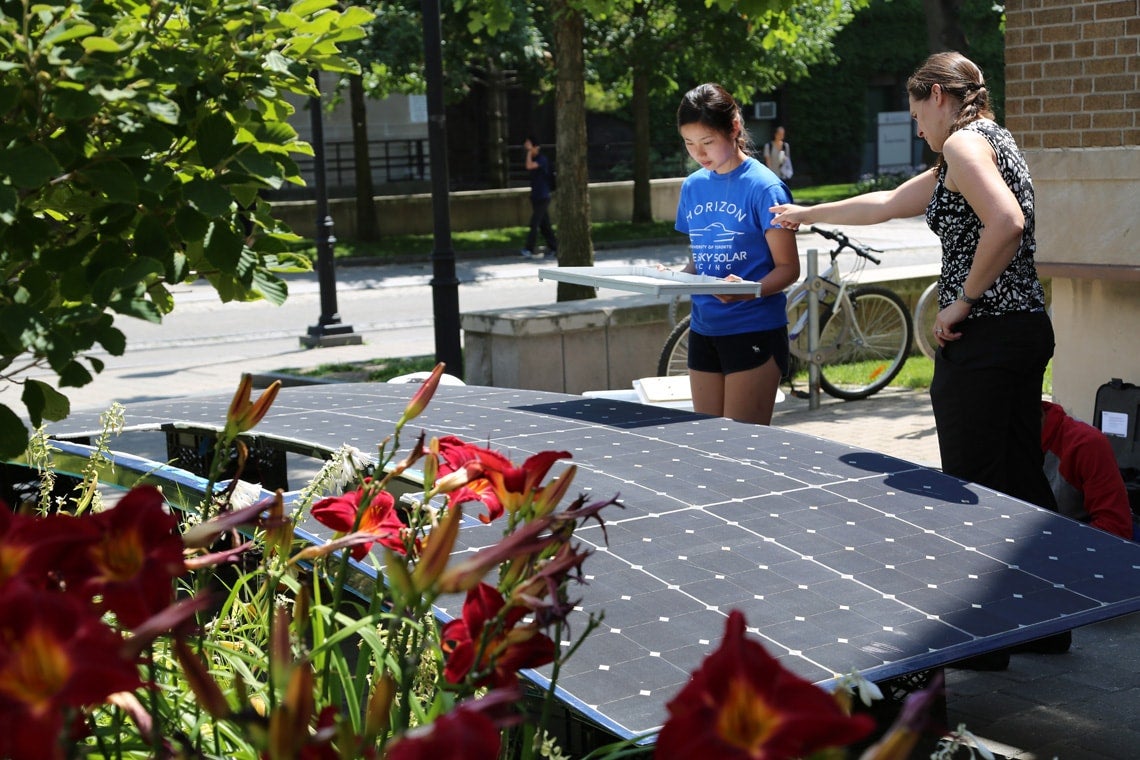 (All photos by Marit Mitchell, Faculty of Applied Science & Engineering)

Three hours before they were scheduled to set off for Pittsburgh and the American Solar Challenge, the members of the Blue Sky Racing Club had a problem.

The maximum power point tracker – the module that relays power from the solar panels on the top of the car to the various systems below, including the electric motor – was overheating.

Think of it as the solar-powered-car equivalent of heart failure.

“This is a very complicated circuit that has been optimized over a decade,” Frank Gu, the second-year electrical and computer engineering student who serves as Blue Sky managing director, explained in a remarkably calm voice.

“Our latest revision included an upgrade to the amount of power allowed on this board. But the inductor is not behaving the way it should and is getting very hot.” 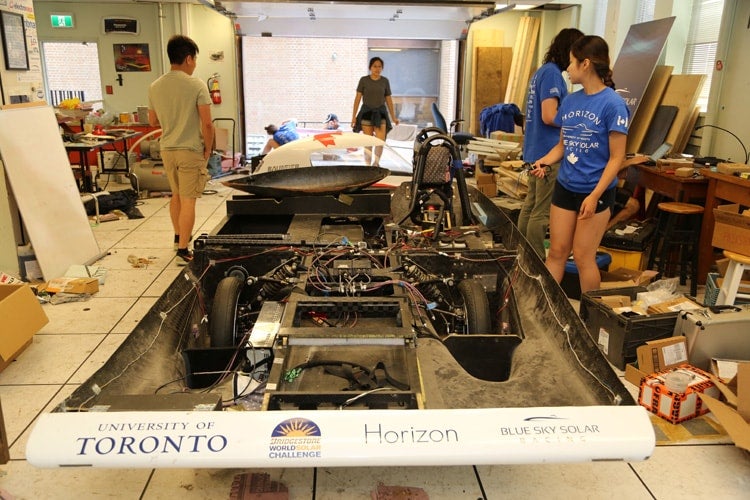 Happily, swapping the inductor with a factory-made unit resolved the problem, much as a bypass (or other procedure short of a transplant) might repair a human heart.

“All of the software stuff, we can fix on the road, on the fly,” Gu added, without even a soupçon of urgency. “But we want to make sure that the hardware is OK.”

While the electrical people worked on the inductor swap, other students attended to myriad other matters in and around the Engineering Annex workshop. That’s where this undergraduate club upholds the almost two-decade-old Blue Sky tradition of manufacturing race-worthy solar-powered cars for the love of it. 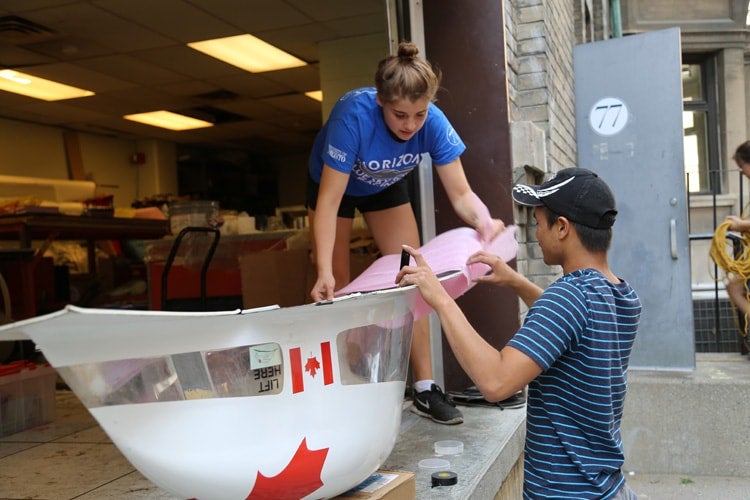 “A lot of stuff we’re taking down to Pittsburgh,” noted Sean Doughty, the engineering science student in charge of mechanics and manufacturing. “As the pressure increases, everyone just keeps working. We always get it done one way or the other.”

Duties on this final morning were as fundamental as lifting and securing the 230-kilogram Horizon – as this latest edition of the Blue Sky Solar Racing car is evocatively named – into a trailer and as mundane (but crucial in their own way) as packing the sleeping bags and camping gear. 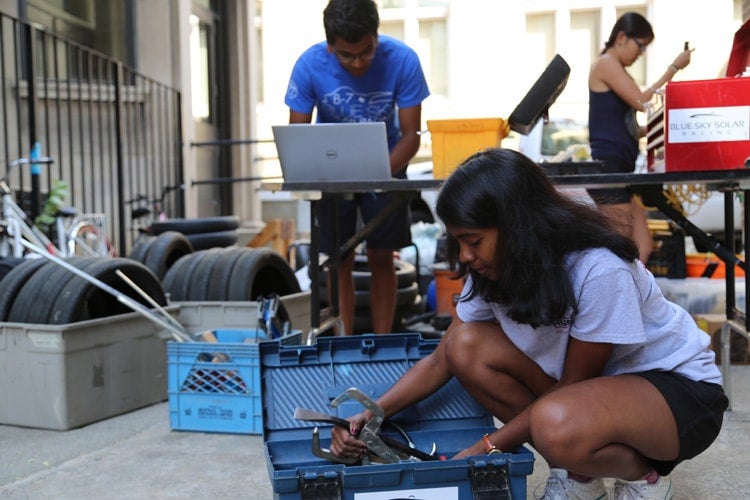 The 18 students from the Faculty of Applied Science & Engineering at the core of the Blue Sky team will not be sleeping at the Ramada, or even the KOA. The first overnight of the two-week-plus adventure would be on the grounds of the Pittsburgh International Speedway in Wampum, Pennsylvania, where the cars built by 20 university solar clubs from across the continent are subjected to technical compliance inspections by American Solar Challenge scrutineers.

The race (or “rayce,” as the Solar Challenge organizers cleverly render it) starts in earnest on July 30 at Cuyahoga Valley National Park in Brecksville, Ohio, with a checkpoint at Dayton Aviation Heritage National Historical Park (where the Wright Brothers conducted many of their experiments in heavier-than-air flight).

Other stops are in Vincennes, Indiana; St. Louis and Republic (both Missouri); Topeka, Kansas; Beatrice and Gering (both Nebraska) before reaching the chequered flag on Aug. 6 at Wind Cave National Park in Hot Springs, South Dakota.

Some of these municipalities are near public parks and campsites but it is not inconceivable that the Blue Sky squad might find itself sequestered on the grounds of a hospitable church or high school.

In any case, accommodations are likely to be less rugged than they were last October in biennial World Solar Challenge in Australia, where the Horizon finished an honourable 12th in a field of 27 in the Challenger Class. (One of the more memorable camping sites in the Outback needed to be cleared of cowpies.)

Most of the technical adjustments the Blue Sky people have made to Horizon over past two weeks are intended to meet the American Solar Challenge safety regulations, which differ from those that prevailed in Australia.

Strange to say, attaching the body of the car (principally the design of Blue Sky alumnus Neil Wu) to the chassis at the World Solar Challenge was simply a matter of applying a high grade of tape (not duct tape, the participants insist, with much laughter). This simple but effective method had the added beneficial effect of sealing the seam completely from outside air.

The American Solar Challenge requires top and bottom to be attached by buckled fasteners. Rollbar dimensions in the cockpit are also different.

Regulations in the 63-page rulebook are many and detailed.

“Solar cars must be equipped with a horn that can be heard at a sound power level between 75 and 102 dBA at a distance of 15 metres in front of the solar car” is one of the simpler examples.

Cellphones are allowed but must be hands-free. Communication with drivers is frequent and necessary. Solar cars are built for efficiency on uninterrupted flat terrain, not the unpredictable conditions that prevail on country roads in Ohio. 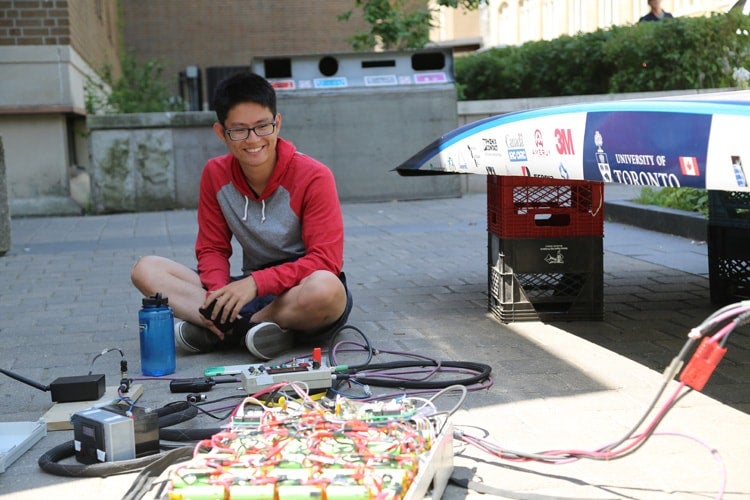 “Nobody takes roadkill in account when designing a solar car,” Zhe Gong, Gu’s predecessor as Blue Sky managing director and now a member of the safety oversight group, notes outside the workshop. “They just send a vehicle ahead to clean up.”

Indeed, the team in the lead endures a disproportionate burden of this unenviable duty.

The American Solar Challenge will differ from the Australian experience in presenting more hills and dales to negotiate with maximum efficiency. Student drivers (there are two for Blue Sky) must take care to finesse the accelerator. “Flooring it” carries the risk of stalling.

The “rayce” unfolds over eight days and 1,975 miles (the American Solar Challenge speaks in miles rather than kilometres). Performance is based on the elapsed time of consecutive daytime runs.

“That would be pretty funny, if a solar car race went through the night,” Gu comments. 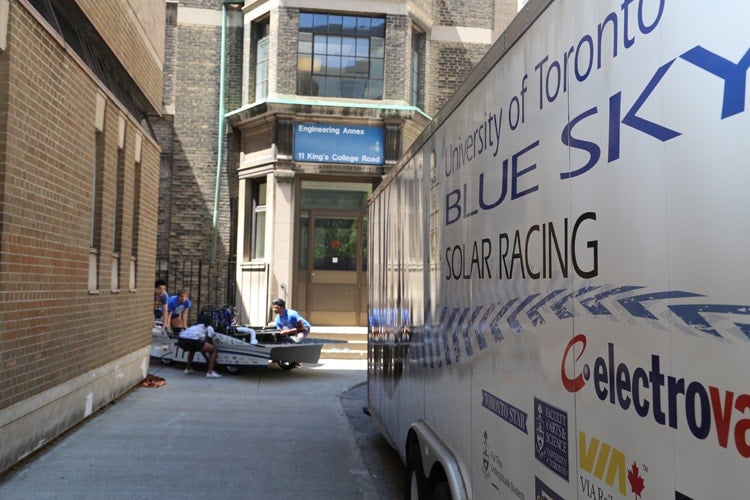 Forward motion is derived from the sun but a battery is necessary to buffer power during cloudy periods. Even five or ten seconds of cloud cover would otherwise bring the Horizon to a standstill. Teams are allowed to recharge their batteries through solar exposure in the evenings from 6 p.m. to 8 p.m., when all batteries must be locked away.

American Solar Challenge official police this activity, but a spirit of goodwill prevails. Participants share insights and even parts if competing teams find themselves in difficulty.

“I think this kind of experience is fantastic for all our students,” Professor Jun Nogami, chair of the department of materials science and engineering, who dropped by on this busy morning to convey his best wishes.

“It’s hand-on learning, it’s working in a team, and it’s working to a real deadline. It offers something completely different from what you learn in the classroom.”

While the point of every race is to win, the unspoken objective of the Blue Sky team is to finish high in the middle of the pack. Unlike the Challenger Class of the World Solar Challenge, the American Solar Challenge permits three-wheeled cars, which have a natural advantage.

The odds of a Blue Sky victory might be long with so many three-wheelers in the field, but winning in this case – pace Henry Russell Sanders and Vince Lombardi – is not the only thing.

“They have a 100-percent chance of learning something,” Gong says of the Blue Sky students. “That is what really counts.”

For information on the American Solar Challenge and updates go to http://americansolarchallenge.org/ 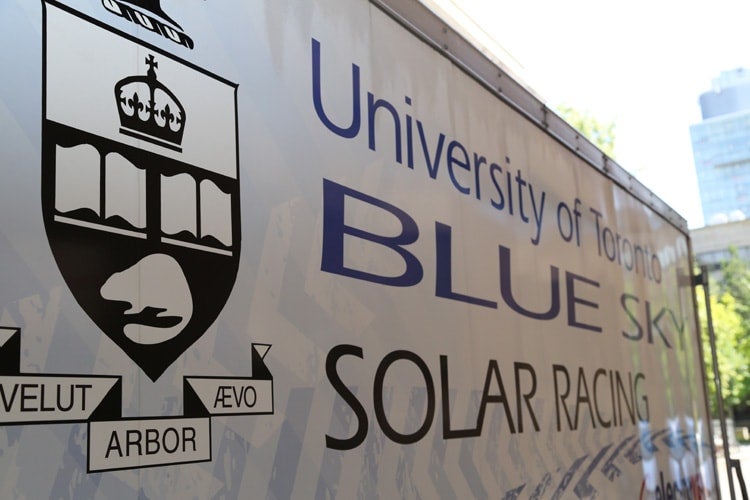