Blood test could predict who will benefit from immunotherapy, researchers find 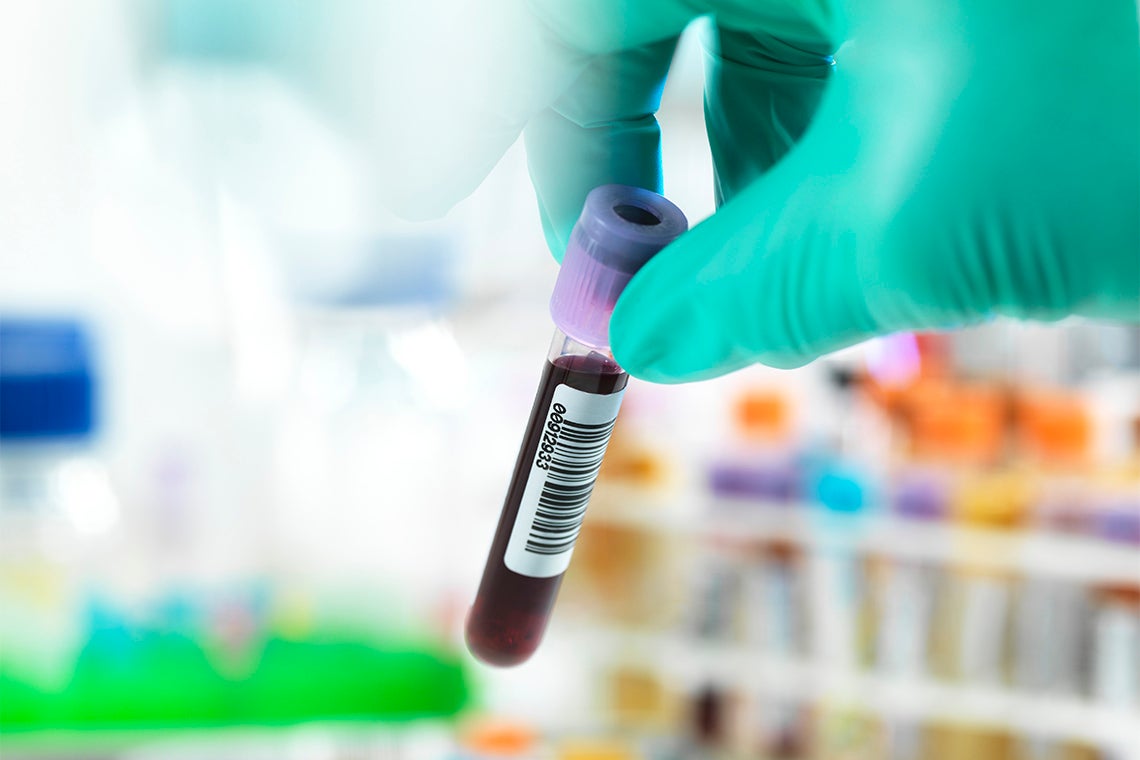 A test that detects changing levels of tumour fragments in the blood may be an easy, non-invasive and quick way to predict who will benefit from immunotherapy, University of Toronto researchers say.

Immunotherapy can shrink tumours and prolong survival for patients for whom other treatments have failed. But it only helps about 20 to 30 per cent of patients – and so far, clinicians have been unable to predict who will benefit.

Since immunotherapy can have severe side effects in a small percentage of patients, knowing whether to begin or continue would be helpful for patients weighing different treatment options.

A team of scientists and clinicians addressed this question with a novel study evaluating various cancer patients’ response to a specific immunotherapy drug using a customized test based on each patient’s tumour profile.

They found that individual response to treatment can be predicted within weeks, based on increasing or decreasing levels of DNA fragments which are shed from the tumour into the blood.

Genomic testing with powerful new technologies can detect the same genetic mutations in the fragments circulating in the blood as in the actual tumour. These fragments are called circulating DNA or ctDNA.

Specifically, the study found that a decrease in these circulating tumour DNA fragments at six to seven weeks after treatment with the immunotherapy drug pembrolizumab was associated with a beneficial response to the drug and longer survival.

The study, “Personalized circulating tumor DNA analysis as a predictive biomarker in solid tumor patients treated with pembrolizumab,” was published in Nature Cancer this week.

Dr. Lillian Siu, a professor in the department of medicine at U of T's Faculty of Medicine, senior scientist and medical oncologist at Princess Margaret Cancer Centre and BMO Chair in Precision Cancer Genomics, noted that the study is one of the first studies across a broad spectrum of tumours to show that measuring levels of ctDNA could be useful as a predictor of who responds well to immunotherapy.

“It’s like a molecular CT scan that gives us a molecular dimension, an added layer of information to know whether a tumour is growing or not,” said Siu, a co-senior author of the paper. “That’s why this is so exciting. It helps to predict early on what may happen over time. Although important, computerized tomography (CT) and other scans alone will not tell us what we need to know quickly or accurately enough.”

Dr. Scott Bratman, an associate professor of radiation oncology and medical biophysics and first author on the paper, said it may take many months to detect whether a tumour is shrinking with various imaging scans.

“New next-generation sequencing technologies can detect and measure these tiny bits of cellular debris floating in the blood stream accurately and sensitively, allowing us to pinpoint quite quickly whether the cancer is active,” said Bratman, a radiation oncologist and senior scientist at Princess Margaret.

The prospective study analyzed the change in ctDNA from 74 patients, with different types of advanced cancers, being treated with pembrolizumab.

To customize or personalize the test, all the genes from the tumour biopsy tissue of each patient were sequenced or decoded, with specific attention to the mutations that occur in cancer. These mutations ranged from dozens to tens of thousands of mutations per tissue sample, differing according to cancer type.

Sixteen genetic mutations for each patient were then selected for a specific test to be developed and customized to detect personalized ctDNA of each patient via a simple blood sample.

“When we looked at all 20,000 genes in each cancer, the range of mutations in different individuals was huge due to the many different cancer types in the study,” said Dr. Trevor Pugh. A co-senior author on the paper and an associate professor in the department of medical biophysics, he is alsoa senior scientist at Princess Margaret and director of genomics at the Ontario Institute for Cancer Research.

“The novelty is that, rather than taking a one-size-fits-all approach, we designed a personalized blood test for each person based on their own cancer’s mutation list,” Pugh said.

Of the 74 patients, 33 had a decrease in ctDNA levels from their original baseline levels to week six to seven after treatment with the drug. These patients had better treatment responses and longer survival. Even more striking was that all 12 patients who had clearance of the ctDNA to undetectable levels during treatment were still alive at a median follow-up of 25 months.

Conversely, a rise in ctDNA levels was linked to a rapid disease progression in most patients, and poor survival.

“Few studies have used a clinical biomarker across different types of cancers,” said Siu, who is also the clinical lead for the Tumor Immunotherapy Program at the Princess Margaret, adding that “the observation that ctDNA clearance during treatment and its link to long-term survival is novel and provocative, suggesting that this biological marker can have broad clinical impact.”