Between Us: U of T alumna Cailleah Scott-Grimes focuses her lens on relationships, difficult conversations 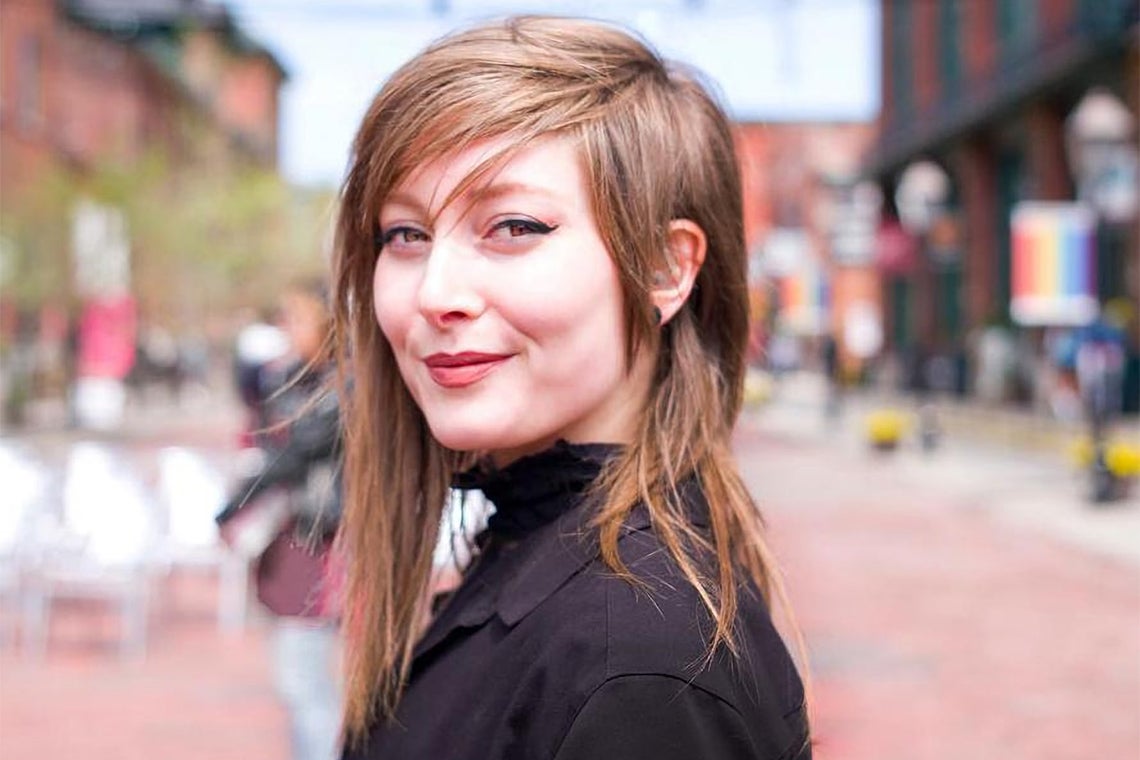 Most people snap a picture or take in the panoramic views when in the mountains. Cailleah Scott-Grimes, however, decided to shoot a short film.

The University of Toronto alumna recently screened her film, Between Us, at Toronto’s recent Inside Out film festival. The short, which won this year’s Lindalee Tracey Award at the Hot Docs Film Festival, follows Kei, a young transgender man, and his queer Canadian partner as they navigate conflicting desires in rural Japan.

Part of Scott-Grimes’s master’s thesis in York University’s film production program, Between Us was filmed in four days in the hot springs of Japan’s Yamagata mountains in November 2019. It features both the LGBTQ2S+ and seniors communities in Japan’s countryside – each important worlds for Scott-Grimes. She says it took her a long time to forge connections in Japan, but that she eventually found them within LGBTQ2S+ communities, and the trans communities specifically.

“Yamagata was where I was living and I decided to film there so I could engage with my friends in the behind the scenes of making the film and bring in new actors,” says Scott-Grimes, who was an East Asian studies (EAS) and visual studies student in U of T’s Faculty of Arts & Science. “I wanted to weave a story that would talk about the relationship between immigrants in Japan and locals living in a rural area.

“It was cool to bring together trans folks and seniors who would never normally have a chance to meet or work on a project together.”

The filming and casting processes were arduous, but Scott-Grimes says she felt strongly about the project and its story. There were extensive interviews for casting since there was a priority to cast trans and non-binary people in the lead roles. Due to a lack of representation at traditional agencies, she used word-of-mouth to find the actors she needed to tell the film’s narrative in an authentic way.

“It was one of the hardest projects I’ve ever done – for that same reason, it’s also what made it exciting. All of it was about building trust because it was the first time for them [the actors] and also a challenge for me to work in Japanese. I think it set the stage for everyone being more vulnerable and open to trying something new together.”

Scott-Grimes has been travelling to Japan for many years on various projects since her graduation from U of T in 2011. A linguaphile and art lover, she says East Asian cultures and languages were not on her radar when she began her studies at U of T.

“I’ve been an artist of various kinds for my entire life,” she says. “When I first came to U of T, I thought I would focus on the visual arts side, but because I love all these other art forms, I eventually realized that film combines all of these mediums. Specifically, I was interested in Japanese films but didn’t know much about them until taking EAS courses. They opened my eyes to Japanese visual art, contemporary painting and film, which were huge influences.”

“There was a Japanese cinema course taught by Professor Cazdyn, which was absolutely pivotal for me. His courses demonstrated different types of filmmaking approaches, some of which, like [Hirokazu] Koreeda’s films, bridge documentary and fiction to create an intimate fly-on-the-wall feeling of family life.

Scott-Grimes adds that the department provided an ideal foundation for her later work.

“I loved Arimori sensei’s classes – he was really fun and so organized,” she says. “It was a great stepping stone to being in Japan and starting to use Japanese more frequently.

“At EAS, the focus was really on staying curious and open-minded. It was allowing other people’s experiences to really shine through – for example, taking interdisciplinary approaches and not looking at things from one angle. Those things were so important to learn – a film lives and dies in your ability to collaborate.”

Her advice for new graduates? “If you’ve got an interest or passion, follow it – no matter how small or niche it may seem.”

She offers an example from her own life in which she is an a capella singer in addition to being a film maker. One day, she says, someone called her about an opportunity to film a capella concerts in Japan – a collision of her interests she never saw coming.

“Whatever your interests or talents are, somebody is out there looking for you. Think about what your strengths are and what excites you.”

For Scott-Grimes, what excites her is film and the possibilities of artistic storytelling. When asked what people should take away from Between Us, she says she hopes that audiences can think deeply about the relationships in their lives and what tough questions are not being answered.

“I see this film as asking: How do we initiate conversations that are difficult to have? We know we need to have them, but don’t know where to start. Even within the umbrella of LGBTQ2S+, there is so much variety and so many different kinds of experiences. I wanted the film to be a bridge between generations, different cultural backgrounds and identities. It’s meant to spark questions and hope.”