A better way to fly? U of T and UBC researchers study birds and their wings 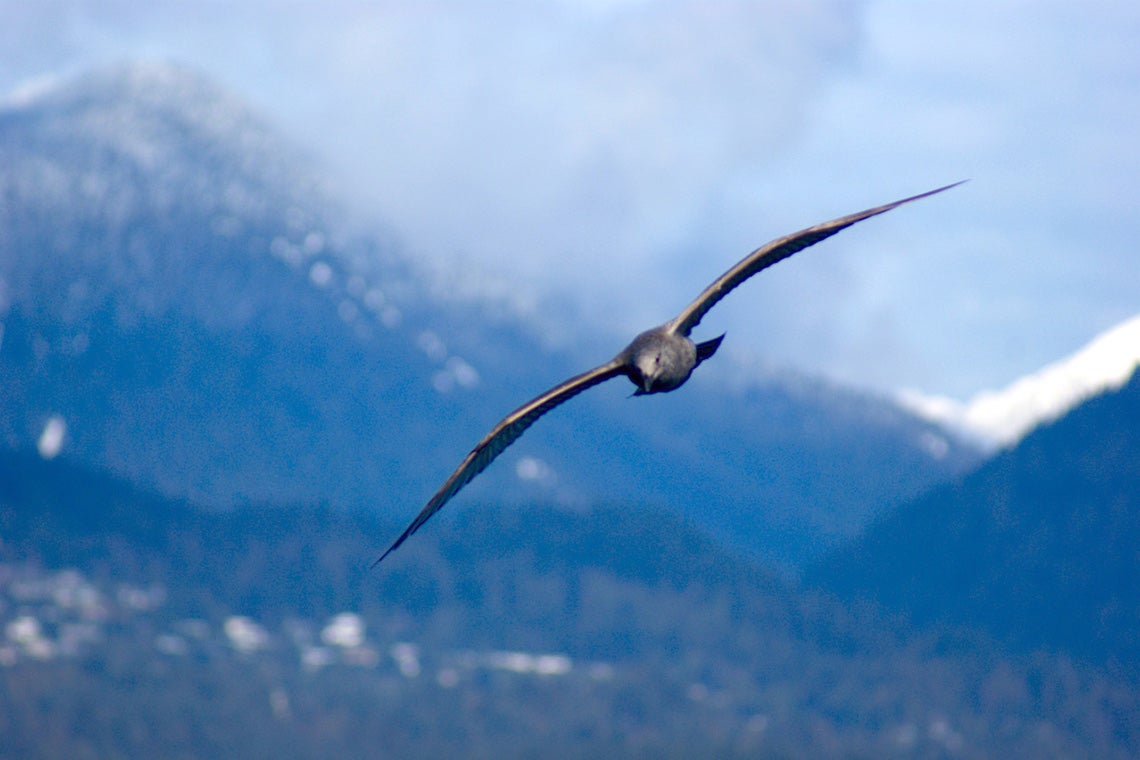 A unique collaboration between University of Toronto aviation expert Philippe Lavoie and zoologists at the University of British Columbia offers new insights into how gulls shape their wings – findings that could be used to design more efficient drones.

Although a gliding bird’s ability to stabilize its flight path is critical to its ability to produce lift, relatively few quantitative studies on avian flight stability have been completed. This is what brought UBC researchers Christina Harvey, Vikram Baliga and Professor Doug Altshuler to Lavoie’s wind tunnel lab at the University of Toronto Institute for Aerospace Studies, or UTIAS.

The researchers measured the lift and drag on 12 different wing shapes, all with slightly different elbow angles. They determined that with a simple adjustment of gulls’ elbow joints – either to expand its wings outwards or inwards – the birds are able to transition across a broad range of wing shapes to stabilize glide.

When soaring, the wings are fully extended and more planar, corresponding to increased static stability. However, in windier and gustier conditions, gulls tend to reduce their elbow angle, resulting in a more rounded wing configuration with reduced static stability.

“If you can change the shape of the wings, you can create more stable configurations with lower drag when you want more endurance,” says Lavoie, who is an associate professor in U of T’s Faculty of Applied Science & Engineering.

“Gulls can use updrafts to increase altitude so they don’t have to flap their wings as much to conserve energy. But if they need to make quick maneuvers, like diving to catch fish, they can change the shape of the wing for that particular purpose.” U of T aviation expert Philippe Lavoie envisions drones that, like birds, could coast on thermal updrafts (photo by Neil Ta)

Studying how gulls use wing shape to soar long distances and control their flight is particularly interesting to Lavoie because of the potential to inform the design of future aircraft, including fixed-wing unpiloted aerial vehicles, also known as drones.

“The benefit of morphing is that you don’t need bulky control surfaces during flight and it makes it easier to take advantage of energy harvesting through soaring,” says Lavoie.

He imagines fixed-wing drones that could coast on thermal updrafts as they scan pipelines for defects, look for signs of drought or crop disease on large farms or monitor the movements of caribou herds. Fixed-wing drones can also be used to track the extent and evolution of forest fires.

“The idea of bio-inspired research is to try and understand how nature does it, given that it had millions of years to adapt to certain conditions,” says Lavoie.

“Once we do that, we can see if there are elements that we can pluck out for our own designs.”

The researchers also stressed the benefits and importance of interdisciplinary research.

“It was a great experience to work with Professor Lavoie, whose experience and knowledge was an indispensable part of the project. Conducting the research at the UTIAS wind tunnel was a key part of the work,” said UBC's Harvey.

“I look forward to continuing to combine engineering tools and expertise with biological questions so that we can better understand avian flight.”

“It was a very fun project; it’s always nice to have these different opportunities that come out from a different field,” adds Lavoie. “It keeps things fresh, and makes you think about problems from a different angle.”