Better transportation planning? There’s an app for that from U of T – and it needs your help 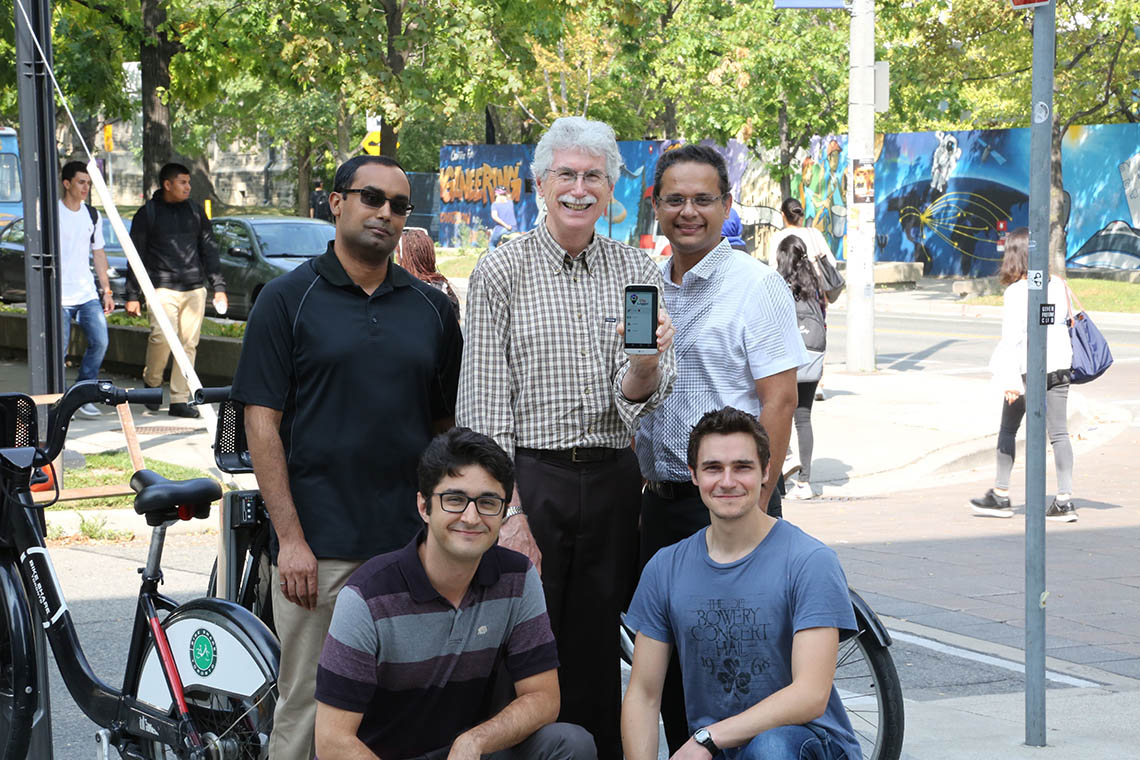 Since 1986, University of Toronto's Faculty of Applied Science & Engineering has been home to the largest database of local transportation information, used to model and plan many new projects in Toronto and the surrounding regions. Now, a new team is using the latest technology to update this critical tool for the 21st century.

“Better data leads to better planning,” says Ahmadreza Imani, a postdoctoral researcher working with Professors Eric Miller and Khandker Nurul Habib on the project. “We have great survey data that goes back three decades, but as people’s habits change, our collection methods need to change with them.”

The Transportation Tomorrow Survey (TTS) – managed for over 25 years by Professor Emeritus Gerald Steuart – gathers detailed data on the travel habits of thousands of households, representing five per cent of the region’s population: arrival times, departure times, mode of transportation, and more. The survey is run every five years and the most recent version, in 2016, gathered data on more than 850,000 trips. The results are maintained by the Data Management Group at the University of Toronto Transportation Research Institute and used to inform transportation planning by both municipal and provincial governments.

But as comprehensive as TTS has been, the team feels that it could be even better. For example, although TTS questions can be answered online, initial contact is still made through landline telephones and requests sent through the mail, an approach that misses whole segments of the population.

“Think of university students,” says Chris Harding, a PhD candidate in Miller’s lab and a member of the TTS 2.0 team. “If they are not living with their parents, or if their parents don’t have a landline, we can’t reach them. And if they live in residence, we wouldn’t have their address either.” Harding was recently involved in Student Move TO, a project that aimed to expand the TTS approach to students at Toronto’s four universities.

This summer the TTS 2.0 team piloted several new ways to reach people for the survey, including a web-based survey, partnering with employers and conducting door-to-door interviews. Their toolbox also includes a new smartphone app – called City Logger – which they hope will both increase the reach of the survey and improve the quality of data collected.

Read a CBC story about the app's launch

For example, while you may remember leaving home at about 8 a.m., the app can show that you actually left at 8:17 a.m. Apps can also better capture walking trips, which in the current TTS are only recorded for work and school trips. Harding discusses this issue in a recent paper titled "Effect of Land Use on Trip Underreporting in Montreal and Toronto’s Regional Surveys."

“If you compare the data for Toronto and Montreal, you will see that there are a lot more people walking in Montreal,” he says. “It’s not because Montrealers are more fit, it’s because the trips in Toronto are not being captured.” Missing data can make it hard to justify new infrastructure, such as bike lanes or wider sidewalks, even when they are needed.

The team has partnered with Concordia’s TRIP lab in Montreal, as well as InnoZ – the Berlin-based Innovation Centre for Mobility and Societal Change – to create City Logger. The app is free, runs quietly in the background, and does not collect any personal data such as names or phone numbers.

“It’s a powerful yet anonymous way to have your voice heard, and your transportation needs recognized,” says Harding. To sweeten the deal, the team is offering people who use the app for at least one week a chance to win gift cards for local shops and online stores.

Their goal is to get at least 1,000 downloads within eight weeks. If all goes well, the anonymized data will be put to use within weeks and will guide future data collection efforts in the region.

“We’re at an interesting moment in time, where there are many people in the system who are trying to effect change,” says Harding. “If this data can be kind of the catalyst for making things better throughout the region, that would be truly amazing.