Better-placed automated external defibrillators could save more lives, U of T study finds 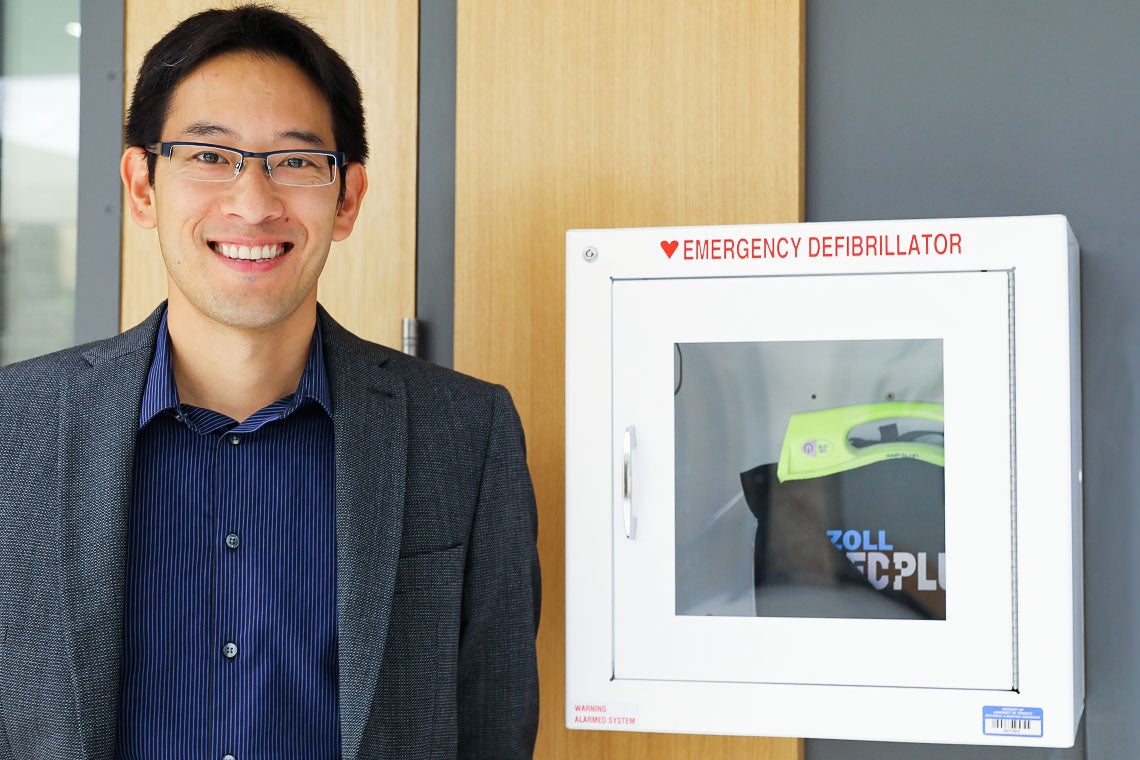 “The potential to save lives is there," says U of T's Timothy Chan about better access to automated external defibrillators (photo by Tyler Irving)

Automated external defibrillators can restart a stopped heart, but they only work if they are available where and when they are needed.

A new study led by Timothy Chan, a professor in the University of Toronto’s Faculty of Applied Science & Engineering, demonstrates how optimizing the distribution of automated external defibrillators (AEDs) could lead to significant improvements in health outcomes.

Most AEDs are currently located in office buildings or shopping malls. But these buildings tend to cluster in certain areas of a city and are usually locked after business hours. Previous work from Chan’s team created a Top 10 list of ideal spots to place AEDs, including locations such as ATMs and 24-hour coffee shops.

“We know how to increase coverage in terms of both space and time,” says Chan, director of U of T's Centre for Healthcare Engineering and the Canada Research Chair in Novel Optimization and Analytics in Health.

“The question we wanted to answer with this study was: Will that actually impact patient survival?”

Rearranging all of the AEDs across an entire city would be costly and impractical, so the team opted for an approach they describe as “the computer version of a clinical trial.”

Using more than two decades of detailed historical data on out-of-hospital cardiac arrests from the city of Copenhagen in Denmark, they were able to simulate a virtual world in which the number of AEDs was the same, but their locations had been optimized.

The simulated outcomes – such as the proportion of out-of-hospital cardiac arrests where bystanders actually used an AED, as well as the predicted 30-day patient survival rate – could then be compared with those from the real city, which acted as a control.

“Basically, what we show is that if we could go back in time and place AEDs under our optimized approach instead of how they were actually placed, the results improve,” says Chan. “To our knowledge, this is the first time a team has used this method for studying AED distribution.”

The models “learned” where to place the AEDs based on the times and locations of out-of-hospital cardiac arrests that occurred between January 1994 and September 2007. The optimized AED network was then simulated over the period of October 2007 to December 2016.

Two scenarios were simulated. In the first, AEDs could only be located in existing buildings with traditional operating hours, which increased the proportion of out-of-hospital cardiac arrests within 100 metres of a defibrillator from 22 per cent to 33.4 per cent. In the second scenario, AEDs could be located outside and were considered to be available 24 hours a day, further increasing coverage to 43.1 per cent.

For the second scenario, in which AEDs were outside and available 24/7, the results were even better: Bystander participation increased to 26.9 per cent, and predicted 30-day patient survival rose to 35.4 per cent. The results are published in the Journal of the American College of Cardiology.

“While we still need full-scale clinical trials to validate the predictions of our models, I think what they show is that it is worth making the effort to get a better distribution of AEDs,”  says Chan.

“The potential to save lives is there.”