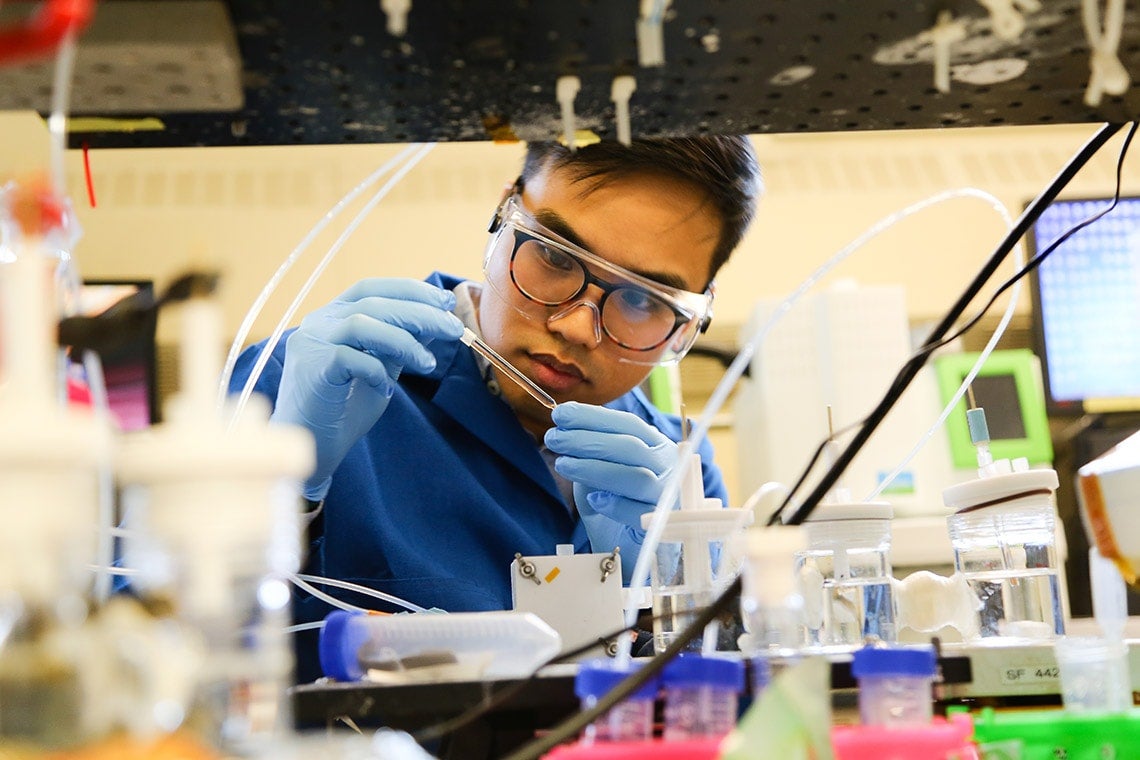 Phil De Luna is one of the lead authors of a new paper published in Nature Chemistry that reports a low-cost, highly efficient catalyst for chemical conversion of water into oxygen (photo by Tyler Irving)

A new catalyst created by University of Toronto researchers brings them one step closer to artificial photosynthesis – a system that, just like plants, would use renewable energy to convert carbon dioxide (CO2) into stored chemical energy.

By both capturing carbon emissions and storing energy from solar or wind power, the invention provides a one-two punch in the fight against climate change.

“Carbon capture and renewable energy are two promising technologies, but there are problems,” says Phil De Luna, a PhD candidate in the Faculty of Applied Science & Engineering and one of the lead authors of a paper published today in Nature Chemistry.

“Carbon capture technology is expensive, and solar and wind power are intermittent. You can use batteries to store energy, but a battery isn’t going to power an airplane across the Atlantic or heat a home all winter. For that you need fuels.”

De Luna and his co-lead authors Xueli Zheng and Bo Zhang – who conducted their work under the supervision of University Professor Ted Sargent – aim to address both challenges at once, and they are looking to nature for inspiration. They are designing an artificial system that mimics how plants and other photosynthetic organisms use sunlight to convert CO2 and water into molecules that humans can later use for fuel.

As in plants, their system consists of two linked chemical reactions: one that splits H2O into protons and oxygen gas, and another that converts CO2 into carbon monoxide, or CO. (The CO can then be converted into hydrocarbon fuels through an established industrial process called Fischer-Tropsch synthesis.)

“Over the last couple of years, our team has developed very high-performing catalysts for both the first and the second reactions,” says Zhang, who is one of the corresponding authors and is now a professor at Fudan University. “But while the second catalyst works under neutral conditions, the first catalyst requires high pH levels in order to be most active.” Researchers Xueli Zheng (left) and Bo Zhang test a previous catalyst for the artificial photosynthesis system. The new catalyst works at lower pH, leading to an improvement in the overall efficiency of the system (photo by Marit Mitchell)

That means that when the two are combined, the overall process is not as efficient as it could be, as energy is lost when moving charged particles between the two parts of the system.

The team has now overcome this problem by developing a new catalyst for the first reaction – the one that splits water into protons and oxygen gas. Unlike the previous catalyst, this one works at neutral pH, and under those conditions it performs better than any other catalyst previously reported.

“It has a low overpotential, which means less electrical energy is needed to drive the reaction forward,” says Zheng, who received his PhD at U of T and is now a postdoctoral scholar at Stanford University. “On top of that, having a catalyst that can work at the same neutral pH as the CO2 conversion reaction reduces the overall potential of the cell.”

In the paper, the team reports the overall electrical-to-chemical power conversion efficiency of the system at 64 per cent. According to De Luna, this is the highest value ever achieved for such a system, including their previous one, which only reached 54 per cent.

The new catalyst is made of nickel, iron, cobalt and phosphorus, all elements that are low-cost and pose few safety hazards. It can be synthesized at room temperature using relatively inexpensive equipment, and the team showed that it remained stable as long as they tested it, a total of 100 hours.

Armed with their improved catalyst, the Sargent lab is now working to build their artificial photosynthesis system at pilot scale. The goal is to capture CO2 from flue gas – for example, from a natural gas-burning power plant – and use the catalytic system to efficiently convert it into liquid fuels.

“We have to determine the right operating conditions: flow rate, concentration of electrolyte, electrical potential,” says De Luna. “From this point on, it’s all engineering.”

The team and their invention are semi-finalists in the NRG COSIA Carbon XPRIZE, a $20-million challenge to “develop breakthrough technologies that will convert CO₂ emissions from power plants and industrial facilities into valuable products.”

The project was the result of an international and multidisciplinary collaboration. The Canadian Light Source in Saskatchewan provided the high-energy X-rays used to probe the electronic properties of the catalyst. The Molecular Foundry at the U.S. Department of Energy’s Lawrence Berkeley National Laboratory did theoretical modelling work. Financial and in-kind support were provided by the Natural Sciences and Engineering Research Council, the Canada Foundation for Innovation, Tianjin University, Fudan University and the Beijing Light Source.

As for what has kept him motivated throughout the project, De Luna points to the opportunity to make an impact on some of society’s biggest environmental challenges.

“Seeing the rapid advancement within the field has been extremely exciting,” he says. “At every weekly or monthly conference that we have within our lab, people are smashing records left and right. There is still a lot of room to grow, but I genuinely enjoy the research, and carbon emissions are such a big deal that any improvement feels like a real accomplishment.”