Armed with 3D scanners, U of T anthropologists ready hundreds of fossils for virtual labs 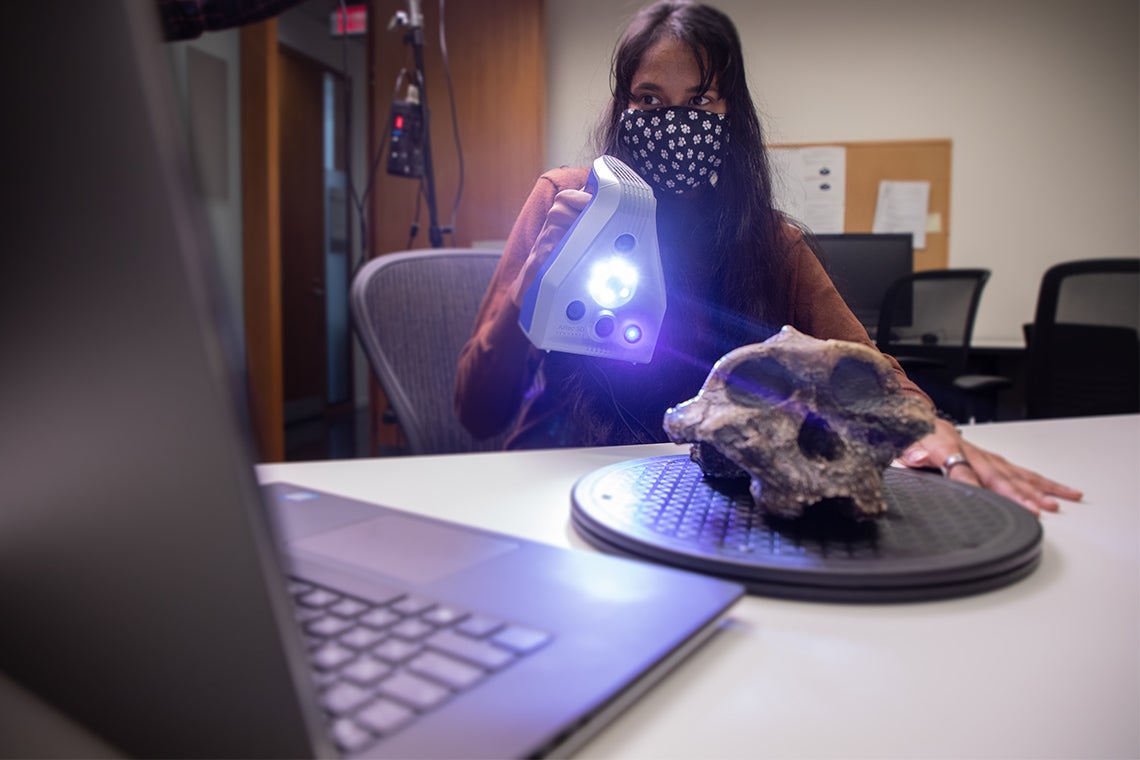 In a small room at the Terrence Donnelly Health Science Complex at the University of Toronto Mississauga, a cast of a hominin skull is carefully being scanned. Its prominent features, distinguishing characteristics and even the smallest surface details are all replicated in exacting detail as part of a project that’s bringing fossils into the digital realm.

The skull is one of hundreds of specimens being added to an online 3D digital database for anthropology students who can’t access bone casts and fossils in person due to the pandemic.

Lauren Schroeder, an assistant professor of anthropology, says knew she had to find a way to get lab specimens in the hands of her students after classes moved online. She and her TA scoured the web for resources they could use in a virtual lab, but found it difficult to find all the material in one place – and many specimens simply weren’t available.

That’s when she and her colleagues decided to create their own digital database from their teaching collection. Fortunately, U of T Mississauga’s anthropology department had recently purchased a handheld 3D scanner capable of rendering complex objects in fine detail. Her colleagues at St. George had access to one, too.

Bence Viola and Michelle Cameron, who each teach similar courses at the St. George campus where they are both assistant professors in the department of anthropology, are also scanning their teaching collections. The three colleagues are using a shared spreadsheet to track scans so they can spread the workload and avoid duplicating efforts.

“We’ve spent more than 100 hours scanning specimens already,” says Viola, whose graduate student has already scanned a full male and female skeleton, bone by bone. “It’s a significant investment, but it’s important. It’s the only way to teach this year.”

A skull is carefully scanned using a handheld 3D scanner. The process is slow because the high-resolution models need to show the smallest surface details (image by Johnny Guatto)

Viola explains that the scanning process is slow because the high-resolution models need to show the smallest surface details. While some models can be shared with a broader audience, scans of real bones and some other fossils will only be available to students.

Hundreds of specimens from U of T Mississauga’s teaching collection – mostly consisting of casts of hominin skulls and primate post-cranial material (such as leg bones) – are being scanned for Schroeder’s upcoming second year anthropology class, Biological Anthropology: Primatology and Palaeoanthropology, which starts in January.

“The course provides an overview of skeletal anatomy across multiple species of primate, including us,” Schroeder says, noting the course has a significant lab component that consists of activities using bone casts. 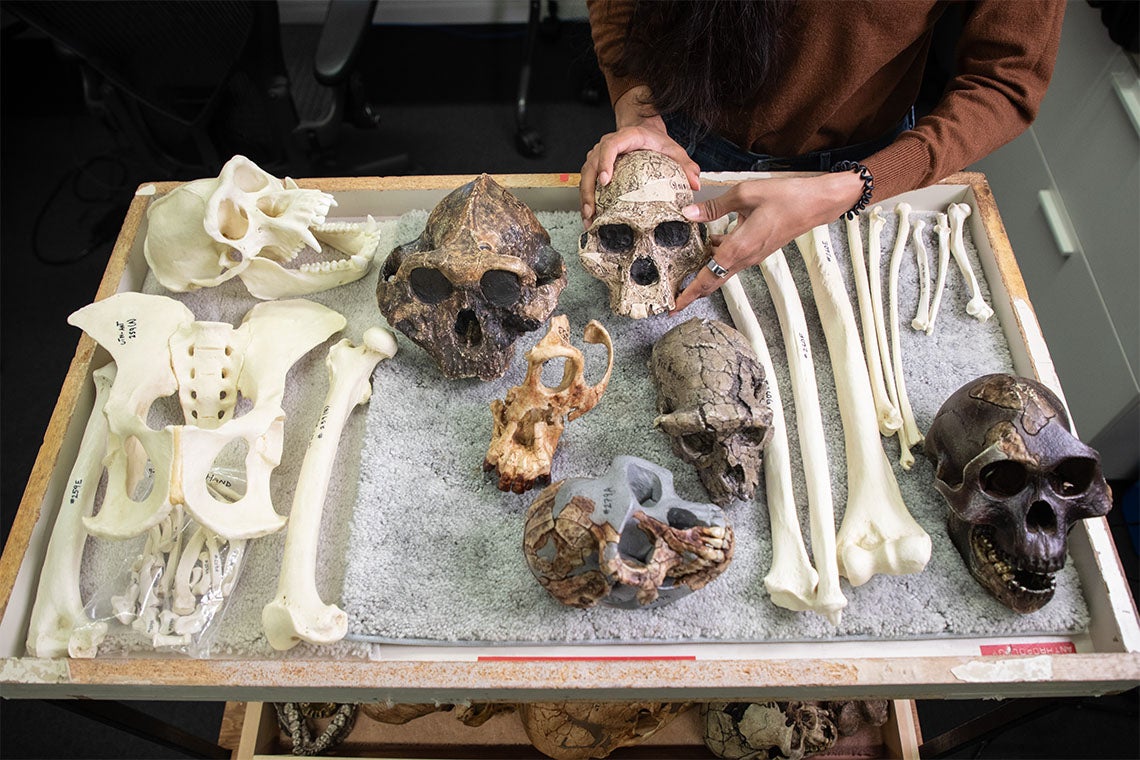 The 3D digital models imitate the casts students would normally work with during an in-person lab. Students can interact with the virtual models, turning them, zooming in on points of interest and noting surface details. The models are also annotated, drawing attention to certain features students will need to recognize.

While the pandemic spurred the project, both Schroeder and Viola see opportunities to use the newly digitized teaching collection in conjunction with hands-on learning when labs resume normal operations. Students can use the digital models for review, special assignments or even as a way to virtually take a specimen home for further study – something not possible with the real objects.

Viola refers to the database as a “virtual textbook” that is always available to students. The 3D digital models can also be used by professors for tests and exams, and even by researchers out in the field. 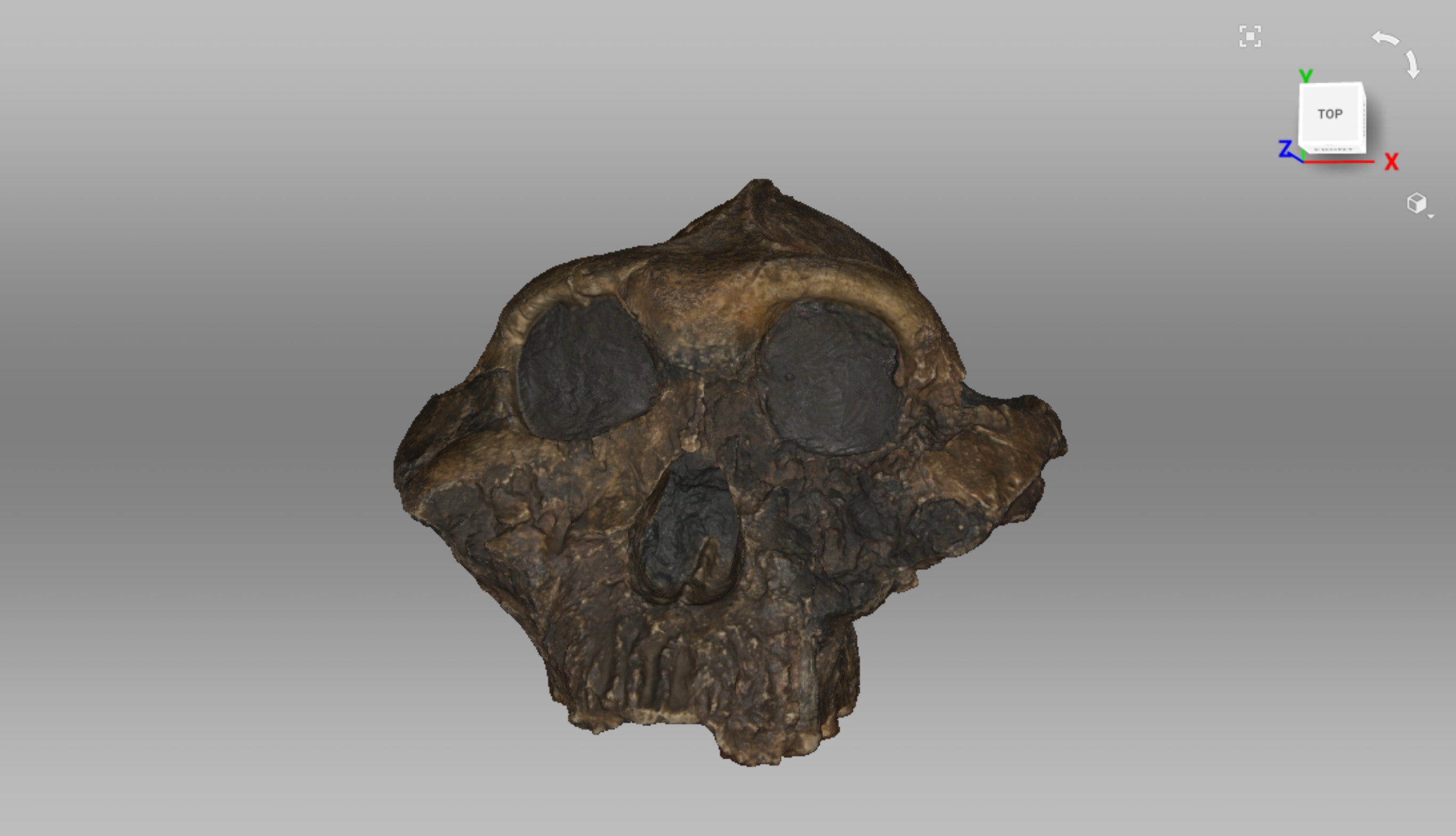 The 3D digital models imitate the casts students would normally work with during an in-person lab.

Creating a cross-campus digital collection also has the potential to broaden what students can access. Each campus offers different anthropology specializations and slightly different courses. With that comes access to some specialized collections. By creating a digitized database, specimens unique to one campus can be scanned into the system for use across the university.

“I think it’s a great opportunity for students to see what other people do and learn from experts on other campuses,” Viola says.