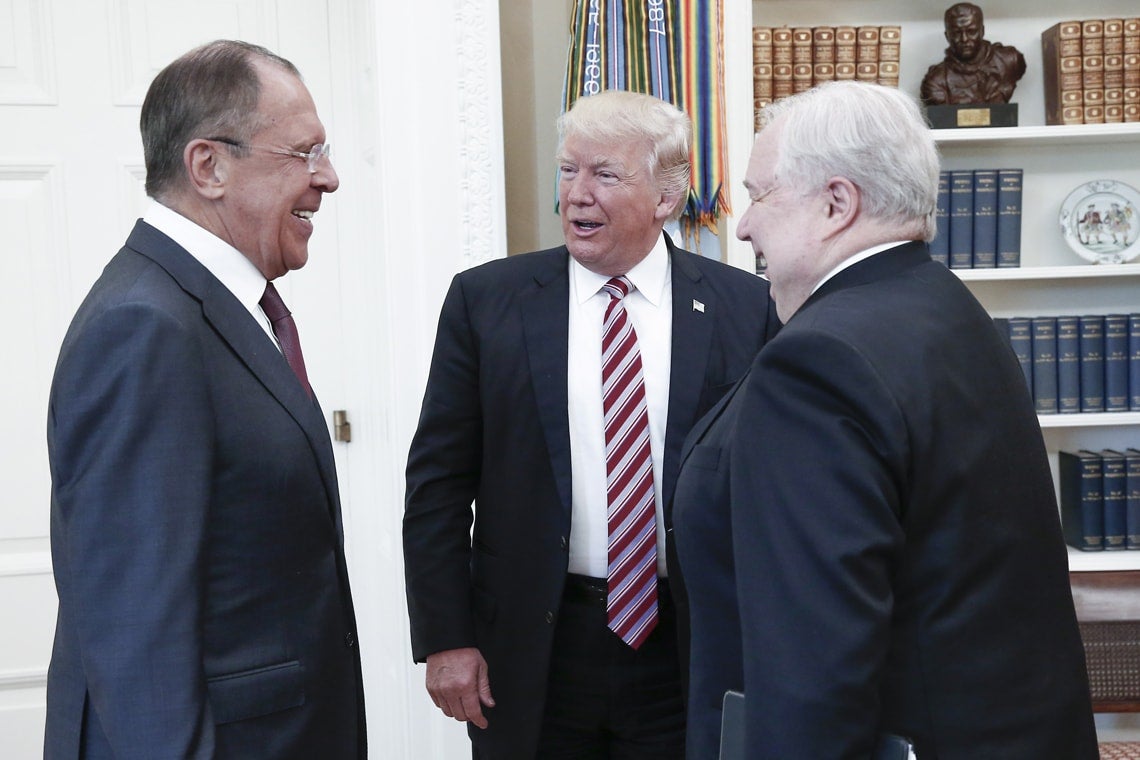 The May 10th meeting at the heart of the controversy: U.S. President Donald Trump with Russia's Foreign Minister Sergei Lavrov (left) and Russian Ambassador to the U.S. Sergei Kislyak (right) in the Oval Office (photo by Alexander Shcherbak/TASS/Getty)

He tweeted that he had the “absolute right” to share the intelligence, and that he did it for “humanitarian reasons” because he wanted Russia “to greatly step up their fight against ISIS & terrorism.”

The Russian related controversy comes on the heels of Trump's abrupt firing of FBI Director James Comey, whose agency is investigating potential ties between Russia and Trump's 2016 presidential bid. The New York Times reported Tuesday that Comey had written a memo, saying that Trump had asked him to close an investigation into Michael Flynn.

As the story continues to develop, Russian President Vladimir Putin has now offered to release a record of the meeting.

U of T News spoke with Professor Ronald Pruessen, from the department of history in the Faculty of Arts & Science and the Munk School of Global Affairs, who likened the rumblings in the Trump administration to “a Jenga tower filled with vibrating pieces, shaking constantly.”

With a small group of congressional Democrats now using the “I” word, calling for Trump's impeachment, Pruessen says it may still be early.

“To fire Comey or to flap those loose lips with the Russian ambassador and foreign minister in the Oval Office may have been stupid...but that's not the same as ‘illegal,’” Pruessen said. Is the Trump White House unravelling? Are the leaked reports over intelligence breaches a sign that there's serious dissension – a potential coup of sorts?

Something has to have been “whole” in the first place in order to unravel – and the Trump administration was never that. This is an administration that has been frazzled from the beginning – like a Jenga tower filled with vibrating pieces, shaking constantly – and we're simply (if sometimes frighteningly) seeing more of the same as the weeks go by. The key player is a spoiled and quite wicked child, aided and abetted (and sometimes used) by Conway, Bannon, Sessions, and others: an Addams Family without any of the cartoon charm.

A full-fledged collapse or implosion may be in the cards – in the House of Cards – if Trump doesn't learn and/or grow up – or if others don't figure out how to restrain him.  But not quite yet.

Based on the history of U.S. presidents getting impeached, is there enough now for an impeachment?

It's not hard to imagine the possibility of impeachment with Trump, but my sense is that we're not really there yet.

It took years for the evidence and the will to mount before the Nixon impeachment possibility was credible or operational. We've had barely a 100 days with Trump. Republicans are still too attached to their president.  The case(s) against Trump are also still somewhat debatable on the basis of available evidence: to fire Comey or to flap those loose lips with the Russian ambassador and foreign minister in the Oval Office may have been stupid, for example, but that's not the same as “illegal.”

Give Trump enough time – or enough rope – and he just might seal the deal (as he does love to do). On the basis of what we've seen, who could seriously rule out an accumulation of egregious abuses of power – or brazen business/financial machinations?

What's your opinion of the extent of Russian meddling in the election and Trump's relationship with Russia – how much is he sharing?

Putin and company are capable of their own outrageous and outlandish behaviour, of course – inflicting severe consequences on their victims.  The Moscow crew, however, is from the leadership gene pool that brought the world both a decaying czarist autocracy and an imploding/collapsing Soviet Union. Can they really muster the capacity to disrupt or bring down the United States – even if they want to? Americans (and not only Trump, by any means) are far more likely to do that to themselves without needing any outside provocations.

That said, we clearly need to wait and see what other evidence emerges about Russian intentions and actions – and about Trump's culpability.