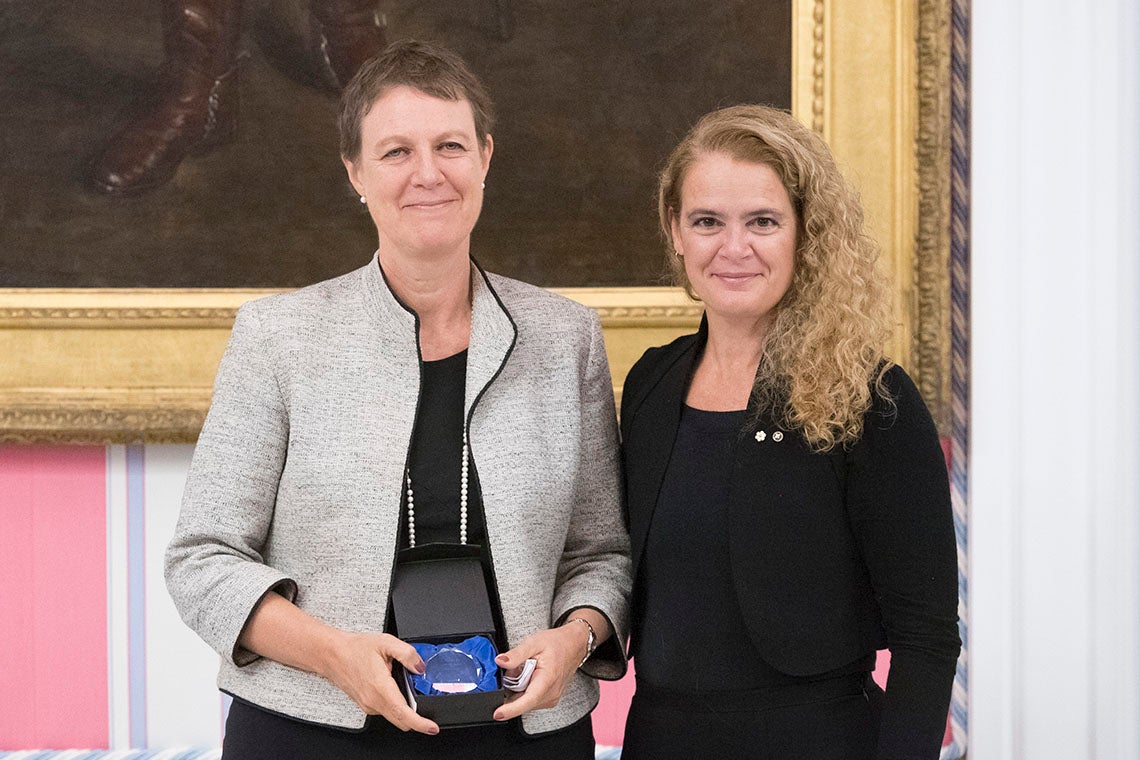 Tania Li, the first U of T researcher to receive the SSHRC Insight Award, is presented the award by Governor-General Julie Payette in Ottawa on Wednesday (photo by Sgt. Johanie Maheu, Rideau Hall)

Tania Li, an anthropologist whose research for the past two decades has been focused on Indigenous highland communities in Indonesia, has received the prestigious 2018 Insight Award from the Social Sciences and Humanities Research Council of Canada (SSHRC).

Announced Wednesday among the council’s annual Impact Awards, the prize recognizes outstanding achievement arising from a SSHRC-supported research project that significantly contributes to knowledge and understanding about people, societies and the world.

Li, a University Professor in the department of anthropology at the Faculty of Arts & Science, is the first U of T researcher to receive the Insight Award.

“I am honoured to be chosen for this award and am grateful for this recognition of my efforts to translate my work into advocacy and policy,” says Li. “This award will enable me to do more of that.”

Two other U of T researchers were finalists for other Impact Awards. Jack Quarter, a professor at U of T's Ontario Institute for Studies In Education, was a finalist for the SSHRC Partnership Award for his work on Canada’s social economy and bridging the gap between universities and other communities. Kinnon MacKinnon, a PhD candidate at the Dalla Lana School of Public Health, was a finalist for the Talent Award for his research on the barriers to mental health care services experienced by transgender, transsexual and transitioned persons.

“The University of Toronto is extremely proud of these three researchers for their strong showing in this prestigious competition,” said Vivek Goel, U of T's vice-president of research and innovation. “Their work is rooted in partnerships with communities and has made significant contributions to their fields of study and the lives of those they are working with in their research.” As for Li, she received SSHRC support for her “Poverty and Wealth in Indonesia’s New Rural Economies” project from 2009 to 2012. She and her research team closely examined the nature and outcomes of rural land transformation on the Indonesian islands of Sulawesi and Kalimantan, where human and industry interactions with the environment have changed landscapes and livelihoods in fundamental ways. Sulawesi was hit hard by Friday’s devastating earthquake and tsunami in Indonesia.

Li continues to visit her two research sites for periods of two to 12 weeks most years, to track ongoing changes in real time. Her findings challenge the idea that high market value agriculture brings uniform development benefits for residents. Through her work, she demonstrates how the prevalent development model is failing to address endemic poverty.

A longtime associate of the Asian Institute at U of T, Li has led investigations of the dynamic changes resulting from attempts to spur economic growth, either by shifting from subsistence farming to high-growth export crops or the establishment of plantations by foreign or domestic corporations. Her work shows that high growth does indeed create wealth, but it creates new forms of poverty as well.

In her study sites, people who were not previously poor became so when they lost access to land and wage work was scarce or poorly paid. Highlighting these uneven results has resonance in many parts of the world where a period of high growth has been accompanied by rising inequality, sluggish job creation, lagging wages, and new forms of impoverishment. As very few scholars have had the opportunity to study the plantation world up close, policy-makers and advocacy organizations in several continents have begun to engage with Li’s findings. She has spoken before the European Parliament, the World Bank in Jakarta and Washington, and the former Canadian International Development Agency, and has conducted training sessions with multiple NGOs and policy-makers. Her work has also been taken up in China, where a half a billion rural inhabitants could be unevenly impacted by the government’s current growth-oriented rural development model.

“Our approach has been to identify the mechanisms that produce new poverty and explain precisely how this takes place,” says Li. “There are a number of things that could be done differently with regards to economic development to ensure that that prosperity is more evenly distributed. It is our job as researchers and scholars to provide the evidence that governments and other agencies can use when developing policies that promote development.

“Incisive research can also support advocates for human rights, labour rights, Indigenous rights and the people working on the frontlines of mobilization,” she says. “Many people benefit from the status quo so it will not change without effective pressure.”