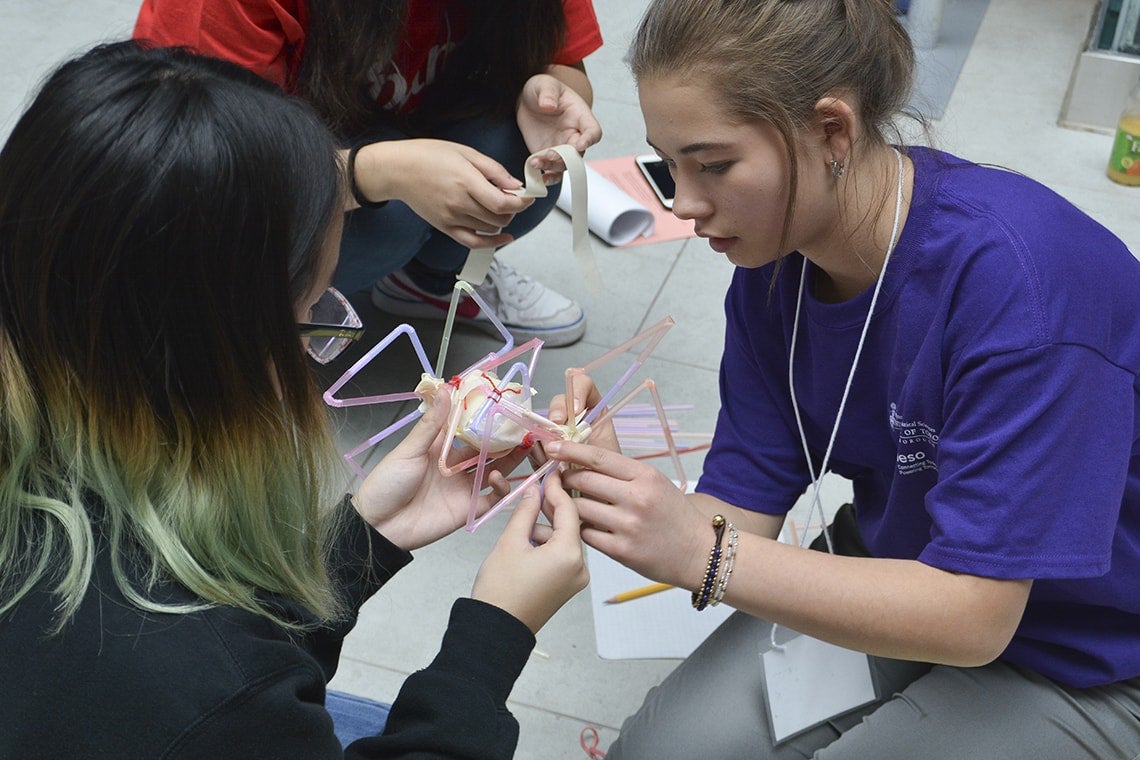 A second-year human biology and neuroscience student at U of T Scarborough, Sithamparanathan says her parents valued a math education. She also worked as a math tutor to fellow students in Sri Lanka where she grew up.

So when her first-year calculus instructor Sophie Chrysostomou asked her to volunteer with Math in Motion…Girls in Gear! an annual event aimed at inspiring young girls to pursue science, technology, engineering and math (STEM) programs at the post-secondary level, she didn’t hesitate.

“These girls are at a critical time in their lives when it comes to what they want to pursue academically. They may be interested in math, but they really need that extra encouragement to really go for it,” says Sithamparanathan, who also helped plan this year’s event.

Nearly 100 Grade 9 girls from the Durham, York and Toronto school boards took part in this year’s event at U of T Scarborough on Nov. 26. The event included interactive math demonstrations and fun activities like the “egg drop” engineering design challenge.

“It’s amazing to see these mini-engineers come up such creative designs,” says Sithamparanathan.

Chrysostomou, an associate professor, teaching stream, in the department of computer and mathematical sciences at U of T Scarborough, organized the event.

“A big part of what we do is addressing some of the negative stereotypes about girls studying math,” says Chrysostomou. “We do this by introducing girls to women who have careers in STEM-related fields and to show them they can have successful and meaningful careers if they stick with math.”

Math in Motion has deep ties to U of T Scarborough. Judy Shanks, a high school math teacher in Pickering, helped organize the first event in 2004 and is a former student of Chrysostomou.

Shanks points to recent studies that show only 22 per cent of girls with high school math marks in the 80 to 89 per cent range choose STEM programs compared to 52 per cent of boys with equivalent marks.

She says it’s “disheartening” to see girls in high school with immense talent for math not pursuing STEM programs at the university level. She hopes more girls can feel empowered to pursue these programs by having strong role models to look up to.

Since its inception more than 1,200 girls have taken part in the program. This year’s event was sponsored by Google, Canadian Mathematical Society (CMS), the Independent Electricity System Operator (IESO), the Scarborough Association of Mathematics Education (SAME) and U of T Scarborough. It also included presentations and keynote addresses from women with careers in various STEM-related fields.

“STEM is such a large field, and the skills you learn can be transferred across a range of different disciplines and jobs,” says Sithamparanathan.

“I think parents play a crucial role in encouraging young girls but so does mentorship. If these girls have someone to look up to, it can make all the difference.”