André Picard to biomedical researchers: do a better job of making your case 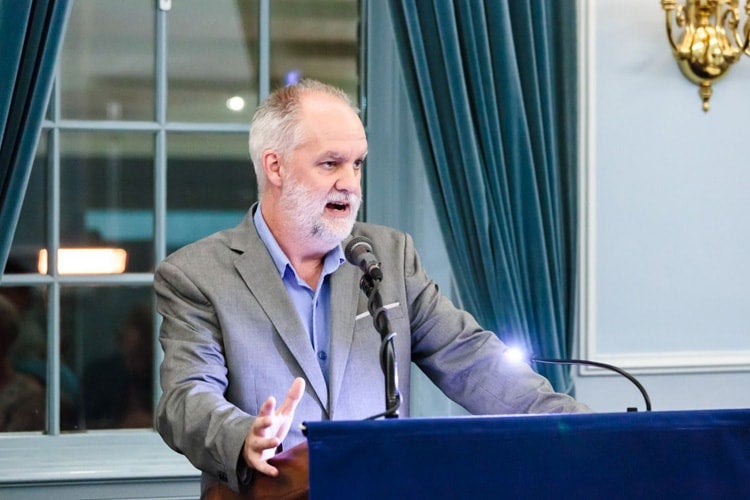 “Too much of what you do is a mystery to people,” The Globe and Mail's public health reporter André Picard told an audience of University of Toronto scientists.

“You can’t expect people to embrace the notion that investing in biomedical research is a good thing, if they don’t see the practical outcomes of research in their everyday lives.”

At a dinner celebrating the 25th anniversary of the department of biochemistry’s George Connell Lectureship, Picard spoke about the future of biomedical research in Canada, Recognizing the increased difficulties in securing research funding, he admitted he might not provide any satisfactory answers.

“In journalism we specialize at shining the light on problems and don’t do anything about solutions, unfortunately.”

But Picard emphasized the importance of communicating the value of science and criticized what he sees as the increasingly partisan and industry-focused nature of government investment in science.

“The greatest innovations in science are almost always through serendipity,” he said. “We need to create an environment in which ideas can flourish — to give scientists the time and the money to study problems, and the freedom to find solutions.”

This realm of ideas and problem-solving was on display at the George Connell Lectureship — a tribute to the esteemed biochemistry professor and former U of T president, who made countless contributions to science, both as a researcher and as an administrator. Professor Connell died in 2015.

The 2016 Connell Lecturer was Molecular Genetics Professor Stephen Scherer, who delved into the genetics and molecular imbalances in autism and related disorders. This cross-fertilization reflects an increasing focus on scientific collaboration that reaches beyond departmental boundaries.

“Nothing would please George more than these fascinating lectures,” said Sheila Connell, the wife of late Professor George Connell. Much of Professor Connell’s family attended the event — including three of his children, Thomas, Caroline, and Meg, as well as members of their families.

“He was a fundamental scientist at the leading edge of the field, and his work is still cited to this day,” said Biochemistry Department Chair Justin Nodwell. “As the linchpin event of this department, this is a fitting tribute to Dr. Connell.”

Balancing out the worrying trends in biomedical research described by Picard, Nodwell spoke optimistically about how scientists from biochemistry, molecular genetics and laboratory medicine and pathobiology are preparing to move into a new collaborative and open-concept research space in the West Tower of MaRS this fall.

“Countless big discoveries have come from the interfaces between disciplines,” he said. “We’re bringing together top minds in infectious diseases on one floor and in genetic models of disease on another. While we’ve been working together over the past years, this is the first time we’ll be interacting with such high frequency.”

And perhaps this increased integration will serve to find answers, and to demonstrate just how valuable biomedical research is to society.