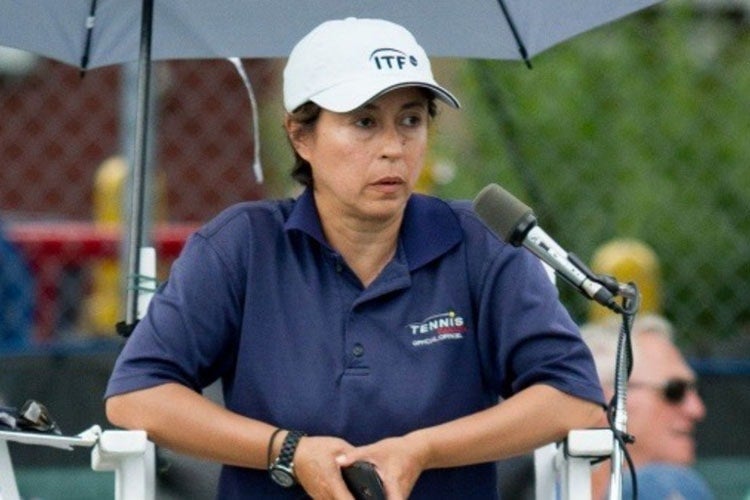 When the world’s top tennis players hit the Olympic courts in Rio this summer, the University of Toronto Mississauga’s Alison Dias will be courtside keeping her eye on the ball.

Dias, who is a graphic artist with Information & Instructional Technology Services, is one of two Canadian technical officials who will call the tennis matches at the upcoming Summer Games. She beat out more than 600 applicants to snag one of 80 spots with the Olympic officiating team. As a lines official, Dias will call the ball in or out and assist the chair umpire for men’s and women’s singles, doubles and mixed doubles matches.

Dias, who has been involved with the sport for 23 years, is one of a handful of Canadians qualified to chair international tennis matches. She got her start on the tennis circuit as a photographer at the du Maurier Open (now known as the Rogers Cup). She liked being close to the game but wanted to ditch the heavy equipment. “The court officials looked like they were having fun,” she says. “I took a course and a few weeks later, I was on the court as an official.”

Dias has become one of Canada’s top tennis officials, dedicating much of her spare time to her work with the sport. She has officiated matches across Canada, the Bahamas and at the 2012 Paralympics competition in London, and was an assistant referee at the 2015 PanAm Games in Toronto. Dias also trains new officials and is the provincial coordinator for Tennis Canada, managing about 150 tennis umpires across Ontario. Her off-court expertise was recognized with the Excellence Award in 2013.

“I like to see players develop, from being very young to teenagers to professional players,” she says. “As an official, I’ve helped to develop their behavior and discipline.”

Dias brings a sharp eye and long experience to the court, where a typical serve can travel 140 km per hour and the swing of a racquet might reach 70 to 100 km per hour. “It goes much faster than it might seem on television,” she says. “It’s all about putting your eye in the right position at the right time and watching that line to see where the ball will land.”

The high profile of the Games doesn’t faze her. “When you have to make a tough call, your instincts kick in,” she says. “If the player wants to complain, they can complain. You know when you’re right. I’ll have my experience behind me to make those tough calls.”

The Olympics will be Dias’ last big tournament as a courtside official. After five years as a chair umpire, she is training to become a referee, learning how to create match schedules, resolve player issues and supervise rule interpretations. “I’m ready to make the change, and the hands-on aspect appeals to me,” she says. “I’m always looking to learn and grow.”