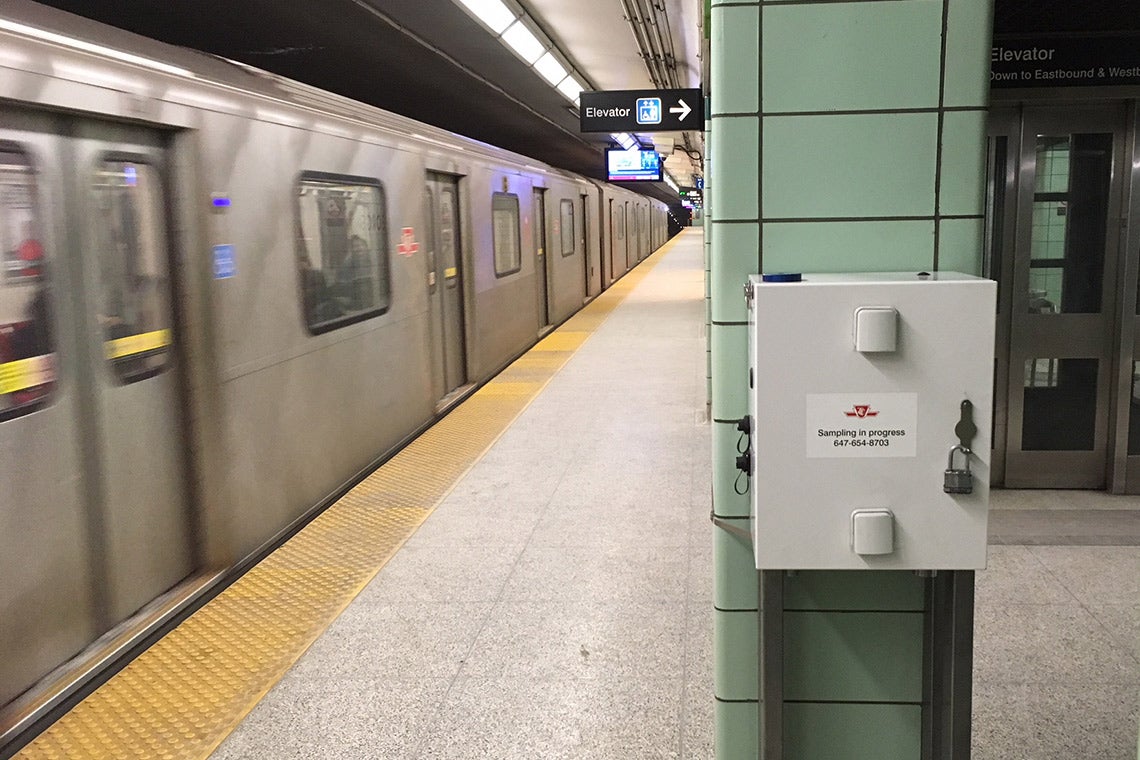 Air quality on Toronto subway platforms improved substantially with the rollout of new cars on Line 1, according to a new study by the University of Toronto’s Faculty of Applied Science & Engineering and Health Canada.

The researchers measured levels of fine particulate matter – the mass of tiny airborne particles smaller than 2.5 micrometres (known as PM2.5) per cubic metre of air – on subway platforms, as well as inside the trains. They compared levels of PM2.5 from 2010-2011 against levels measured in 2018-2020, which is after the adoption of more modern subway cars for Line 1.

The results show that air quality on an average Toronto subway platform is better than PM2.5 levels measured in the New York City and Boston subway systems, but not better than systems in Washington D.C., or Philadelphia. Concentrations varied across platforms within the Toronto system as well, with better air quality in those partially open to the outside such as Victoria Park Station.

The research team includes U of T Engineering Professor Greg Evans and Health Canada researcher Keith Van Ryswyk, who has been studying air quality in subway systems for over 10 years and is now completing a PhD in U of T’s department of chemical engineering and applied chemistry in the Faculty of Applied Science & Engineering. Their work was recently published in the journal Environmental Science & Technology.

The team found that PM2.5 levels on Toronto’s Line 1 platforms decreased by about 30 per cent and that levels inside Line 1 trains dropped by about 50 per cent compared to 2010-2011 levels. The finding is likely due to the switch to newer trains.

“The good news here is that air quality inside the trains, where people are spending more of their time, has improved and is much better than out on the platform,” says Evans, who also serves as director of the Southern Ontario Centre for Atmospheric Aerosol Research.

On Toronto’s Line 2, by contrast, where the new trains have not yet been rolled out, the results were more mixed. The researchers initially observed an increase in the levels of PM2.5 by almost 50 per cent on the platform and 13 per cent inside the Line 2 subway cars compared to 2010-2011. The cause of the increase was identified as being related to brake dust, with subsequent changes in braking patterns after 2018 corresponding to PM2.5 levels below those measured in 2010-2011.

The researchers also compared PM2.5 in newly built subway stations against older stations to see whether dust built up over the decades was a factor. They observed that it didn’t take long for the air in new stations to become like the old ones — indicating that legacy dust was not an issue, and that new dust from braking materials and behaviour were likely the two biggest contributors to air quality levels.

The composition of the airborne particles inside Toronto Transit Commission stations and trains also provided a clue as to their origins: they’re high in certain metals, such as barium and iron oxides, suggesting that they’re likely thrown off by the trains’ friction brakes – more so on the older model subway cars.

“What we’re seeing is that both the designs of the trains, and patterns of subway operation are contributing factors,” says Evans. “This points to opportunities to further improve air quality.”

“The health and safety of our customers and our employees has always been and continues to be a top priority for the TTC. The latest data are a positive indicator that the investment we’ve made is paying dividends in terms of improving air quality,” said Betty Hasserjian, acting chief safety officer of the TTC. “The TTC is committed to continuing to improve air quality across its system, through monitoring and implementing lessons learned.”

“This study involved long-term PM2.5 monitoring on a large sample of subway platforms,” says Van Ryswyk. “The resulting dataset is a wealth of data that has taught us a great deal about the nature of subway air pollution.”