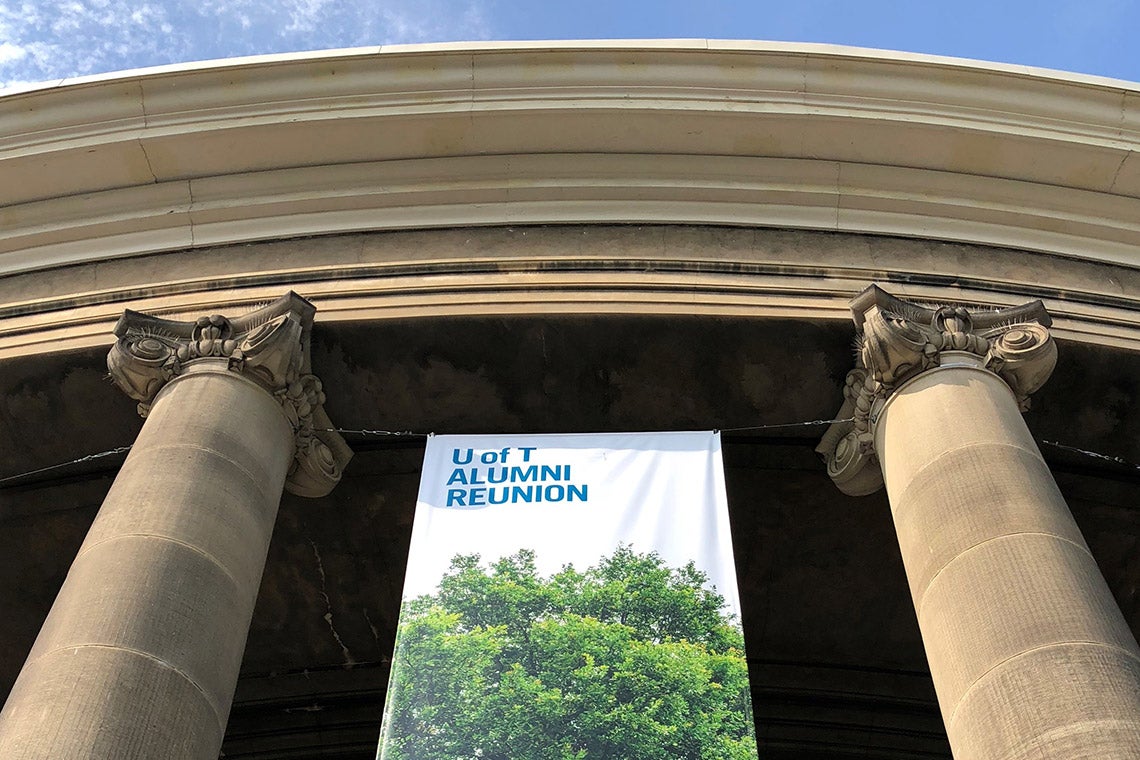 U of T's Alumni Reunion, the largest gathering of alumni, friends and family of the year, features "stress-free degree" lectures and panels on a variety of topics (photo by Kimberly Lyn)

Beneath all the breathless chatter about modern video games lies a much older truth, according to Felan Parker, a University of Toronto assistant professor of Book and Media Studies at St. Michael’s College.

“The games we play are foundational to human experience,” he says.

“We learn through play and, as some scholars have pointed out, games may well pre-date stories in human society as a way of expressing ourselves.”

Parker will expound on video games in society as part of a series of thought-provoking “stress-free degree” lectures and panels at this year’s Alumni Reunion – the largest gathering of U of T alumni, friends and family of the year.

The talks are just a few of the events at the weekend reunion, which runs May 29 to June 2. Others range from the SHAKER for young alumni at Ripley’s Aquarium (19+), to the LGBTQ+ Spring Soirée, a barbeque and bus tour of the campus, as well as the popular Kids' Passport to U of T, which allows children aged four to 12 to explore science, theatre and sports through an array of hands-on programs.

The lineup of intriguing talks by U of T experts also include lectures on smart dogs, feminism in film, the mysterious geography of sex, micro-plastics in the environment and deep brain electrodes that could help people living with depression.

“Alumni Reunion is about renewing friendships and reflection,” says Barbara Dick, U of T’s assistant vice-president of alumni relations.  “But it’s also about making new connections and celebrating the impact of our worldwide community of alumni.

“Alumni can still learn so much at U of T.  You can still be a student, and you can invite your family and friends to be there with you.”

Parker’s video game talk will focus on examples such as Fortnite, which he says is the most popular video game in the world right now.

Fortnite is bigger than the game itself, says Parker. While it doesn’t have much of a storyline or impressive graphics, players create memes about it and even have their own lingua franca. More than anything, it’s a social space, like hanging out at the mall, he says.

“Everybody isn’t necessarily going there because of what’s there, but because that’s where your friends are, or where the cool kids are.”

Streaming and spectator play – games that players find fun to watch others play – are among the other major trends. The big games of the future will be the ones that tap into the “secondary culture” around the game, Parker predicts.

But he doesn’t see much real substance in the hype around virtual reality and video games.

Video games are marketed to appeal to a “utopian dream” about becoming totally immersed in a virtual world, says Parker, “but I don’t think we’re going to be stepping on to the holodeck anytime soon.”

Compared to video games, predictions about the future of artificial intelligence and its impact on fields such as health care seem even more far-reaching, as a panel of U of T researchers and clinicians will explore as part of the weekend’s events.

Globe and Mail science reporter Ivan Semeniuk will moderate the AI and Health Care panel. Speakers include: Muhammad Mamdani, a scientist at the Keenan Research Centre at St. Michael’s Hospital’s Li Ka Shing Knowledge Institute, and a professor at U of T’s Institute of Health Policy, Management and Evaluation; Pascal Tyrrell, an assistant professor in the department of medical imaging; Anna Goldenberg, an associate professor of computer science and a senior scientist at SickKids Research Institute; and PhD candidate Felipe Morgado.

Each researcher will describe their own work as they showcase the U of T Faculty of Medicine’s leading role in AI and how it could change health care as we know it. The panel will be followed by a Q&A with the audience.

“AI is not going to replace existing health care professionals, but it is going to augment what they do,” says Tyrrell, who is also the chief science officer for AceAge, a medical device tech company start-up.

“The way people should perceive it is not so much artificial intelligence but augmented intelligence.”

There is no doubt AI is a disruptive technology in medicine but everything takes time to implement, he adds.

“As you incorporate AI, the job and the profession changes with it. It allows you to do more in less time, but it can’t replace the human insights and professional experience that machines don’t have.”