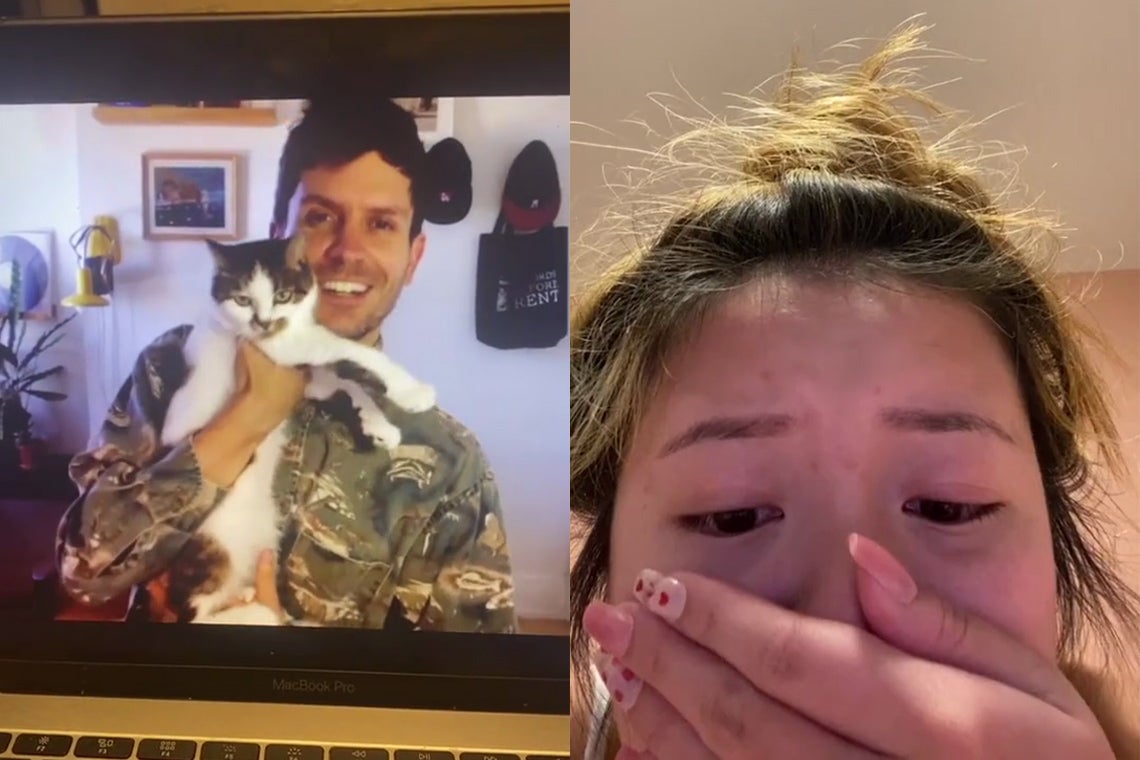 In a viral TikTok video, Assistant Professor Adam Hammond (left) wishes his cat Wendy a happy 10th birthday prior to one of his online lectures – a gesture that causes student Samantha Chan (right) to be overcome with emotion (images via TikTok)

The University of Toronto’s Adam Hammond has an unusual achievement to add to his resume: co-starring in a viral cat video.

The assistant professor in the department of English in the Faculty of Arts & Science recently appeared in a TikTok video that racked up hundreds of thousands of views and likes on social media.

Shot and posted by student Samantha Chan, the video shows Hammond – appearing on the screen of Chan’s laptop – kicking off one of his online lectures by introducing students to his cat Wendy, which was celebrating its 10th birthday. Chan, meanwhile, can be seen teary-eyed and covering her mouth.

“I was trying to share this pure moment with my friends on TikTok,” says Chan, a second-year student in the life science program and a member of University College. “This was so unexpected. The TikTok was made to tell everyone that professors are human, too – they are trying to adjust to the new changes and sometimes they share adorable moments to help us adapt.”

The video has struck a chord since it was first posted on Oct. 17. Offering a lighthearted moment in an otherwise challenging year, it has received more than 734,000 views, 200,000 likes, and 5,300 shares and counting.

“It’s fantastic. I think it's wonderful,” says Hammond. “I've seen it and it's touching and very human, which I think is such a nice element these days.”

Even so, Hammond remains perplexed at the video’s popularity.

“Is it that my cat is cute? Is it the student’s reaction? Is it the weird shirt I'm wearing? I needed to figure it out, so I asked my former students who use TikTok,” he says.

“One student said, ‘Here's the deal: she represents your average student who is going to yet another online class and is feeling isolated and shut in her room. And then out of nowhere, comes this extremely sweet moment where the barriers are lowered. She can relate to it personally and feels a moment of joy in this really unexpected way. And so the floodgates go down and she overreacts to what is a very simple moment.’”

That made perfect sense to Hammond. “People can feel cut off by online learning – you're really missing the human element. So I'm doing everything I can to try to make it a personal experience.”

For Hammond, that includes tours of his living space and showing his students how he’s is coping under difficult conditions.

“I think a lot of students wonder what professors do after class. They can't imagine it – but we’re at home, too,” he says. “When we went into lockdown, I invited the students over to my house for an end-of-term virtual party and it was like a barrier broke down. They got to see me and my natural environment.”

Hammond also breaks up his online lectures with what he calls “cute breaks,” which involve everything from visits by Wendy to glimpses into other aspects of his day-to-day life.

“I would talk about a record I was into or a movie I'd seen just to make it more human and to break down the hierarchy a little,” he says. “I’m just trying to keep in mind what students are going through.”

For his larger classes, Hammond provides some pre-recorded lectures, but also hosts live interactive tutorials that give him the opportunity to get to know his students – something he wouldn’t be able to do on campus.

“It’s not the best circumstances, but I can be a bit more creative in terms of the ways I do things,” he says. “Under normal circumstances, I'd have to get separate rooms for these smaller tutorials, and it just wouldn't be possible logistically.

“We're all in this together. For better or worse, I’m one of their friends now that they're talking to regularly and I try to approach the job in that way.”

As for Chan, she hopes the TikTok video continues to spread its message of empathy for both instructors and students.

“I hope other students can understand that everyone, including our instructors, is struggling through these trying times,” she says.

“Simply turning on your camera during lectures, reacting to questions with a thumbs up or down, having a fun green screenand engaging with your peers and professors can brighten up their day.”