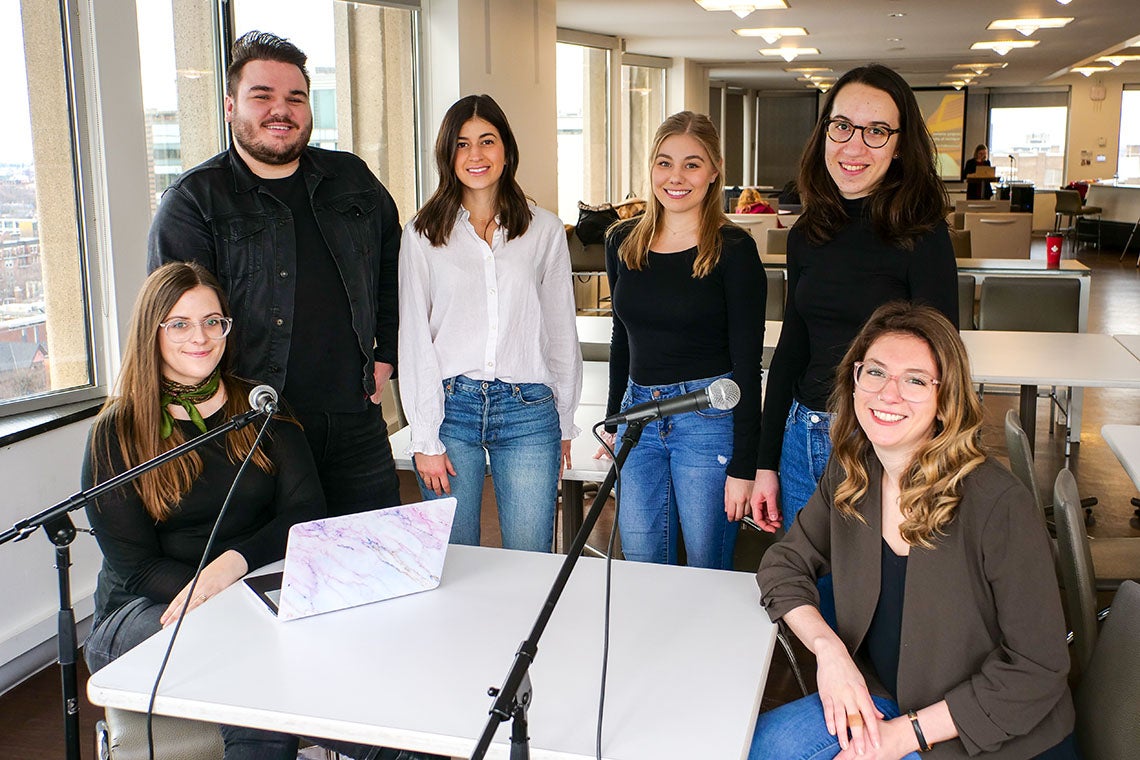 On the second floor of the University of Toronto building that houses the Ontario Institute for Studies in Education (OISE), inside one of the larger library study rooms, a small group of PhD students are hard at work. But they’re not exactly studying.

Wires surround them, microphones are tested and ready. The six-person team, a newly-assembled production crew, are preparing to produce their next episode of the “Accidental Intellectual” podcast, which typically features conversations about success and setbacks with U of T students and faculty.

Launched this fall by co-host Lee Propp, the podcast set out to personalize health care with the tagline “humans behind the experts.” Seeking out movers and shakers in the health-care space, the team wanted to show a side of an academic that is rarely seen – something beyond their ideas and their contributions to society.

“We’ve heard from a number of the interviews we’ve done already that breaking down that wall of the dispassionate, far-removed clinician is the key to connecting with patients and clients [and] conveying empathy, which are all really important to being a good clinician,” says Propp, a PhD student in the school and clinical child psychology program.

From Jeffrey Ansloos, an assistant professor in OISE’s department of applied psychology and human development, to Julia Hanigsberg, the president and CEO of Holland Bloorview Kids Rehabilitation Hospital, the show seeks to highlight people that students look up to and who they may think have never failed at anything in their life.

“Far from it,” says Propp. “They have been falling flat on their face, probably more times than you have. And they’ve picked themselves up and started again.”

As someone who grew up not liking school, Propp sees herself going on her own accidental adventure. In the Globe and Mail, Propp wrote in 2018 that she’s had to overcome many personal challenges and disclosed that she had undiagnosed ADHD.

“Finishing my first degree was, you know, a feat in and of itself,” says Propp, whose PhD focus is on the biological and psychological underpinnings of disruptive behaviour disorders in children.

“Now on my third [degree], I think it’s come a real full circle.”

Propp quickly assembled a team with a variety of skills – from media production to interviewing – and who are able to play off each other’s strengths. Propp praises Bronwyn Lamond, a co-host, for her masterful organizational skills.

Drawing inspiration and training tips from podcasters like Ira Glass, the host of “This American Life,” the team wants to continue growing in the short term.The first season will run until June and the team will be back for a second season next September, with episodes available on podcast apps.

In the meantime, the team has learned new and surprising things about their guests.

“It’s been so surprising what we’ve learned about these people,” says Lamond, a second-year PhD student in school and clinical child psychology. “We’re strangers to everyone, but asking and having so many people say yes immediately to being on the podcast alone – and then getting really deep into these personal stories – has been really eye opening.”