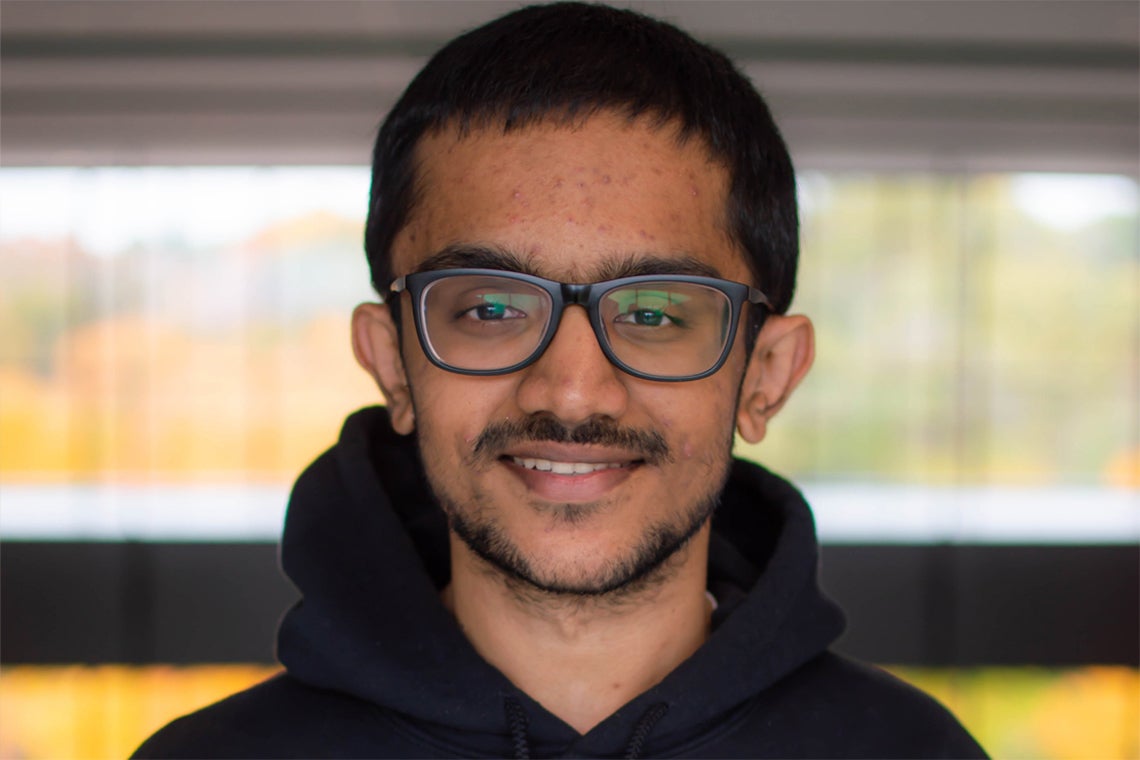 Abraham Mathew says he didn't initially realize the significance of being awarded the John Black Aird Scholarship, which goes to U of T's top undergraduate – until a friend texted "OMG" (photo courtesy Abraham Mathew)

Is time travel possible? That’s a question that helped land the University of Toronto’s top undergraduate a coveted spot at the Massachusetts Institute of Technology this fall – in a program that admits only five people a year.

U of T Mississauga’s Abraham Mathew – winner of the John Black Aird Scholarship, awarded to U of T’s top undergraduate student across the university’s three campuses – is looking forward to pursuing his PhD at one of the world’s leading philosophy programs.

“I want to change the perception that philosophy is obsolete, or is academics in their ivory towers,” Mathew says. “It’s relevant to everyday life.”

His passion for the subject earned him two top departmental awards (Erindale Prize and Jacqueline Brunning Award), as well as the Governor General’s Silver Medal and the Aird Scholarship.

Mathew, who has a minor in ethics, law and society, graduated with a 4.0 GPA, an average he maintained throughout his time at U of T Mississauga.

“Abraham Mathew is easily one of the two or three most talented students ever to come through the UTM philosophy program,” says Diana Raffman, professor and chair of U of T Mississauga’s philosophy department. “His philosophical work, both written and oral, is in a different league.”

Mathew says he was surprised when he learned he won the award, admitting he didn’t initially realize the significance of it until he searched online and texted a friend, whose reaction was “OMG.”

Earning these awards was never something he consciously strived to achieve, he says, adding he just tried to do the best he could. Noting his program had more essays than exams, he credits his success to excellent time management.

Time will play a role in his studies at MIT, where his research will focus on metaphysics and the philosophy of time. That might sound abstract but, true to his mission to connect philosophy at a popular level, the paper he submitted for admittance to grad school asked: “Is time travel possible?”

The answer, of course, depends. One theory argues the past, present and future are equally real, and thus time travel would be possible with the right technology, while another suggests only the present is real. Whatever the answer might be, Mathew’s approach stirs the imagination and conjures images from science fiction, making philosophy relatable to a lay audience.

The Brampton, Ont. resident already has a head start when it comes to finding ways to show how fundamental philosophy is to society. As vice-president and later president of U of T Mississauga’s Philosophy Academic Society, Mathew and fellow society members found ways to move the club from a series of coffee chats between a handful of those interested in philosophy to events that gathered more than 100 people. Their first successful lecture was on Halloween night and delved into the philosophy of evil. Another well-attended talk explored the ethics of abortion and asked when a fetus becomes a person.

Yet philosophy wasn’t what Mathew originally planned to study. He came to U of T Mississauga for the forensic sciences program. His initial foray into philosophy was the result of an elective.

Focused on the sciences, he opted for a humanities course, choosing a first-year philosophy course that turned out to be “super fantastic.” It started with logic and gave him an opportunity to read different philosophers – and later tackle big questions such as “What is knowledge?” and “Does God exist?”

That first taste prompted him to take a second course and by second year Mathew had decided to leave forensic sciences and focus on philosophy.

Now, instead of a future in law, he’s looking to build a future in academia as a researcher, where he can help demonstrate the relevance and importance of philosophy.

His professors are looking forward to seeing what more he’ll achieve at MIT.

“There is no doubt in our minds that we are looking at the start of a major career in philosophy,” says Raffman.