From soldier to soup-maker, Kevin White's path to becoming a U of T researcher was unconventional to say the least 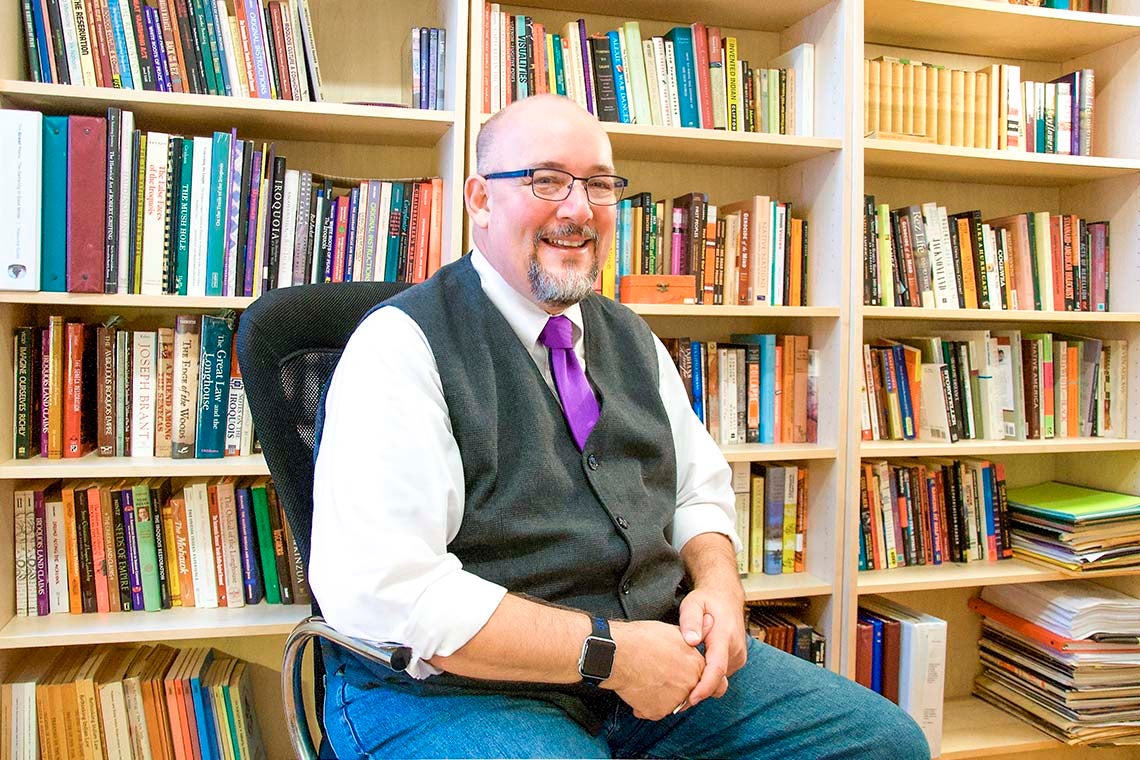 Kevin White was a short-order cook, a state park landscaper, an infantryman in the United States Army and a college dropout before becoming a professor of Indigenous studies.

But perhaps his most curious role has been that of corn soup-maker.

“Iroquois white corn soup was a luxury that we’d get just a handful of times a year,” recalls White, who joined the Faculty of Arts & Science this past fall as an assistant professor in the department for the study of religion and the Centre for Indigenous Studies.

“So, I learned how to make the soup from others in Rochester. We had friendly rivalries about who made the best corn soup.” Born and raised in Rochester, N.Y., White hails from Akwesasne Mohawk nation and spent the past 16 years teaching Native American studies at the State University of New York at Oswego, where his work focused on Indigenous religions, spirituality and systems of knowledge.

So, how did he find himself in the soup business?

An ancient corn comes back to life

White’s mentor and PhD supervisor, John Mohawk, was the visionary and founder of the Iroquois White Corn Project, which revitalized the farming, distribution and preparation of the 1,400-year-old heirloom seed – one that is significantly higher in nutritional value than today’s mass-produced yellow corn.

Mohawk, a widely respected and influential Indigenous scholar and activist who died in 2006, facilitated the processing of the corn so that Indigenous communities might return to a more traditional diet.

“John and I experimented with the corn, making roasted corn flour and hominy out of it, and we had a lot of different dishes,” says White. “We were distributing it to chefs all over the U.S. in the early 2000s. They said it was so aromatic, the scent would fill their kitchen for weeks.”

During his culinary years, White was invited to apprentice under an established chef who wanted to support him through advanced culinary training – an invitation he declined.

“I love cooking,” White told him, “but I really want to be a professor.”

White’s turn from cooking to graduate studies was one of many forks in the road.

“I joined the military because I flunked out of college my freshman year,” says White, who completed two years of active duty, mostly in Korea and Fort Stewart, Ga.

“But I really wasn’t suited for a military career. I’m an independent thinker, and I’ve always tried to speak truth to power.”

White has now spent almost two decades researching and writing about Indigenous religions and epistemologies, including various versions of the Iroquois creation story – the topic of his PhD dissertation and ongoing work.

He has also mentored Indigenous students navigating non-traditional paths to post-secondary education – and he looks forward to helping out in U of T’s Transitional Year Program, where he has already conducted a guest lecture.

“I think the core value of Indigenous Peoples is building communities,” says White. “So, it’s been important for me to help Indigenous students speak up for themselves, navigate systems and question authority when their voices are not being heard.”

Throughout his meandering path, White has always persevered.

“Sometimes you have to have faith in yourself even when others don’t. Sure, I had moments where I questioned things, but I never wavered. I knew I wanted to do exactly what I’m doing right now.”

White has been actively seeking an opportunity to move to Canada in recent years. In 2017, he was a visiting Fulbright Fellow at Brock University and worked with the Indigenous Knowledge Centre at Six Nations Polytechnic near Brantford, Ont.

“I wanted to come to Canada because my research has been centred on creation,” says White, “which comes mainly out of the Six Nations in what is now Ontario. There’s also a lot of work that I’m trying to tackle on what I term orality or oral culture.”

The cultural climates in Canada and at U of T were no small influence on White’s decision to pull up stakes and move to Toronto.

“There’s the Truth and Reconciliation Commission here in Canada, and that’s not even a thought on anybody’s agenda in the U.S.,” he says.

“And while it’s an ongoing process, I know U of T is making some good strides in these areas. In my previous institution, I was literally the only Indigenous faculty member. The beauty of U of T is there’s a wealth of voices. And I want to become more knowledgeable about other Indigenous communities here so I can have good conversations.”

Having just settled into his apartment on campus a few months ago, White is excited to roll up his sleeves and continue his research into the ways storytelling forges relationships between humans, their surroundings and their beliefs.

“Many scholars in all kinds of disciplines these days are talking about how we need to establish reciprocal relationships between humans, environment, systems of knowledge and so on. For Indigenous Peoples, that’s not a new way of thinking,” says White.