By raising lab coats to the rafters, U of T biomedical engineering lab celebrates its student MVPs 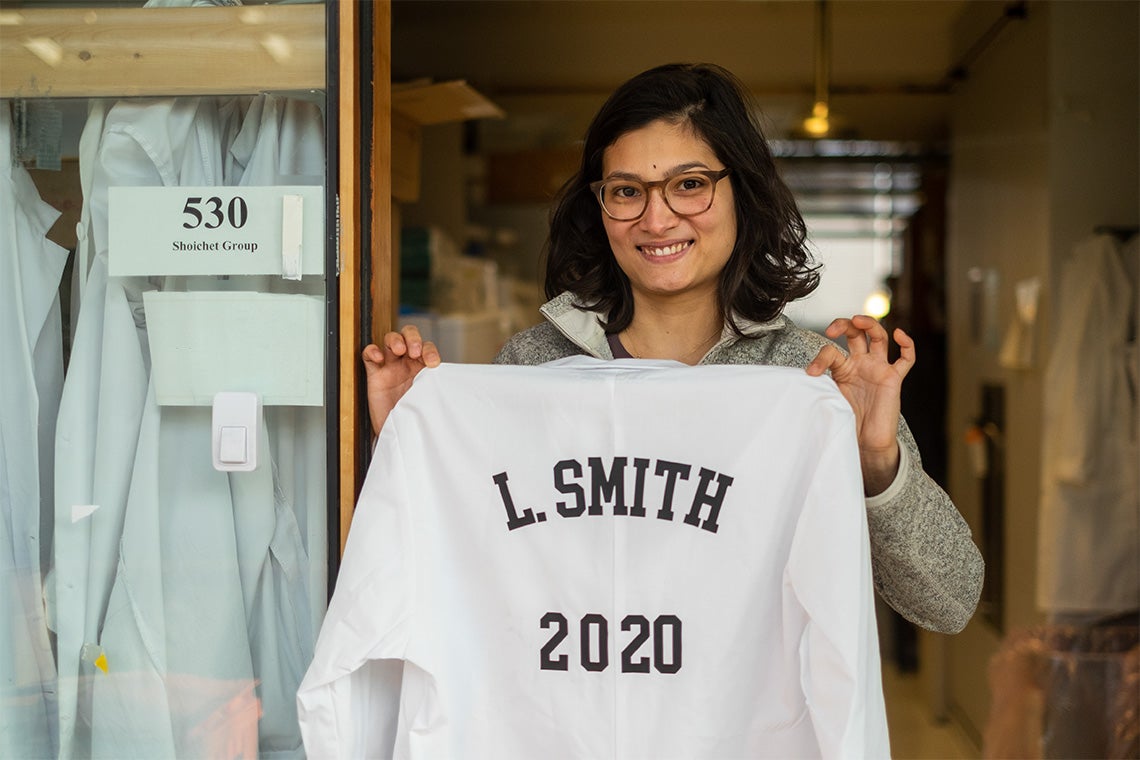 Laura Smith, a PhD student in chemical and biomedical engineering, holds up a lab coat bearing her name that will be hung in Molly Shoichet's lab following her graduation next year (photo by Geoffrey Vendeville)

Baker, McLean and Wang aren’t exactly household names but they have a special place in the memories of researchers in Molly Shoichet’s lab.

They’re among the former University of Toronto PhD student all-stars whose names appear on the back of lab coats hanging from pillars in Shoichet’s laboratory on the fifth floor of the Donnelly Centre for Cellular and Biomolecular Research.

For 15 years and counting, Shoichet and her students have celebrated PhD candidates who successfully defend their theses by unveiling a white coat with their name and graduation year on the back. Then they hang the spotless lab coats in the same way the Maple Leafs and other sports teams raise a veteran player’s jersey to the rafters.

In hockey, the tradition commemorates a lifetime of success on the ice, but in Shoichet’s lab it marks the beginning of a new chapter in the student’s career.

It’s one of the many, under-the-radar ways U of T faculty foster a sense of community among students in their labs as they collectively put their minds to solving mind-boggling scientific questions.

“It really is a special place here,” says Shoichet, a University Professor in department of chemical engineering and applied chemistry and the Institute of Biomaterials and Biomedical Engineering (IBBME) in the Faculty of Applied Science & Engineering.

“The students really do help each other succeed.”

Laura Smith, a PhD student in Shoichet’s lab, has prepared the white coats for past unveiling ceremonies. She used to iron on the letters herself, one by one, but she now gets the job done through a T-shirt company.

“I often get questions from them because they say, ‘This is a very unusual job for us,’” Smith says.

After a white coat is hoisted onto a pillar in the lab, usually following the student’s thesis defence, the graduating student is asked if they want to share a few words of wisdom. Most, it turns out, choose to save their advice for a later lunch date. “They’re like, ‘I just defended my thesis for two hours. I’m good,’” Smith says.

The graduating students also receive a glass mug with the U of T crest that members of the lab have signed with a drill pen.

“It’s part of our community experience,” Smith says about the ceremony. “We’re kind of a family here and we all help each other.”

The uniform-retiring tradition isn’t the only thing the Shoichet lab has in common with the sports world. Teamwork is essential in the lab, which combines engineering, biology and chemistry to find ways to not just stop the progression of diseases like blindness, but reverse their course.

“I think it’s true more and more for science in general, but especially for our science which is so multidisciplinary,” says Shoichet, who is a Canada Research Chair in Tissue Engineering. 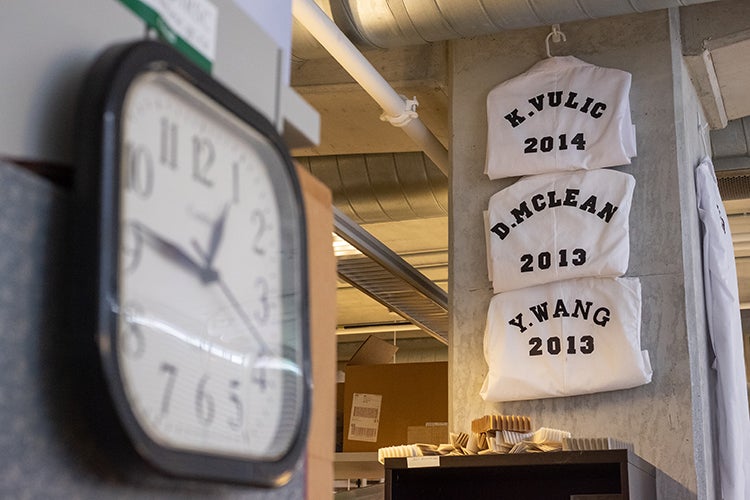 Other campus labs take a different approach to celebrating outgoing PhD students. Paul Santerre, a researcher in the Faculty of Dentistry and IBBME, gives each of his graduating PhD students a copy of The Alchemist by Brazilian novelist Paul Coehlo.

The book carries special meaning for Santerre. Fifteen years ago, his brother, a mountain climber who had scaled Himalayan peaks, died in the Rockies. Santerre found a copy of the novel still shrink-wrapped in his brother’s home.

“Once I read it, I asked my wife, my two children, neighbours and siblings to read it as it had the message for a successful life in it, and it explained beautifully the path that we are on,” he told U of T News.

“Now I share it with my graduating PhDs as they are one of society’s most precious legacies that we must nurture towards success.”

As for Smith, she expects to graduate from Shoichet’s lab next year with a PhD in chemical and biomedical engineering. Her thesis focuses on glioblastoma, an aggressive type of cancer that affects the brain or spinal cord – the same cancer that took the life of The Tragically Hip frontman Gord Downie two years ago. The cancer spreads to normal brain cells, making it difficult or even impossible to treat it with surgery, radiation or chemotherapy.

Smith studies cell migration in a viscous gel that mimics the tumour environment in the brain to get a better understanding of the cellular processes at work in the spread of glioblastoma.

“Hopefully what we discover is something targetable,” she says, adding that she plans to continue doing research once she obtains her PhD.