Out of thin air: U of T researchers shorten path to capturing and recycling CO2 with new process 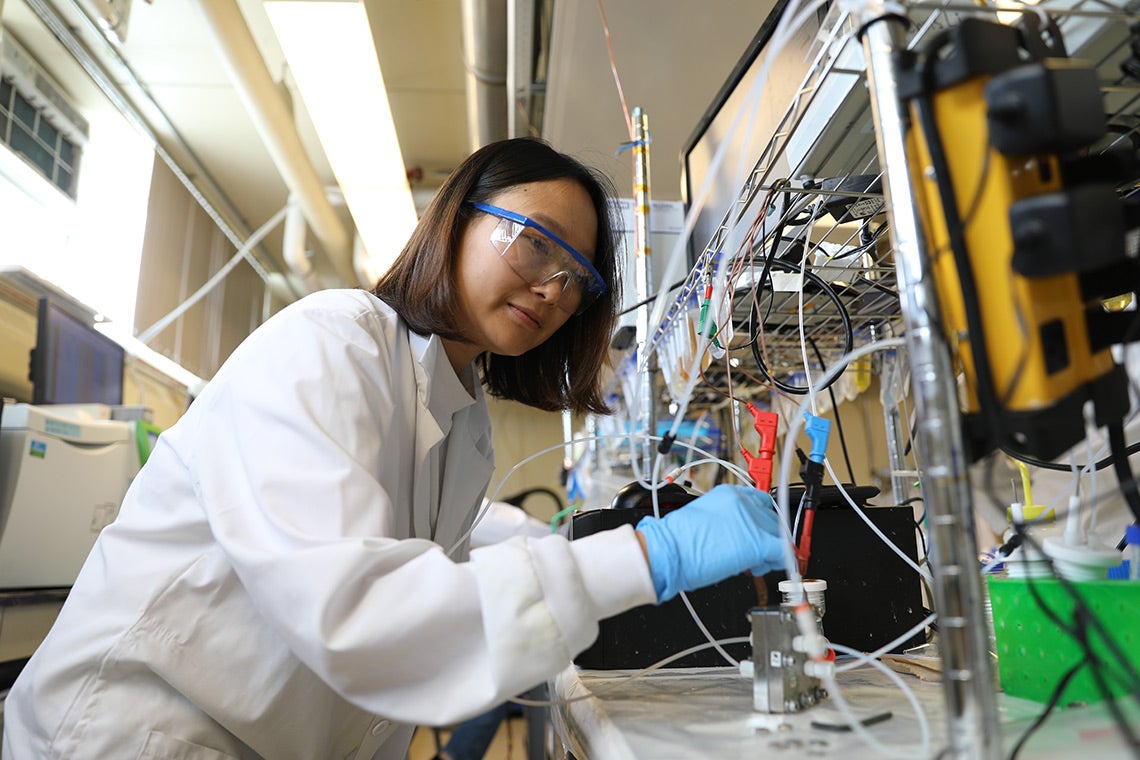 Geonhui Lee operates an electrolyzer capable of transforming dissolved carbonate into CO2 and then into syngas. The device offers a shorter path for converting atmospheric carbon into commercially valuable products (Photo by Marit Mitchell)

A research team from the University of Toronto has developed a new electrochemical path to transform CO2 into valuable products such as jet fuel or plastics. The technology could significantly improve the economics of capturing and recycling carbon directly from the air.

“Today, it is technically possible to capture CO2 from air and, through a number of steps, convert it to commercial products,” says University Professor Ted Sargent, in the Edward S. Rogers department of electrical and computer engineering, who led the research team.

“The challenge is that it takes a lot of energy to do so, which raises the cost and lowers the incentive. Our strategy increases the overall energy efficiency by avoiding some of the more energy-intensive losses.”

Direct-air carbon capture is an emerging technology in which companies aim to produce fuels or plastics from carbon that is already in the atmosphere, rather than from fossil fuels. Canada’s Carbon Engineering, which has built a pilot plant in Squamish, B.C., captures CO2 by forcing air through an alkaline liquid solution. The CO2 dissolves in the liquid, forming a substance called carbonate.

In order to be fully recycled, the dissolved carbonate is normally turned back into CO2 gas, and then into chemical building blocks that form the basis of fuels and plastics. One way to do this is to add chemicals that convert the carbonate into a solid salt. This salt powder is then heated at temperatures above 900 C to produce CO2 gas that can undergo further transformations. The energy required for this heating drives up the cost of the resulting products.

The U of T team’s alternative method applies an electrolyzer, a device that uses electricity to drive a chemical reaction. Having previously used electrolyzers to produce hydrogen from water, they realized they could also be used to convert dissolved carbonate directly back into CO2, skipping the intermediate heating step entirely.

“We used a bipolar membrane, a new electrolyzer design that is great at generating protons,” says Geonhui Lee, who along with postdoctoral fellow Y. Chris Li, is among the lead authors of a new paper in ACS Energy Letters that describes the technique.

“These protons were exactly what we needed to convert the carbonate back into CO2 gas.”

Their electrolyzer also contains a silver-based catalyst that immediately converts the CO2 produced into a gas mixture known as syngas. Syngas is a common chemical feedstock for the well-established Fischer-Tropsch process, and can be readily turned into a wide variety of products, including jet fuel and plastic precursors.

“This is the first known process that can go all the way from carbonate to syngas in a single step,” says Sargent.

While many types of electrolyzers have been used to convert CO2 into chemical building blocks, none of them can deal effectively with carbonate. Furthermore, the fact that CO2 dissolved in liquid turns into carbonate so readily is a major problem for existing technologies.

“Once the CO2 turns into carbonate, it becomes inaccessible to traditional electrolyzers,” says Li. “That’s part of the reason why they have low yields and low efficiencies. Our system is unique in that it achieves 100 per cent carbon utilization: no carbon is wasted. It also generates syngas as a single product at the outlet, minimizing the cost of product purification.”

In the lab, the team demonstrated the ability to convert carbonate to syngas at an overall energy efficiency of 35 per cent, and the electrolyzer remained stable for more than six days of operation.

Sargent says that more work will be needed to scale up the process to the levels needed for industrial application, but that the proof-of-concept study demonstrates a viable alternative path for direct-air carbon capture and utilization.

“It goes a long way toward answering the question of whether it will ever be possible to use air-captured CO2 in a commercially compelling way,” says Sargent.

"This is a key step toward closing the carbon loop.”