No assembly required: U of T researchers automate microrobotic designs 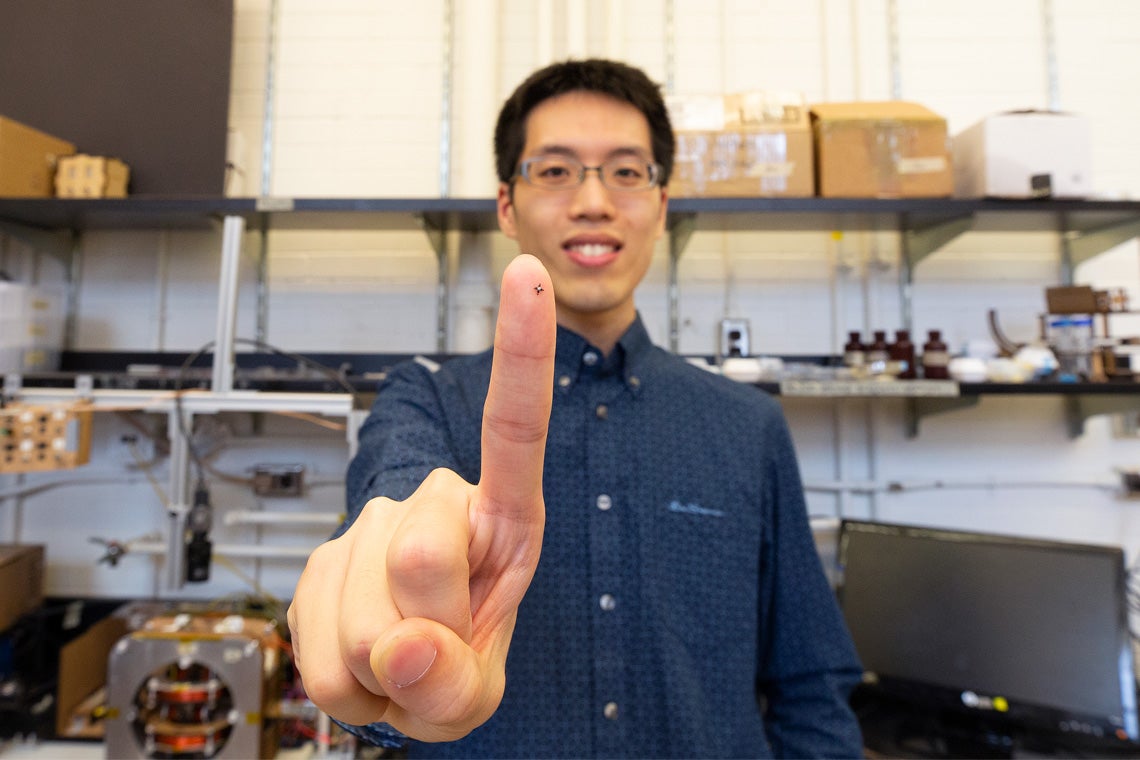 Assembling a microrobot used to require a pair of needle-nosed tweezers, a microscope, steady hands and at least eight hours. But now researchers at the University of Toronto’s Faculty of Applied Science & Engineering have developed a method that requires only a 3D printer and 20 minutes.

In the lab of Eric Diller, an assistant professor in the department of mechanical and industrial engineering, researchers create magnetized microrobots – the size of the head of a pin – that can travel through fluid-filled vessels and organs within the human body. Diller and his team control the motion of these microrobots wirelessly using magnetic fields.

Each microrobot is built by precisely arranging microscopic sections of magnetic needles atop a flat, flexible material. Once deployed, the researchers apply magnetic fields to induce microrobots to travel with worm-like motion through fluid channels, or close its tiny mechanical “jaws” to take a tissue sample.

“These robots are quite difficult and labour-intensive to fabricate because the process requires precision,” says Tianqi Xu, a master’s candidate in engineering. “Also because of the need for manual assembly, it’s more difficult to make these robots smaller, which is a major goal of our research.”

That is why Xu and his labmates developed an automated approach that significantly cuts down on design and development time, and expands the types of microrobots they can manufacture. Their findings were published today in Science Robotics.

Smaller and more complex microrobots are needed for future medical applications, such as targeted drug delivery, assisted fertilization or biopsies.

“If we were taking samples in the urinary tract or within fluid cavities of the brain – we envision that an optimized technique would be instrumental in scaling down surgical robotic tools,” says Diller.

To demonstrate the capabilities of their new technique, the researchers devised more than 20 different robotic shapes, which were then programmed into a 3D printer. The printer then builds and solidifies the design, orienting the magnetically patterned particles as part of the process.

“Previously, we would prepare one shape and manually design it, spend weeks planning it, before we could fabricate it. And that’s just one shape,” says Diller. “Then when we build it, we would inevitably discover specific quirks – for example, we might have to tweak it to be a little bigger or thinner to make it work.”

“Now we can program the shapes and click print,” adds Xu. “We can iterate, design and refine it easily. We have the power to really explore new designs now.”

The researchers’ optimized approach opens the doors for developing even smaller and more complex microrobots than the current millimetre-size.

“We think it’s promising that we could one day go 10 times smaller,” says Diller.

Diller’s lab plans to use the automated process to explore more sophisticated and complicated shapes of microrobots.

“As a robotics research community, there’s a need to explore this space of tiny medical robots,” adds Diller. “Being able to optimize designs is a really critical aspect of what the field needs.”

The research was supported by Canada’s Natural Sciences and Engineering Research Council (NSERC).