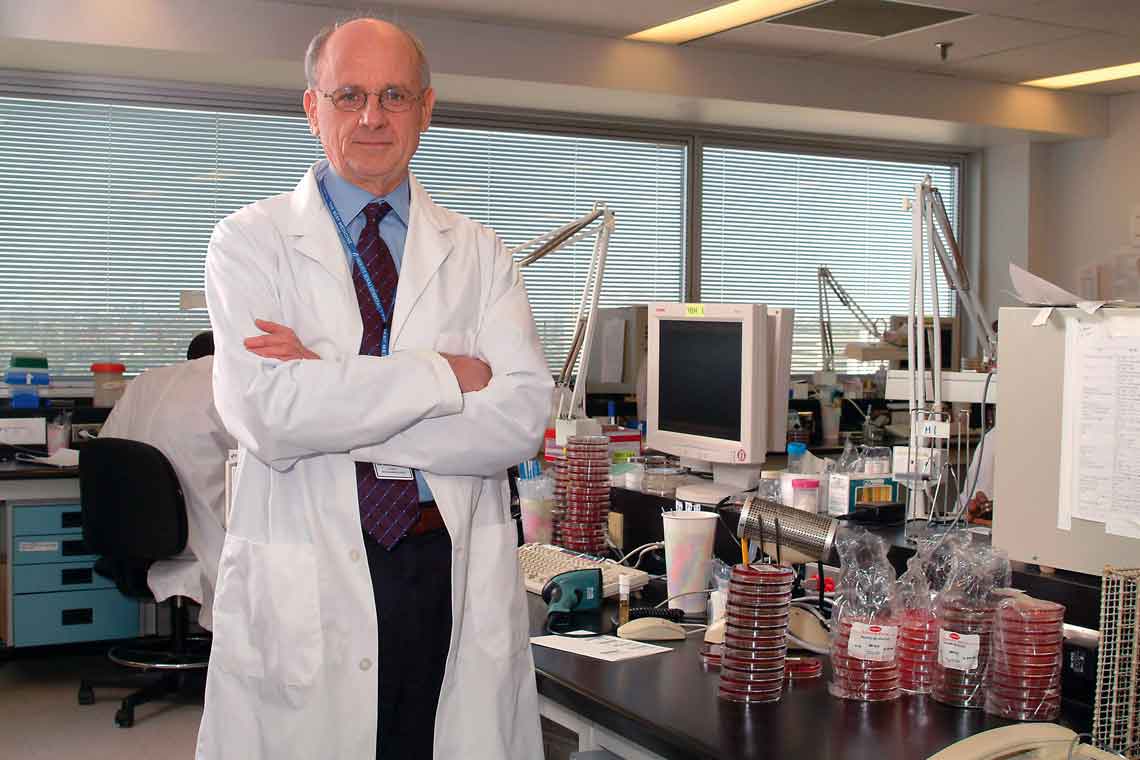 "It's a fitting tribute to an academic microbiologist who excelled in teaching, research and clinical care"

An international group of microbiologists has honoured the memory of University of Toronto professor Donald Low by using his name for a newly discovered strain of bacteria.

The group chose the name Corynbacterium lowii to honour Low, who was a professor and division head of microbiology in the department of laboratory medicine and pathobiology (LMP) at the university and microbiologist-in-chief at Mount Sinai Hospital.

"This is an appropriate way for colleagues to honour Don. He had a large impact on the fields of microbiology, infectious disease and public health in Canada. He was known around the world for his contributions," said Professor Avrum Gotlieb, interim chair of LMP at U of T. "It's a fitting tribute to an academic microbiologist who excelled in teaching, research and clinical care."

The research group published a paper with the name and a description of the new bacteria online last month in the International Journal of Systematic and Evolutionary Microbiology. Scientists in Belgium and Japan had recovered the species from patients with eye infections.

The lead author on the paper was Kathryn Bernard, head of the special bacteriology laboratory unit at the Canadian National Microbiology Laboratory in Winnipeg. Bernard said she began using the name C. lowii in 2013, while her lab was running tests on the bacteria and as news of Low's illness spread among researchers and clinicians across Canada.

"We all knew of Don as a well-established Canadian and world-renowned microbiologist, who was also a key clinician and scientific voice during major outbreaks including SARS in 2003," said Bernard.

"In 2013, many of us had heard that Don was ill, and then after he died his family put out that memorable plea for legalizing assisted death for people who are terminally ill. Those events coincided with our decision to name the species after him."

Bernard asked her coauthors in Belgium and Japan if the name C. lowii would be acceptable, and they agreed. Low's widow Maureen Taylor, a former CBC journalist who is now a physician assistant, also agreed to the naming.

Since Low's death, Canada has moved to legalize assisted suicide, based on a decision by the Supreme Court in 2015. The federal government has proposed a bill that would allow doctor-assisted suicide for people with incurable conditions whose death is reasonably foreseeable.

"I expect Don would be pleased with the progress on doctor-assisted suicide in recent years," said Bernard. "But first and foremost, we considered his international reputation in the microbiology community in naming the bacteria."

At the departmental level, Low won LMP's Teaching Award in 1991 and 1994 and the Distinguished Service Award in 2004.

Faculty of MedicineLaboratory Medicine and Pathobiology