Graphene can withstand over one billion high-stress cycles before failing, U of T researchers find 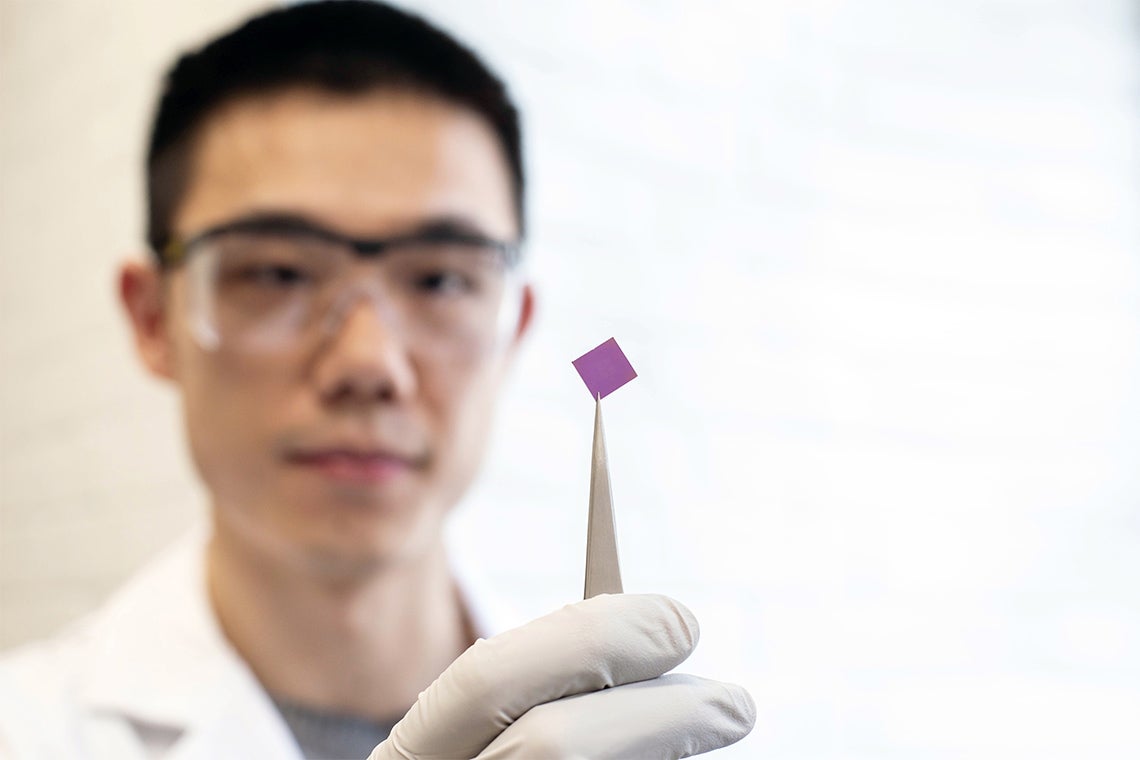 PhD candidate Teng Cui holds up a silicon chip with half a million embedded tiny holes. By stretching graphene across the holes, Cui was able to measure its resistance to mechanical fatigue (photo by Daria Perevezentsev)

Graphene is a paradox: It is the thinnest material known to science, yet also one of the strongest. Now, researchers at the University of Toronto’s Faculty of Applied Science & Engineering have shown that graphene is also highly resistant to fatigue – able to withstand more than a billion cycles of high stress before it breaks.

Graphene resembles a sheet of interlocking hexagonal rings, similar to the pattern seen in bathroom flooring tiles. At each corner is a single carbon atom bonded to its three nearest neighbours. While the sheet could extend laterally over any area, it is only one atom thick.

The intrinsic strength of graphene has been measured at more than 100 gigapascals, among the highest values recorded for any material. But materials don’t always fail because the load exceeds their maximum strength. Small repetitive stresses can weaken materials by causing microscopic dislocations and fractures that slowly accumulate over time, a process known as fatigue.

“To understand fatigue, imagine bending a metal spoon,” says Tobin Filleter, an associate professor in the department of mechanical and industrial engineering and one of the senior authors of the study. “The first time you bend it, it just deforms. But if you keep working it back and forth, eventually it’s going to break in two.”

The research team – consisting of Filleter, Associate Professor Chandra Veer Singh and Professor Yu Sun, as well as their students and collaborators at Rice University – wanted to know how graphene would stand up to repeated stresses. Their approach included both physical experiments and computer simulations.

The results were recently published in the journal Nature Materials.

“In our atomistic simulations, we found that cyclic loading can lead to irreversible bond reconfigurations in the graphene lattice, causing catastrophic failure on subsequent loading,” says Singh, who along with postdoctoral fellow Sankha Mukherjee led the modelling portion of the study. “This is unusual behaviour in that while the bonds change, there are no obvious cracks or dislocations, which would usually form in metals, until the moment of failure.”

PhD candidate Teng Cui, who is supervised by Filleter and Sun, used the Toronto Nanofabrication Centre to build a physical device for the experiments. The design consisted of a silicon chip etched with half a million tiny holes only a few micrometres in diameter. The graphene sheet was stretched over these holes, like the head of a tiny drum. 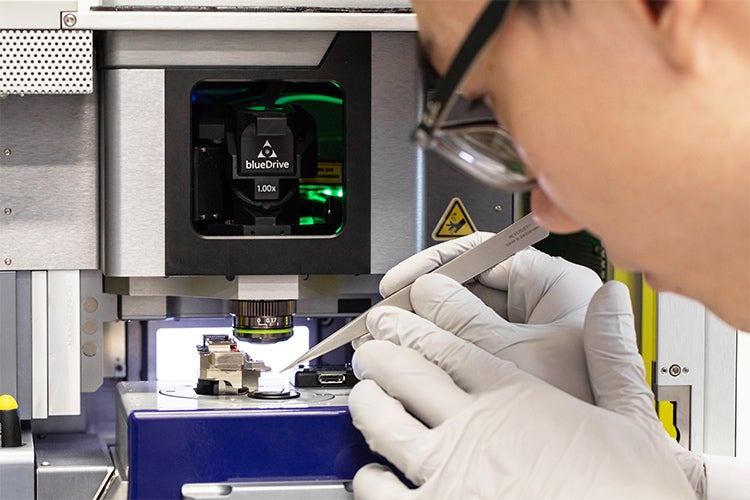 Using an atomic force microscope, Cui then lowered a diamond-tipped probe into the hole to push on the graphene sheet, applying anywhere from 20 to 85 per cent of the force that he knew would break the material.

“We ran the cycles at a rate of 100,000 times per second,” says Cui. “Even at 70 per cent of the maximum stress, the graphene didn’t break for more than three hours, which works out to over a billion cycles. At lower stress levels, some of our trials ran for more than 17 hours.”

As with the simulations, the graphene didn’t accumulate cracks or other tell-tale signs of stress – it either broke or it didn’t.

“Unlike metals, there is no progressive damage during fatigue loading of graphene,” says Sun. “Its failure is global and catastrophic, confirming simulation results.”

The team also tested a related material, graphene oxide, which has small groups of atoms such as oxygen and hydrogen bonded to both the top and bottom of the sheet. Its fatigue behaviour was more like traditional materials in that the failure was more progressive and localized. This suggests that the simple, regular structure of graphene is a major contributor to its unique properties.

“There are no other materials that have been studied under fatigue conditions that behave the way graphene does,” says Filleter. “We’re still working on some new theories to try and understand this.”

In terms of commercial applications, Filleter says that graphene-containing composites – mixtures of conventional plastic and graphene – are already being produced and used in sports equipment such as tennis rackets and skis.

In the future, such materials may begin to be used in cars or in aircraft, where the emphasis on light and strong materials is driven by the need to reduce weight, improve fuel efficiency and enhance environmental performance.

“There have been some studies to suggest that graphene-containing composites offer improved resistance to fatigue, but until now, nobody had measured the fatigue behaviour of the underlying material,” Filleter says. “Our goal in doing this was to get at that fundamental understanding so that in the future, we’ll be able to design composites that work even better.”