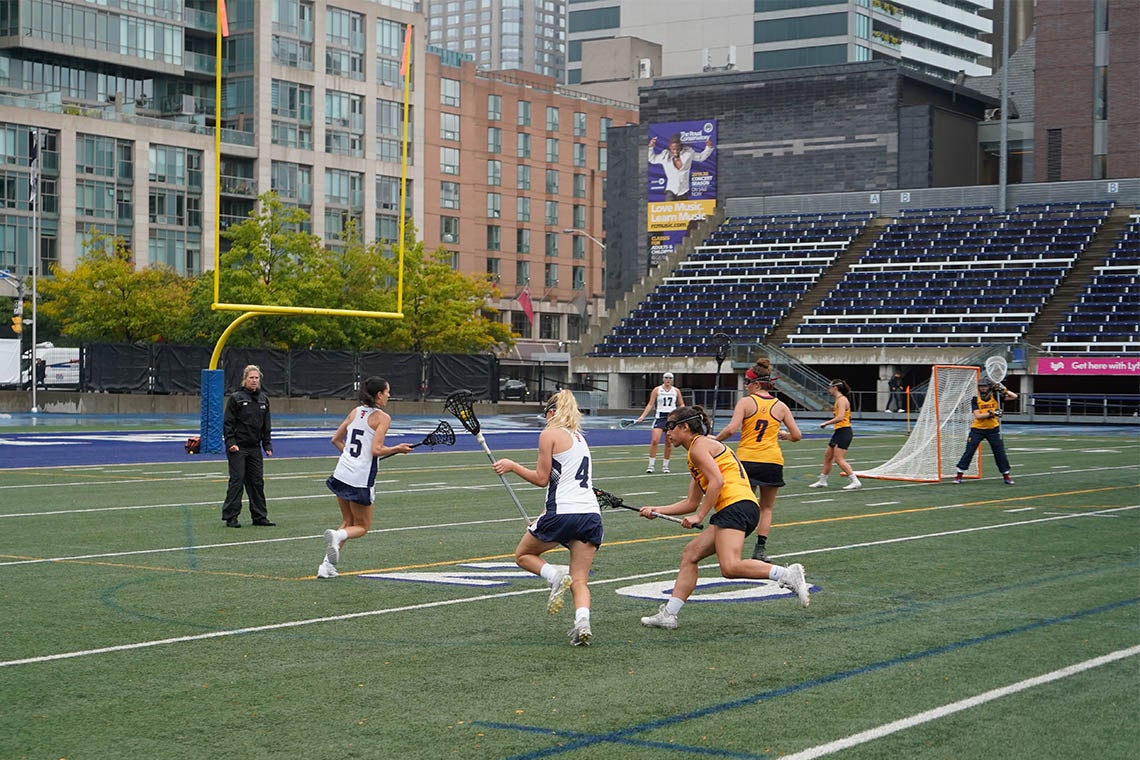 The study involved 146 athletes, both men and women, who competed for U of T in various sports, including lacrosse (photo by Jimmy Wang)

In the first longitudinal evaluation of its kind, researchers from the University of Toronto and St. Michael’s Hospital have discovered that one year after the event of a concussion and receiving medical clearance, signs of concussion-related injuries can still be observed in the brain.

The findings were published this fall in the journal Neurology.

“The objective of our study was to understand how the underlying brain physiology is changed after injury, and how long it takes to recover afterwards,” said U of T alumnus Nathan Churchill, a researcher at St. Michael’s Hospital and the study’s lead author.

“Looking at brain activity, blood flow and structure, we saw that many of the things that were disturbed at the early stages of concussion were still present after being medically cleared to ‘return the play.’”

Using magnetic resonance imaging (MRI) technology, the concussed brains of 24 athletes from U of T sports teams, assessed previously at the David L. MacIntosh Sport Medicine Clinic, were scanned at regular intervals: an average of four days after injury, after medical clearance to return to play (RTP) and one year after RTP. A control group of 122 athletes without concussions were also imaged to act as a reference cohort for the concussed athletes.

Of the 146 athletes included in this study, men and women were equally represented in both groups and competed in sports like water polo, lacrosse, hockey and football. All athletes also completed baseline assessments of symptoms and cognition.

By evaluating different aspects of brain physiology, including function, connectivity, blood flow and structure, researchers found that some components demonstrated different patterns of long-term recovery, while others showed non-significant concussion effects at the one-year marker after return to play.

“We found it interesting that even one year later, with no other intervening concussions or medical issues present, there were still lingering effects in the brains of previously injured athletes,” said Tom Schweizer, a senior corresponding author on the paper, associate professor with the division of neurosurgery at U of T’s department of medicine and interim director of the Keenan Research Centre for Biomedical Science at St. Michael’s Hospital.

“Particularly, we observed persistent long-term effects like a reduction in cerebral blood flow and an increase in white matter mean diffusivity.”

The researchers suspect that reduced cerebral blood flow (CBF), which is needed to deliver oxygen and nutrients to brain tissues, may be linked to subtle long-term decreases in grey matter volume after concussions. Grey matter tissues play specialized roles in the brain and are involved in planning and decision-making skills, as well as temporal areas associated with language and memory.

The increased presence of white matter mean diffusivity is also concerning because it demonstrates that concussed athletes may still be experiencing microscopic signs of swelling – possibly a sign of inflammation in the brain – suggesting that longer than a year may be required for it to return to normal function.

“It’s important to remember that the athletes in this study are in the ‘clear,’ as they’ve received full medical clearance to return to play and they’re not complaining of any effects,” said Schweizer. “So, it’s not as though they’re walking around with a bunch of symptoms and they’re not well. The brain is fantastic in terms of how it is able to fix itself and adopt a new normal,” .

This is one of the reasons that the researchers believe more investigation into the effects of concussion-related brain injuries is required.

Speaking about the impact of this study, Schweizer said: “Traditionally, a concussion has been defined as a mild injury to the brain. But we now know there are potential long-term effects from concussions, which is knowledge we didn’t have before. We’re starting to realize that with concussions, even if someone is asymptomatic, there can still be effects present in the brain that are long-lasting. This is important to know and treat seriously.”

As a followup to this novel research on concussions, Churchill and Schweizer are working on new studies that serve to examine the brain over a longer timespan.